This Day in History: Power Outage

Once upon a time, Guy Gardner was an insufferable jerk who was so insufferable that he was actually kicked out of the Green Lantern Corps. Guy being Guy, that didn't stop him for long. In fact, he took on the entire Corps just to get his hand on Sinestro's yellow power ring, which, being Sinestro's ring, had a few quirks of its own, as Guy discovered in Guy Gardner #2, released on this date 29 years ago today.

I'd sell my soul to Neron for hair like that.

That Guy Is Always Angry

Long before they became breakout stars on the Batman: The Long Halloween, the team of Jeph Loeb and Tim Sale honed their long-form revisionist mysteries style on Challengers of the Unknown.

The limited series focuses on the aftermath of an unintentional tragedy that disbanded the titular Silver Age super team. Booster Gold never appeared in any of the mini-series' 8-issues, but Skeets did. Kind of.

Metal Men? Inferior Five? Ragman? Brother Power the Geek? That's quite an odd assortment of lesser-known DC heroes. And that's Guy's point. When he made the statement in 1991, those characters had been barely seen for years.

Other than a single panel cameo alongside other Silver Age castaways in Millennium #8 (1988), the Challengers hadn't been seen since Crisis on Infinite Earths in 1986, and few of the others had done much better.

In fact, the only character Guy lists who had accrued any significant post-Crisis continuity was Skeets, who had been the sidekick of DC's first post-Crisis hero in 1986. Skeets was mothballed after the cancellation of Booster Gold volume 1 in 1988 and had ever since been stored in a JLI closet (as revealed in Adventures of Superman #476, 1991).

So while it seems like Guy is just being a jerk to reporter Harold Moffet, I like to think he's really concerned about the missing Skeets' welfare. What a good Guy!

We still don't have Booster Gold: the Movie lighting up marquees, but that doesn't mean that there's no news about Booster Gold in pictures. Two pieces from recent movies news reports:

1. Booster Gold was in Shazam!

That's Shazam! director David Sandberg responding with tongue held firmly in cheek to a question on Twitter. Before you laugh too hard, know that this might be the only way we ever get to see Booster Gold on the big screen.

2. Booster's first opponent, Blackguard, will be in Suicide Squad 2. 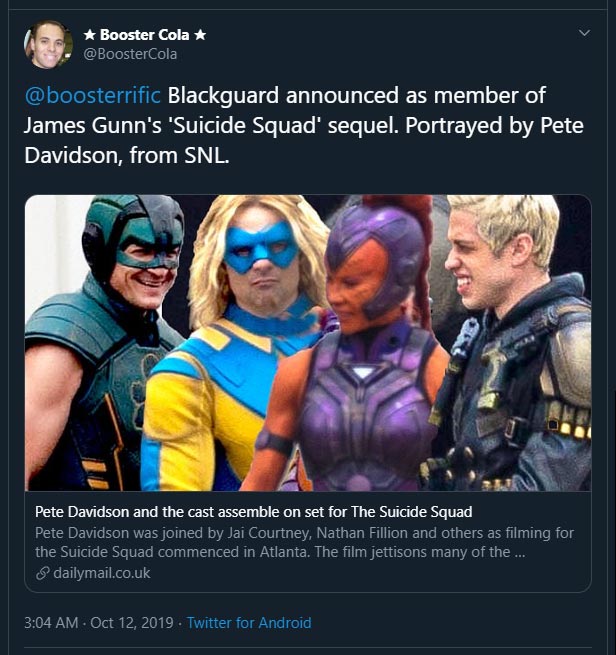 Booster Gold and Blackguard shared the cover to Booster Gold #1, so how is it that the minor villain will make it into movies before our hero? DC and Warner Bros must be taking Booster's "Greatest Hero You've Never Heard Of" tag seriously.

To be fair, Blackguard wasn't just a Booster Gold enemy. He was a minor player in the long-forgotten Underworld Unleashed event, accepting Neron's offer to become "The Human Killing Spree" and running afoul of Guy Gardner's clone, Joe. Blackguard didn't join the Suicide Squad until 2008. Spoiler alert: he didn't survive that experience.

For more pics of Davidson as Blackguard, follow the tweet's link to dailymail.co.uk. (Don't waste time worrying that Davidson is a little small for the part. Blackguard, like Booster, gains his strength from his power suit.)

UPDATE 2019-10-15: As Steven points out in the comments, it appears that Nathan Fillion, not Pete Davidson, will be playing Blackguard. That's very interesting, in part because Fillion looks more naturally like the comics incarnation of the character and partly because of the long history of fans wanting Fillion to play Booster Gold.

UPDATE 2021-08-05: The movie has finally been released, and it is definitely Pete Davidson in the role of Blackguard.

Thanks for the tweets, tipsters.

Cort posted on Oct. 14, 2019 at 7:45 PM
Heh, good grief, Blackguard before Booster. Suicide Squad under Gunn is going to be wild. Hopefully its a portent of things to come.

"Present day" Booster doesn't make a lot of sense considering hes from vastly in the future. But that'd be cool all the same.

Also I wanted to comment on the horse article from last friday. How did you possibly stumble upon that? Equestrian is so specific.

Thanks for all the articles all the same, as always!

Boosterrific [Official Comment] posted on Oct. 14, 2019 at 11:57 PM
Most of the esoteric stuff I find is from Google News alerts.

Steven Palchinski posted on Oct. 15, 2019 at 4:12 PM
You are very welcome, but I wouldn't call it a correction. It is more of a different theory behind who they actors may be.
I have seen the story you reference being shared by more outlets than the theory I reference, so take that as you may.

With the latest Superman event, "Leviathan," now unfolding in your Local Comic Shop, it's interesting to look back at another Superman event story with a curious connection to real history.

The JLA: Our Worlds At War one-shot, released 18 years ago today, was a middle chapter in the 2001 Superman "Out Worlds At War" crossover event. Booster Gold plays only a very brief role in the event as he, Blue Beetle, Guy Gardner, and Rocket Red fight to defend Russia from an alien invasion. This is Booster's only appearance in the entire comic:

It isn't the inclusion of the Justice League International that makes this issue a historic curiosity.

As mentioned, the issue's story details a surprise attack by a malignant force that opposes everything Superman stands for. To frame the magnitude and severity of this invasion, writer Jeph Loeb uses the words of United States President Franklin Delano Roosevelt to draw a direct, overt connection to a real tragedy in American history, specifically the Japanese surprise attack on Pearl Harbor 60 years earlier.

The irony here is that although this issue, with its focus on surprise attacks against America, was released on July 5, it has a cover date of September 2001.

And now you know the rest of the story. 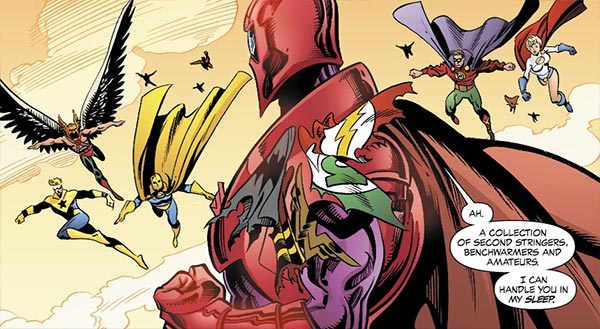 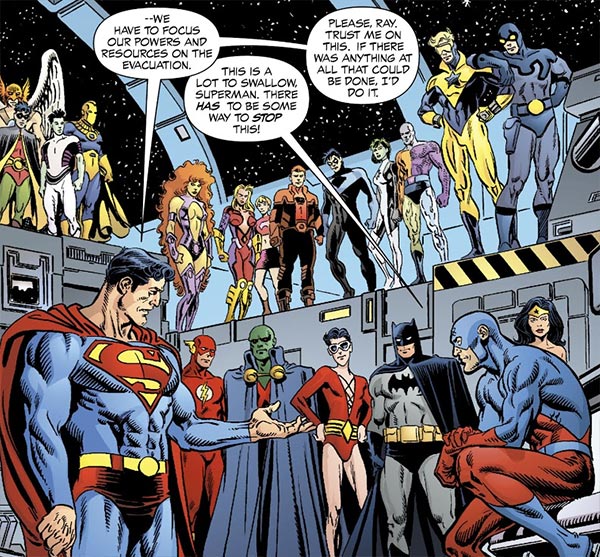