My Journey to Booster Gold Fandom

I'll let you in on a little secret: I wasn't always a huge Booster Gold fan.

Which is not to say that I didn't consider myself fortunate to have first met Booster Gold in 1985, when I found his debut appearance in Booster Gold Volume 1 #1 sitting on the magazine rack at my local convenience store. 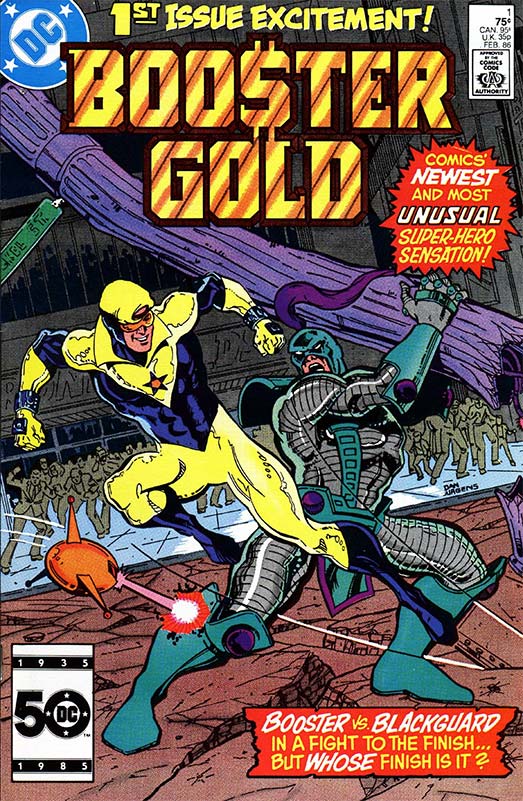 Even at a young age, I had seen enough Super Friends episodes to recognize that Booster Gold was lampooning traditional superhero ethos and consumer culture in a way I immediately found equally engaging and endearing. At the same time, I was still impressionable enough that if anyone had sold Flakies cereal, I would have begged my parents to buy a box.

I was devastated when his comics were canceled, but it would take another twenty years before I would call Booster Gold my favorite comic book character. The truth is that my first love in comics was Captain Carrot, the cosmic carrot-chewing leader of DC Comics' Amazing Zoo Crew. 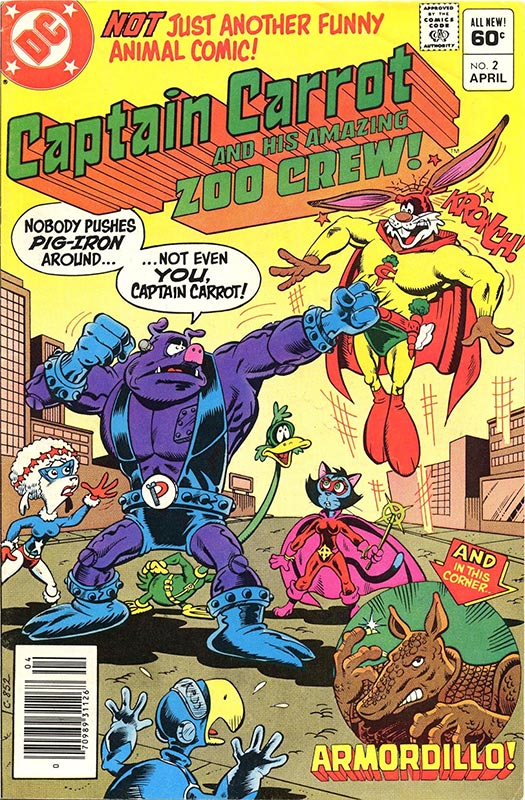 The Zoo Crew's adventures were overloaded with smile-inducing puns, and the pop culture references read like a long-form Mad Magazine segments. I read and re-read each issue until its cover fell off. I spent years rebuilding my collection with better copies. I think I currently own the entire series in triplicate.

It's entirely possible that Captain Carrot would still be my favorite comic book character if DC hadn’t canceled the Zoo Crew in 1983. Even then it took years before I was willing to let another character take his place at the top of my personal pantheon. After reading a lot of books from a lot of companies, I decided that my second love in comics was a key member appearing in Justice League International. However, that wasn't Booster Gold but Batman. 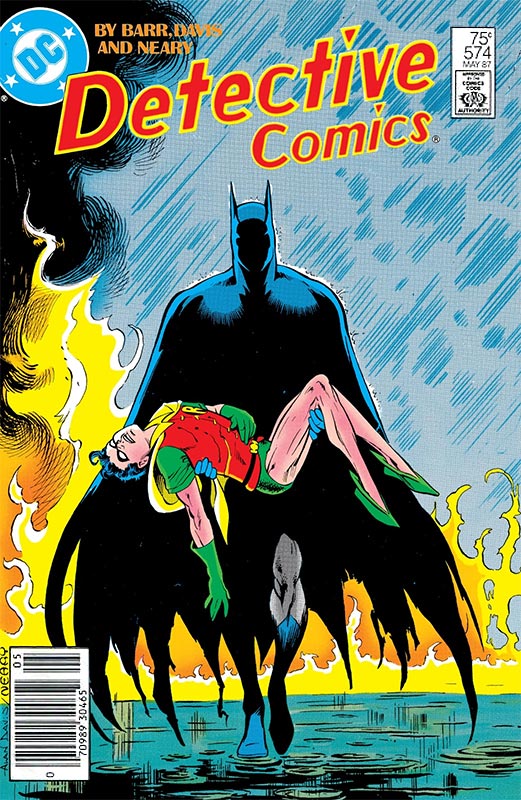 Specifically, I loved the Batman still more driven detective than deified super hero. I spent summers watching syndicated reruns of Batman's 1960s television series, and I grew up respecting his innate ability to solve riddles and escape deathtraps with nothing more than his honed mind.

As the 80s and 90s progressed, I bought every Batman comic I could afford. I watched Batman grow increasingly grimdark as he relied evermore on his wealth at the expense of his wits. Ironically, this made him more popular than ever with the reading public. Like any jealous lover, I did not appreciate my hero growing away from me. (And yes, I'm aware that my emotional, nostalgic bias for "the Batman I first met" is its own set of problems, but are ex-lovers ever rational?) Which brings us back to Booster. 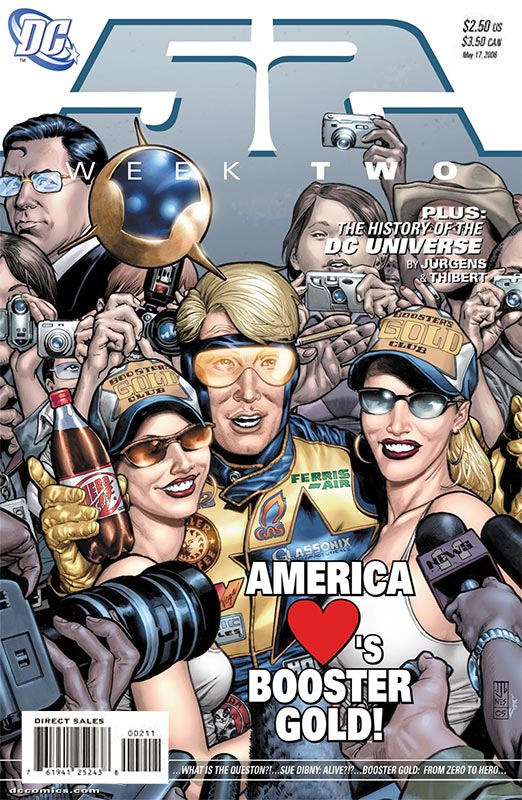 About the time that I decided that Batman and I should just be friends, Booster Gold was returning to the limelight with a tragic turn in Countdown to Infinite Crisis. Despite never being my favorite hero, I'd been following Booster's adventures for years, even through the wasteland of Extreme Justice and the lean years that followed.

Booster's subsequent rise from the ashes in 52 finally made me realize how truly unique he was. I couldn't name another character who had survived such a long journey from origin to the triumph of saving a multiverse. With that realization, Boosterrific.com was born. 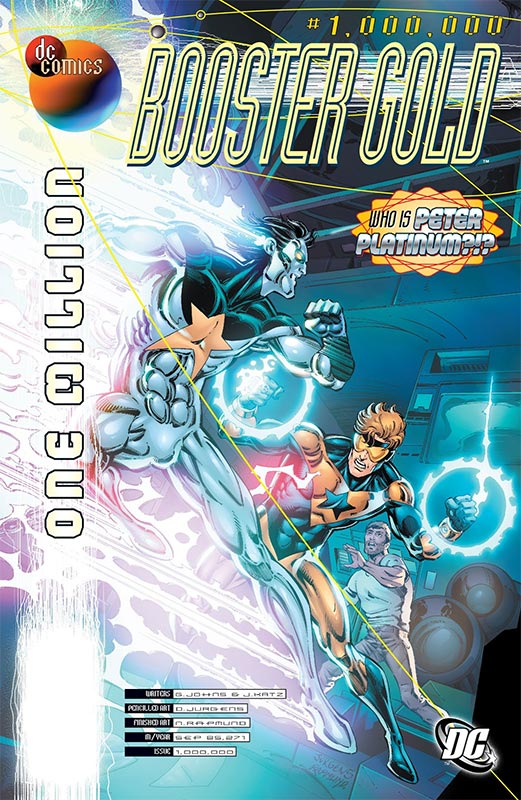 I now gladly call Booster Gold my favorite character, and I'm grateful he was willing to wait for me to come around. I assume that eventually, everyone will eventually realize Michael Jon Carter's greatness. Time has always been on Booster Gold's side.

Stephen Micciola posted on Mar. 1, 2021 at 12:10 AM
I absolutely love this site. Obviously I too have learned to love all things Booster and Skeets. Keep doing what you love. Go team Booster.

Do You Need a Tissue?

Judging by your attachment to Daniel and Michelle, it seems that most of us are attached to Booster and are projecting onto his two most similar cast members, his closest relatives.

Last week's poll question: Which of Booster Gold's supporting cast do you associate with yourself the most? (31 votes)

Most interesting to me is that Rani gets no love at all! This needs exploring further: has DC driven all "innocents" away from comics (or at least Booster Gold comics), or do they just not come here to Boosterrific.com to vote? Or do we all simply disdain the "Mary Sue" character that seemed to have no purpose or resolution? Hmm?

On another down note, it sure looks like Justice League International is being canceled. Not knowing what comes next is a problem for me: I hate the uncertainty. How do you feel about it?

Grimmy posted on May. 17, 2012 at 10:55 AM
Believe it or not, I'm hopeful. As old as I am, I'm not opposed to change, only continuous chaos. Which is the vibe I've been getting from DC lately (last year or so). I don't know if this is the first step in getting Booster back on track, but after this mediocre series, anything (tv series in the works) has got to be better. right? :/

deusex2 posted on May. 17, 2012 at 12:54 PM
Of course you're right! And I completely agree with you, good sir! ANYTHING...well, almost ANYTHING is better than "New 52". Don't get me wrong, it did brought some good titles, but sadly there were too few to justify the sacrifice of countless good titles. Not to mention Booster's own series.

As for the poll, I'd go with relief and terror. I'm glad that DC's twisted abuse of JLI and Booster's personal time is coming to an end(because the series were beginning to go downhill fast with the arrival of Nightwing, and the death of Gavril).

Put Yourself in Their Shoes

There were some great suggestions for other titles in last week's comments, and this poll had a large number of voters. Clearly, we're excited about Booster Gold on TV, whatever SyFy decides to call it.

Last week's poll question: What is the best title for the currently untitled Booster Gold television show produced by the SyFy network? (50 votes)

Last week, I watched children pouring out of a matinee showing of The Avengers, most of them pretending to be one of the film's heroes. How did they chose which hero they would role play? Did they innately associate with one of the characters, or did they prefer the role that they filled on the team? There's only one way to answer this question: make it a Boosterrific Poll question!

Jesster posted on May. 10, 2012 at 5:45 PM
Unfair Question, while I associate myself more with Dirk I would probably prefer to role play as the opposite of what I am and that would be Trixie, who I miss more than the rest of you miss Ted.
Wait a minute! Supporting cast and there's no mention of Skeets? For shame! We all want to be Skeets

Boosterrific [Official Comment] posted on May. 10, 2012 at 6:23 PM
Why else do you think I left Skeets out of this poll? And who said my polls had to be fair?

Grimmy posted on May. 10, 2012 at 6:30 PM
Sidekick Skeets or Mentor Rip Hunter (My personal choice since we share the same beard) are too easy. So, left with the others I'll pick...

Curt posted on May. 10, 2012 at 6:44 PM
Why supporting cast? I wholly identify with future jock turned shamed museum janitor turned superhero artifact thief turned time traveller turned corporate sellout turned glory hound turned hero that no one else has heard of turned leader of the Justice League International! But if I have to pick a supporting cast member...

Morgenstern posted on May. 11, 2012 at 12:14 PM
I am German, have scars, and an Arabic name that translates into Lucifer. There is no way I would not end up being a villain in a comic book world.

Thursday Is the New Friday

This poll wasn't as widely reported as the Iowa Republican caucus, but it was far more important! It seems that character study defeats action/adventure. This must be awards season.

Begin the Year with Booster's Best

While Booster Gold's victory over Maxwell Lord may have been short lived, it certainly seems to have struck a chord with our voters. Let's hope that Booster will get to have a showdown with his old frenemy one day in the DCnU.

Last week's poll question: What was the highlight of 2011 for Booster Gold? (38 votes)

Beginning next week, polls will be moving to Thursdays from their customary Fridays. Adjust your calendars appropriately. Since that means that this week's poll will run for 6 instead of the customary 7 days, let's keep it simple: this is the Best Booster Book Championship!