Another Comic Con has come and gone. So what, if anything, did we learn about Booster Gold this year? Not much.

1. Booster Gold might be in the DC Films intro.

When DC Films debuted their new intro in front of Wonder Woman this June, there was some debate about which DC characters it contained.

At Comic-Con, DC gave attendees of the DC Films panel a better look. (You'll see that the placement of characters in the film intro above is not identical to the characters seen on the panel wall below, but the individual character models appear identical.)

I can't be sure whether Booster Gold was included in the original, but he was certainly present at Comic Con — in his pre-New 52 outfit, no less! (Thanks to jeremy r! hudson for bringing this to my attention.)

It was announced in 2016 that SyFy had picked up Krypton, a television show based on Superman's home planet (before it exploded, of course). The show, set to debut in 2018, took the spotlight on Saturday, where it got its own panel at Comic Con. During that panel, we learned that though it won't share continuity with shows on the CW or the big screen, it will feature some significant cameos from DC properties.

Said Geoff Johns at the panel (according to Laura Hurley of CinemaBlend.com):

Doomsday will be in the show... In the pilot, and I'm spoiling things. 'I'm from a planet called Earth. My name is Adam Strange.' We will bring in others. Booster Gold. I never say never. Hawkwoman is also there, and as the show progresses, we'll bring in more.

That's not a promise that we'll see Booster Gold, but it sounds likely, especially since the show is no longer set purely in the past but in the present as well. You can't have a show set in the DC Universe with time travel elements without at least some reference to Booster Gold, right? (*He says, glaring at Legends of Tomorrow.*)

Speaking of Geoff Johns, he had a panel all his own. Madeline Ricchiuto of Bleeding Cool reports that Johns claims industry insiders discouraged many of his planned DC Comics projects, including Booster Gold.

Despite the fact that he was constantly told "you may want to reconsider," some of his choices like writing a book about Booster Gold, but he said Didio's support always pushed him forward.

I've always been pretty vocal about my dissatisfaction with the direction of storytelling and universe building (usually more like universe decapitation, rape, or murder) in the Didio era. However, I have to admit that his reign at DC has given us some of the higher points in Booster Gold's career. He deserves some credit for that. So thanks, Dan.

Now give me my Booster Gold back!

CelebrenIthil posted on Jul. 24, 2017 at 5:36 PM
All Aboard the Hype Booster-Themed-Dash-the-Tank-Engine-Specialty-Figurine!

CelebrenIthil posted on Jul. 25, 2017 at 5:36 PM
(Oh hey! Have you just changed the website's adress bar colour in mobile browsers? I don't remember things being quite that golden before...)

Boosterrific [Official Comment] posted on Jul. 25, 2017 at 10:41 PM
Yes, I did. I was browsing some other sites on my phone and saw they were doing it, so I updated my code. So far, it's only on the mobile page (as desktop browsers don't support it).

The Blot's Sketchbook from ComicCon 2016

The Blot has finally decompressed from his trip to San Diego Comic Con 2016 and is sharing with us the latest additions to his Booster Gold sketchbook: 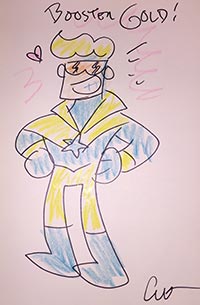 From left to right, that's the work of Cully Hamner, Art Baltazar, and Josh Howard. You can see every piece in The Blot Says' Booster Gold Sketchbook on Flickr.com.

I can't wait to see what you get next, Blot! Thanks for sharing.

I Don't Know If You're Meant to Read into It

Comic fans love a good Easter egg. There has been a lot of speculation why Rip Hunter's real name was revealed to be "Michael" on DC's Legends of Tomorrow. Is that a Booster Gold reference? Inquiring minds want to know!

Fast forward to the 2:48 mark in the video below to hear Andy Behbackht of TVOVermind.com put that question to Darvill himself at Comic Con.

Darvill's reaction to the question reminds me of William Shatner's response to the question "What was the combination?" on a rather in famous Saturday Night Live skit. That's what Comic Con is all about. Gotta love it. 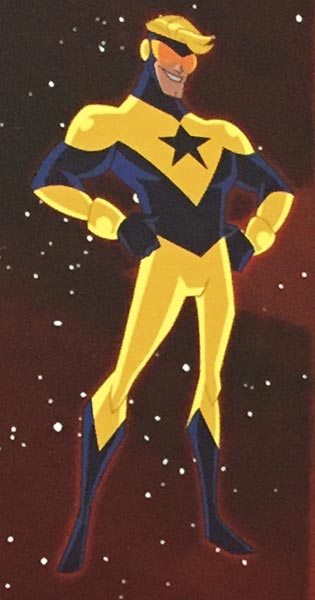