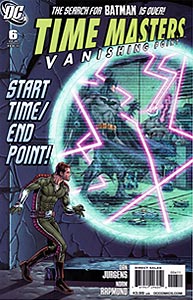 Issue Notes: Tie-in to Batman: The Return of Bruce Wayne and lead-in to Flashpoint. Final issues of this mini-series.

Issue Reprints: This mini-series has been collected in Time Masters: Vanishing Point.

Page 4, panel 1
Green Lantern, Skeets, Superman, Booster Gold and Rip Hunter face off against Professor Zoom in the inhospitable environment somewhere inside time itself. Professor Zoom and Skeets are both aware that both Booster and Zoom are from the 25th Century. Booster himself seems unaware of this shared heritage between hero and villain.

Page 4, panel 2
Superman must have forgotten his meeting with Booster and Skeets in Booster Gold, Volume 1, #6, in which he called Booster "a 25th century crook" after learning that Booster stole his original equipment.

Page 14, panel 3
A PAIR OF DOCS?: Booster Gold, Green Lantern, Rip Hunter, Skeets, and Superman trace the Black Beetle to Waverider's Grave. Booster Gold is concerned about the well-being of Supernova, who has just been soundly beaten by the Black Beetle. Superman notes that Booster Gold was temporarily disguised as Supernova during the events of 52, though Rip Hunter calls this Supernova "Daniel," Booster's ancestor and the man who inherited the Supernova costume from Booster.

Page 15, panel 3
SPOILER WARNING!: Skeets fittingly introduces the Time Masters to Waverider's successor, the Linear Woman, formerly Liri Lee. Both Skeets and Linear Woman wear a skin comprised of the corpse of Waverider, the remainder of which lies disquietingly on the ground behind them. (Waverider was killed during the events of the series 52). Reveal

Page 17, panel 4
ALTERNATE REALITY: Using Supernova's powersuit, Rip Hunter is able to transport the New Time Masters to an alternate Vanishing Point, one that was not destroyed by a hyperfauna during the events of Batman: The Return of Bruce Wayne #6.

Page 18, panel 2
The events seen in the monitor were originally presented in Final Crisis #6.

Page 18, panel 3
The events seen in the monitor were originally presented in various issues of Batman: The Return of Bruce Wayne.

Page 19, panel 2
Booster Gold is seen with Wonder Woman and Batman in this one-panel allusion to the events of Batman: The Return of Bruce Wayne #6.

Page 22, panel 1
SCHOOL'S IN: Someone other than Rip Hunter has been writing on his chalkboard, which is now full of teasers for the upcoming Flashpoint mini-series.

Boosterrific Review: I did not enjoy this series much at all until I went back and read its individual plot threads (Rip Hunter, Booster Gold, Supernova) in chronological order rather than publishing order. What initially appeared to me to be a jumbled mass of anti-complementary tales became far, far more satisfying. Yes, this series leaves more questions than it answers as it leaves one confusing time-travel mess (Batman: The Return of Bruce Wayne) and prepares for another (Flashpoint). (Why was Professor Zoom even in this series? Or for that matter the Time Stealers, or Black Beetle? Will there be another story filling in the gaps in what happened in this issue?) But in the end, I have to conclude that the rough journey through the previous six issues was ultimate worth the trip.

(3 votes)
Erin (Feb. 22, 2011, 15:25:55)
Yes a lot of plots were jammed into this series, and yeah TROBW and Flashpoint weren't major parts of this. Still I enjoyed this series. We got some great flashbacks to Rips' childhood, great POV from Rip, more Black Beetle and the Linear Men. And while I saw the twist with Supernova coming I was truly caught off guard by other things. Looking forward to Jurgens' return to BG.
Lazlo (Feb. 15, 2011, 18:50:19)
Regarding the mother, Trixie Collins (a blond) wore the same suit Michelle is wearing right now (the Goldstar suit), for one issue (#13) and she actually saved the day! Do we need more clues? [Trixie Collins was indeed the original Goldstar, but she was a redhead, not a blonde. -- Boosteriffic]
Harry (Feb. 7, 2011, 12:42:10)
I enjoyed this series all six issues and look forward to continuing it in Flashpoint and BG #44.