Brief Synopsis: Planning an assault on Warworld, Superman secures the aid of Lexcorp and Professor Hamilton before recruiting Deathstroke to lead the force, then Wonder Woman and Aquaman who convince him to gather more.

Issue Notes: "Panic in the Sky! Second Strike." (Superman diamond chronology "1992:10.") The title of this storyline, "Panic in the Sky," is based on an episode of the 1950s Adventures of Superman television show. Dan Jurgens is the author of this issue, and it is little surprise that he would include his creation Booster Gold in the heroes assembled. 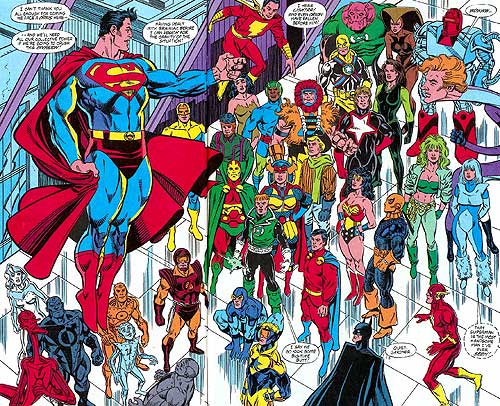 Page 20, panel 3
Booster comments to Beetle that the assembled crowd makes it feel as though "the JLA had never been disbanded!" The United Nations revoked the charter of the Justice League in Justice League Europe #31. Long before that happened, however, Booster had quit the Justice League to lead the Conglomerate.

Page 22, panel 2
Booster is presumably still in the assembly (but off-panel) when Brainiac's Headship starship returns to Metropolis with a captured and disabled Aquaman.

Boosterrific Review: Despite being promoted as "Second Strike" in the "Panic in the Sky!" story, this issue reads as though it were an extended prologue. The issue does little to advance the story of Brainiac's invasion of Earth, but it deserves credit for building anticipation for the story as Superman assembles his army of familiar faces.