“It All Comes Down to This!” 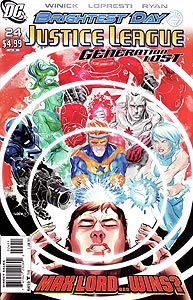 Cover Description: There are two covers to this issue, and both include Booster Gold. Booster Gold and the JLI attack Maxwell Lord in the standard cover by Dustin Nguyen. Kevin Maguire pays homage to his own cover to Justice League #1 (with a cover blurb reference to the surprise twist in the companion Brightest Day series) on the 1:10 variant edition.

Brief Synopsis: Is this the final battle between the Justice League International and Maxwell Lord?

Page 1, panel 4
The first page of this issue attempts to summarize the events of the previous 23 and explain who or what OMAC Prime is through a series of flashbacks. Booster Gold is seen fighting Velcoro of the Creature Commandos, as originally seen in issue #16.

Page 7, panel 1
This issue picks up almost immediately where the last issue leaves off, with Booster Gold confronting Maxwell Lord on board the Checkmate Ship "30,000 feet" above Los Angeles, California, while the rest of the new Justice League International fights OMAC Prime in the streets of the city below. Thirty-thousand feet puts the Checkmate ship in the range of low-flying commercial airliners. Maxwell Lord probably doesn't care (he's killed thousands), but given what Booster Gold has done to the Checkmate Ship, it probably wouldn't survive an impact with an airplane.

Page 16, panel 4
POWER DOWN: Booster's powers have been negated by Maxwell Lord's targeted electromagnetic pulse, exactly as happened in issue #1. Somehow, Lord has damaged Booster's future-tech power suit, indicating that the suit is only damage-resistant when it is powered.

Page 16, panel 5
This is the second time that Booster has hit Lord this issue with no powers and generated a "crack" sound effect. Are those Lord's bones breaking, or Booster's knuckles cracking? Whether a colorist or letterer error, this all-black "crack" is pretty hard to read; this is one of two sound effect printing errors in the issue.

Page 17, panel 2
Um, is this "crack" Booster's back? And is "crack" the only sound effect available for fistfights?

Page 29, panel 1
Just when Booster thinks he has Lord where he wants him, Lord uses his mind control to ensure his escape. Poor, hard-luck Booster. Fortunately, he has friends like Captain Atom...

Page 34, panel 1
... and his other Justice League International teammates, Power Girl, Batman, Ice, Fire, Wonder Woman, Rocket Red, and Blue Beetle. Skeets does appear in this issue mainly as an advisor to Blue Beelte, but never on panel with Booster Gold.

Page 37, panel 2
Booster Gold and Batman discuss the final actions of Maxwell Lord in the Batcave in Gotham City. While Professor Ivo is mentioned, he does not actually appear in this issue other than in flashback on the first page.

Boosterrific Review: A great conclusion to a great story. Yes, there are a lot of little flaws with the series (uneven art, pacing problems, unnecessary origin retcons, pointless battles), but when all is said and done, this was a very enjoyable super hero adventure.