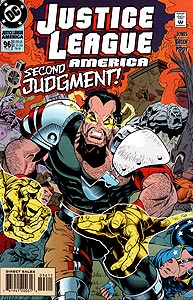 Brief Synopsis: Maxwell Lord's funeral is interrupted by an attack from the villain Judgment.

Page 5, panel 5
While Booster is pleased to see so many powerful figures (both physically and politically) in the crowd, Martian Manhunter remains concerned that something seems amiss about the mourners gathered for Lord's funeral service. Manhunter, who Lord once listed among his closest friends, suspects that Lord has secrets that will emerge from beyond the grave.

Page 12, panel 5
The heroes' battle with Judgment endangers the lives of the surrounding crowd. Since Booster is not shown in combat with Judgment, it can be assumed that he is busy aiding the bystanders. Not only is this a necessary action to preserve innocent life, Booster couldn't turn down the opportunity to hobnob with the country's elite.

Boosterrific Review: The inevitable fight breaks out at the second Justice Leaguer's funeral in 6 months. The reasons for this are never made entirely clear, but explanations have not been frequent or coherent in recent Justice League issues, so it's probably fruitless to start asking expecting them now.