“The Brave and the Crazy” 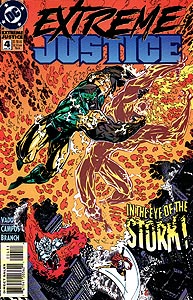 Cover Description: Amazing Man grapples Ronnie Raymond in the sky above Pittsburgh while Captain Atom and Maxima race to his assistance. (No Booster Gold.)

Issue Summary: In their Mount Thunder headquarters, Blue Beetle and Amazing Man study Amazing Man's new powers. Captain Atom and Maxima have a lovers quarrel that soon spills over and interrupts the training session. Maxima creates her own stronghold from the scrap of their previous battles in the mountain.

The dispute is interrupted when Booster Gold catches a news broadcast showing Firestorm rampaging through Pittsburgh. Searching for some way to transport the team across the country, the team finds a fleet of Kord Industry Bugs.

In Pittsburgh, Oberon is trying to inform the city authorities about the danger Firestorm represents when the Extreme Justice team (minus Maxima) arrives. Skeets informs Booster Gold about how Firestorm has gone out of control.

Captain Atom immediately attacks Firestorm, but Blue Beetle has a plan. Amazing Man absorbs and drains Firestorm's excess energy. At this moment, Ronald Raymond is contacted by Professor Stein and told that the elemental Firestorm is returning to Earth.

Page 6, panel 4
Booster Gold arrives in the Brain of Mount Thunder at the tail end of a romantic spat between Captain Atom and Maxima.

Page 11, panel 1
While channel surfing "looking for the Playboy Channel," Booster has discovered a news broadcast on CNN of Ronnie Raymond rampaging through Pittsburgh. Booster recognizes Raymond as Firestorm. Both Booster and Firestorm betrayed Earth's heroes and sided with the Manhunters during the events of Millennium.

Page 13, panel 1
Booster discovers that Mount Thunder's hanger houses a Kord Industries-produced commercial version of Blue Beetle's Bug. This is the third version of Beetle's Bug, and the first indication that the Bug was mass-produced and sold to the public. How many Bugs are out there?

Page 15, panel 4
Amazing Man II, Blue Beetle II, Booster, and Atom arrive in Pittsburgh to find Oberon, long-time Justice League staffer left behind when the League fractured into three teams. The names shown on street signs and license plates in this panel are the first names of several artists and editors working on the book.

Page 21, panel 1
Following Amazing Man's successful siphoning off of Ronnie Raymond's excess power, Booster joyfully comments that "they didn't put that 'A' on his chest for nothing!"

Page 24
POWER UP: Ruben Diaz's letter column response to a letter by Shawn Baston indicates that Booster's new armor, version 2.0, still includes an energy-absorbing field presumably similar to his original, rarely used Mass Dispersal Field. The armor also is indicated to have a limited battery life. Diaz suggests that the armor has more power, both in regards of mechanical operation and force field repulsion than his previous power suit, dismissively referred to as "a pair of tights." No indication is provided regarding the purpose of Booster's new utility belt.

Boosterrific Review: It is a rare feat when a series is improved by the inclusion of a temporary fill-in artist, but that is exactly what happens when regular artist Marc Campos is temporarily replaced by Mozart Cuoto for this issue. While Cuoto's work is best described as bland, bland is a pleasant departure from Campos' typical work.