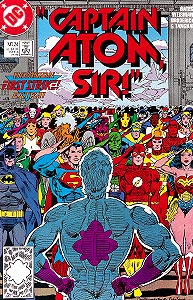 Brief Synopsis: Captain Atom undertakes a dangerous space mission against the alien alliance despite reservations by the Earth leaders.

Issue Notes: The events in this story take place after Justice League International #22, as indicated by the assembled crowd of heroes on the last panel. 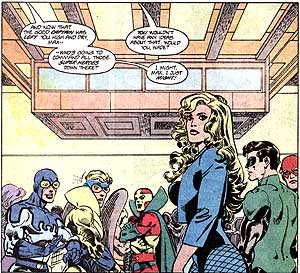 Page 22, panel 4
Booster Gold appears with other Justice Leaguers assembled in "The Womb," America's military headquarters for the war against the invading aliens. Blue Beetle II, Booster Gold, Mister Miracle, Green Lantern II, and the Flash III are all staring at Black Canary II. This is Canary's first interaction with the Justice League since she withdrew from active duty in Justice League International #19. This is the first time that Booster has seen her in her classic fishnet costume. This panel closely precedes the briefing shown in Invasion! Book Two.

Boosterrific Review: Unlike the typical ancillary crossover tie-ins, this issue is very closely tied to the events of the Invasion mini-series despite its throw-away story. Useful for fans of the character or completists, but not exactly a must-read comic book.