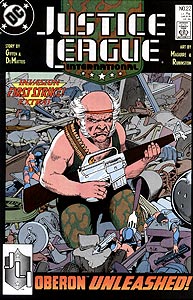 Cover Description: Oberon, dressed as Rambo from the 1985 movie Rambo: First Blood Part II, stands in the ruins of a JLI Embassy surrounded by the bodies of several miniature aliens. (No Booster Gold.)

Brief Synopsis: With most of the League combating the alien invasion, Oberon combats an invasion force of miniaturized aliens in the New York JLI Embassy.

Page 2, panel 6
Booster has been left behind on monitor duty while his teammates were dispatched to the South Pacific to engage the alien invasion force. Booster is grossly disappointed at being left behind, after all, he has combated an alien invasion before in the pages of Booster Gold, Vol. 1, #21 & #22. Oberon consoles him with Oreo cookies, a favorite of the Martian Manhunter.

Page 3, panel 4
Oberon repeatedly beats Booster at checkers. Booster's defense is that he is more accustomed to the version of the game popular in his native 25th century: "three-dimensional checkers." This is an allusion to the 3D chess game seen in several episodes of the 1960s television show Star Trek. The events of that show took place in the 23rd century, 200 years prior to the birth of Booster Gold.

Page 5, panel 1
Expecting faulty wiring to be the cause of the JLI teleporter activation, Booster is caught off-guard and subdued by an invasion force of 6-inch tall Khund aliens.

Page 7, panel 7
Oberon believes that Booster may be dead. This is the third time in Booster's career that his allies have feared the absolute worst about Booster's mortality.

Page 10, panel 2
After Oberon has subdued the invaders, he revives Booster. Rather than thank Oberon, Booster laments that he was defeated so easily. That's gratitude for you.

Boosterrific Review: This tie-in issue to the Invasion! crossover event is really two stories in one as the Justice League splits forces to deal with an alien invasion of Earth. While the entire issue is presented with the traditional JLI blend of action and humor, the first half is more of a one-note punchline as midget Oberon has to save the JLI headquarters from shrunken invaders. Fortunately, this issue avoids the weakness of so many crossover tie-ins and can be enjoyed without any knowledge of the events of the Invasion! series.