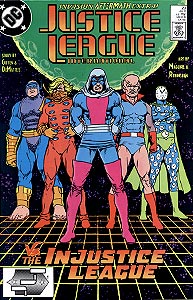 Cover Description: The Injustice League, (from left to right) Big Sir, Cluemaster, Major Disaster, Multi-Man, and Clock King, stand on a grid in space with a green planet hanging in the sky behind them. (No Booster Gold.)

Brief Synopsis: The newly formed Injustice League attempt to steal an alien spacecraft is jeopardized by the Justice League, who coincidentally happens to be in the area.

Page 1, panel 1
Booster joins his fellow Justice Leaguers Blue Beetle, Fire, Guy Gardner, Ice, Martian Manhunter, Mister Miracle, and Rocket Red on an island in the South Pacific Ocean, where they are attempting to dispose of a crashed alien spacecraft. Booster seems to spend most of his time watching the others work.

Page 5, panel 4
FIRST APPEARANCE: Appearance of Major Disaster and Bruce. Major Disaster was a petty crook who stumbled into the secrets of Green Lantern and Flash and used that knowledge to make himself a villain capable of causing natural disasters at will. Disaster has a history of hiring technically-minded henchmen such as Bruce, though this is Bruce's first appearance.

Page 5, panel 8
Appearance of the Clock King, a villain who ran afoul of Green Arrow. Clock King uses his knowledge of clocks to aid his robbery schemes.

Page 6, panel 1
Appearance of Multi-Man, a villain with the unusual ability to reincarnate himself with new and unique super-powers each time he dies. For years, he was a thorn in the side of the Challengers of the Unknown.

Page 6, panel 2
Appearance of Big Sir. Big Sir suffers from a genetic anomaly of the pituitary gland, and as a result has a huge body but suffers a retarded mental state. He was once tricked into combat with the Flash. Multi-Man's question about Big Sir's genius is a reference to Big Sir's temporarily heightened intelligence granted by the inhabitants of Gorilla City, home of Flash's enemy Gorilla Grodd, in issues of Flash, Vol. 1.

Page 7, panel 1
Appearance of the Cluemaster, a former foe of the Batman. Cluemaster is in many ways similar to the Riddler, though Cluemaster enjoys combat and always keeps a variety of devices on hand to use on his opponents.

Page 8, panel 2
While Beetle is irritated about being on a deserted island, Booster enjoys the vacation. Perhaps his experiences here are the true inspiration for Beetle and Booster to start their own resort in Justice League America #34.

Page 22, panel 1
When the Dominators detonate the Gene Bomb (in the pages of the Invasion! mini-series), Booster is standing on the shore of a deserted island in the South Pacific Ocean, alongside Beetle, Fire, Martian Manhunter, and Rocket Red #4.

Boosterrific Review: Elsewhere in the DC universe, a massive alien invasion is being fought. However, no one would ever know from this tangential tie-in issue. Instead of fighting an alien armada, the Justice League, traditionally the forefront team of Earth's most powerful defenders, is battling a small band of third-rate Earth villains in a confrontation that is more Keystone Kops than the expected Independence Day. If you can overcome the fact that this issue is proof of the declining roster of a once-powerhouse franchise, you'll find yourself laughing at a nonstop barrage of jokes.