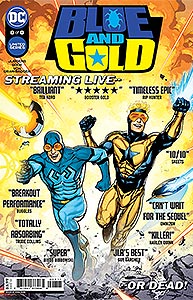 Cover Description: Blue Beetle and Buggles and Booster Gold and Skeets charge forward in a parody of an action-movie poster, complete with endorsing pull quotes.

Brief Synopsis: Booster Gold and Blue Beetle are ambushed by Black Beetle, who finally gives up the secret of his real identity.

Issue Summary: Despite successfully defeating the Rainbow Raider and recovering $860 million in stolen art, Blue and Gold Restoration is nearly out of funds. While considering their options, Blue Beetle and Booster Gold are ambushed by Buggles, who has come under the control of Black Beetle.

Booster uses his Time Sphere to take the team into the past where Black Beetle is finally taunted into revealing his true identity. Together, Booster and Beetle defeat the Black Beetle, who escapes into the timestream.

Back in the present day, Theresa Collins is informing the heroes that they are broke and will have to shut their business down when the meeting is interrupted by Batman. Batman offers them a gift from his friend Bruce Wayne: $20 million to keep Blue and Gold Restoration afloat.

Issue Notes: This is the final issue of the 8-issue Blue and Gold mini-series.

Page 2, panel 1
Art in the Rainbow Raider's secret stash include works in the styles of Leonardo da Vinci, Salvador Dali, Keith Haring, Wassily Kandinsky, Gustav Klimt, Roy Lichtenstein, Henri Matisse, Georgia O’Keefe, Pablo Picasso, Jackson Pollack, Vincent van Gogh, Rembrandt van Rijn, Johannes Vermeer, Andy Warhol, and James McNeill Whistler (among others). Interestingly, the pieces appear to have come from many different museums across the globe, and, fittingly for the Rainbow Raider, many of them have colors in their titles (Cow's Skull: Red, White, and Blue, Blue and Green Music, Blue Nude, Olive Trees with Yellow Sky and Sun). Considering that the art includes such famous pieces as Guernica, The Persistence of Memory, and Mona Lisa, $860 million may be a conservative estimate.

Page 4, panel 1
Terri Collins breaks the bad news that Blue & Gold Restoration continues to be badly in need of new funding despite such successes as...

Page 4, panel 3
...finding and revealing Bigfoot to the world. Perhaps the reason that the public was indifferent to the revelation of a captured Bigfoot is because they are common enough in the DC Universe that there is already a public Sasquatch Detective (see 2018's Sasquatch Detective #1 for more details).

Page 4, panel 4
They also proved the Loch Ness Monster was an alien species. Alien animals were a very common sight in the DCU's Silver Age.

Page 5, panel 1
Booster calls Skeets "dude" for the first time. Skeets doesn't like it, so this may also be the last time.

Page 6, panel 4
Buggles unexpectedly teleports Blue Beetle, Booster Gold, and Skeets (and the Blue Buggy) to the Badlands of western South Dakota. This is Booster's first trip to the region.

Page 7, panel 4
POWER UP: A single Booster Shot ("set to stun") incapacitates Buggles, who had been corrupted by...

Page 11, panel 6
Black Beetle reveals that his master plan was 1) kidnap Jaime Reyes and infect his armor with malware, 2) release Nullifex in New York City to draw the attention of Booster Gold and Ted Kord, 3) allow Reyes to escape and aid Blue and Gold, spreading the malware to Buggles, 4) have Buggles teleport Booster and Ted into an ambush, and 5) steal Skeets to have access to the secrets of history. The first four steps of that plan are unnecessary, since Blue and Gold regularly broadcast their location to the general public, and Black Beetle already had the technology available to disable Buggles at any time. Not to mention that as a time traveler who already had access to Rip Hunter's lab (as seen in Booster Gold #5) and Vanishing Point (Time Masters: Vanishing Point #2) could ambush Skeets unguarded at any time he desired. So why bring the heroes to the Badlands? What was gained in the sacrifice of Nullifex (Blue and Gold #7)?

Page 12, panel 4
Booster summons Rip Hunter's Time Sphere to teleport everyone into prehistoric South Dakota, when the Badlands were a lush landscape teeming with life.

Page 13, panel 5
Blue Beetle's sonic BB Gun breaks Black Beetle's helmet, revealing him to be none other than...

Page 14, panel 1
SPOILER WARNING!: ..."Mike" Carter of Earth-3, where all the familiar DCU heroes are villains (and vice versa)! Previous clues pointing to this reveal include the facts that Black Beetle has his own Time Sphere (Booster Gold #6), the Linear Men did not know of his existence (Time Masters: Vanishing Point #5), and Skeets had previously scanned him and judged the information revealed to be "impossible" (Booster Gold #25). Reveal

Page 15, panel 3
Beetle shouldn't be too worried. He and Booster previously defeated an alternate reality "evil" version of Booster in JLA Classified #8 (2005).

Page 15, panel 4
HIS STORY: Just as Michael Jon Carter of 25th-century Earth-0 was inspired to return to the 20th century by stories of the Justice League of America, Mike Carter of 25th-century Earth-3 was inspired by stories of the Crime Syndicate of America. The concept of an evil alternate Earth-3 was first revealed in Justice League of America #29 (1964). Though that universe was destroyed in the Crisis on Infinite Earths, Booster Gold met inhabitants of the post-Crisis incarnation of Earth-3 in Justice League Quarterly #8 (1992). The contemporary Earth-3 debuted in JLA: Earth-2 (2000) and crossover events between the Earths have brought them more and more often into conflict with the heroes of Earth-0.

Page 16, panel 1
Ted Kord brings a triceratops to a knife fight. Fossil records indicate that Triceratops were common in the Badlands region in the Late Cretaceous period.

Page 17, panel 7
Ted Kord suggests that Black Beetle should have been called "Booster Black" or "Dark Booster," but there's no indication that Mike Carter ever had the nickname "Booster" in the 25th-century he came from. In Booster Gold #7, Supernova calls Black Beetle "Joshua" as they discuss Booster Gold; it remains unclear whether that is Mike's actual middle name or whether Supernova was even aware of Black Beetle's real identity. (Coincidentally, while we're on the subject, it's worth remembering that after receiving a "Batmanish" makeover from Bat-Mite (in Bat-Mite #4), Booster temporarily adopted the moniker of "Black Gold," which would also work as a name for Black Beetle.)

Page 18, panel 4
The original quote that Blue Beetle paraphrases here is "Uneasy is the head that wears the crown," from William Shakespeare's Henry VI, Part 2.

Page 18, panel 5
The tyrannosaurus dinosaur that Ted wants to see (but is never pictured on panel) has become something of a recurring joke ever since one was first seen in the tease of future Booster Gold adventures at the conclusion of Booster Gold Volume 2 #1 (2007). Booster finally came face-to-face with a living T. Rex in Time Masters: Vanishing Point #1 (2010).

Page 19, panel 3
Back in present day New York City, Booster Gold mentions that Blue and Gold Restoration did successfully "transplant the brain of Quazzo into that guy from Dimension X," a request first made of them in issue #5.

Page 19, panel 4
Blue and Gold decide that in the face of their financial woes, Blue and Gold Restoration will have to be shut down...

Page 21, panel 4
SPOILER WARNING!: ...until Batman appears and gives them a $20 million donation from Bruce Wayne. Booster and presumably Beetle know Batman's secret identify, but Terri Collins clearly does not. (An editorial caption explains that this story "takes place before Bruce Wayne lost his fortune," which was confirmed in Batman #101, released in Late December 2020. That implies that the entire Blue and Gold series takes place prior to the conclusion of the "Joker War" event.) Reveal

Boosterrific Review: This book isn't perfect — previous issues haven't quite prepared for this ending, the plot has some large question marks, and some of the art especially towards the end appears rushed — but it makes a very happy ending for a series that certainly deserved more issues.