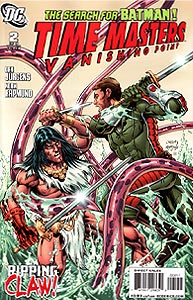 Cover Description: Rip Hunter spars with Claw amidst tentacles. (No Booster Gold.) This is the second Booster Gold comic book in a month to feature tentacles on the cover (see Booster Gold Vol. 2, #35).

Brief Synopsis: The Time Masters find themselves lost in time as a war rages across Pytharia.

Issue Reprints: This mini-series has been collected in Time Masters: Vanishing Point.

Page 3, panel 1
It's no wonder Rip Hunter doesn't recognize his location: he is in the otherworldly realm of Pytharia face to face with Claw the Unconquered, protagonist of his own short-lived fantasy title in 1975. Claw has been largely absent from DC comic books since his series was cancelled. According to Justice League: Cry for Justice #6, Claw's adventures took place in the 140th century BC.

Page 7, panel 2
Black Beetle (who now wears red after stealing the Red Scarab in Booster Gold, Volume 2, #24) reveals the exact point in chronology for each of the Time Stealers. This explains apparent inconsistencies in the appearance and motivation of the Time Stealers compared to other recent appearances in the DC Universe.

Page 8, panel 2
Booster Gold, Green Lantern, and Superman unexpectedly find themselves in the midst of some sort of military battle on an unfamiliar alien world. 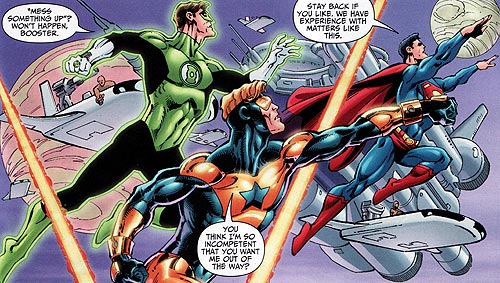 Page 11, panel 2
These two sepia-toned panels are a much abridged version of the conversation between Booster and Rip Hunter as seen in Booster Gold Volume 2, #1.

Page 12, panel 4
Booster Gold intercepts a yellow laser intended for Green Lantern. In years previous, the rings of the Green Lantern Corps had a famous vulnerability to the color yellow. That vulnerability has been much reduced in recent years, but Booster is no less heroic for his attempt to defend Green Lantern from a surprise attack.

Page 14, panel 1
Booster Gold, meet Starfire, a slave turned rebel leader in ancient Pytharia. Like Claw, Starfire was the star of her own short-lived fantasy title in 1976, and has been largely absent from the DC Universe in the years since. Both Claw and Starfire were the creations of writer David Michelinie.

Page 21, panel 4
"I should have my copyright guy give you a call." Booster slyly comments on the fact that DC Comics has three active characters who share the name Starfire. The most famous is K'oriandr, a former member of the Teen Titans. The first Starfire, also a former member of the Titans, has since changed his name to Red Star. (Booster should also probably have his copyright lawyer look into who is the latest person masquerading as Supernova while he's at it.)

Boosterrific Review: This issue is much superior to the previous issue. This is largely in thanks to the fact that it is further divorced from Batman: The Return of Bruce Wayne. Because Dan Jurgens no longer needs to connect so strongly to Grant Morrison's miniseries, he's able to tell his type of story. (The writing style of the two men are about as different as Claw and Green Lantern: you shouldn't expect to see the two in the same story.) And this is very much a Dan Jurgens story, as time travel mishap provides the excuse to tie together widely disparate parts of DC Universe tapestry into a classic Jurgens' action-packed slugfest. If you like Dan Jurgens, you'll love this issue.

(4 votes)
BoosterPowershot (Oct. 21, 2010, 11:01:35)
Better than the first, and I'm really enjoying these scenes at the beginning showing a fatherly Booster Gold and child Rip. GL does some insulting of Booster Gold, and while that "torment" that Booster must endure is a favorite part of mine about his character, GL better shut his mouth. If it weren't for a retcon, he would still be dead and labeled as a traitorous lunatic. Boosterrific seems VERY convinced that Supernova isn't Daniel Carter. But who could it be? Knowing DC's obsession with Bruce, it'll probably turn out to be him....somehow.
KMD (Sep. 10, 2010, 09:23:54)
This was great. Booster was funny (I loved the line about copyrights) and poignant as the banter with Green Lantern showed. And who knew Daniel Carter had such a good head on his shoulders...wait is that him? A fun issue that offered great insight into Rip and Booster.
Superman (Sep. 1, 2010, 05:54:22)
Understanding! Finally. I've always wondered how getting drowning underwater could take Bruce Wayne to another point in time. It's a good thing I decided to pick up Return of Bruce Wayne in spite of Grant Morrison's dense writing. Great issue, this one.
Erin (Aug. 30, 2010, 19:42:29)
I enjoyed this issue more than last. Jurgens weaves some nice details to the Time Stealers, develops Rip and his relationship with Booster. While this is mainly written in Rips' POV we do see Boosters' struggles with trying to balance his instincts as a superhero with what he knows as a Time Master in training. The best part for me was Jurgens showing how Rip grows into the man he is by learning from Booster, and hearing a bit of Boosters' "voice" in Rips' mannerisms.