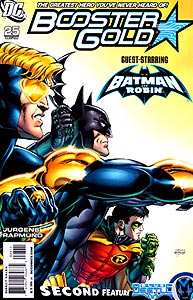 Brief Synopsis: Booster Gold unwittingly finds himself in trouble when trying to recover some important documents from Batman.

Page 4, panel 6
Could it be that Booster Gold has a date with Blair Butler, cover model for Booster Gold, Vol. 2, #23? (Booster always seems to be dating models. What a lucky guy.)

Page 5, panel 5
Rip Hunter is not explicit in his reasoning for demanding that Booster travel back in time immediately, but his point is valid in all of the time travel theories frequently expressed in the DC Universe (detailed here). Despite the fact that Booster currently has the ability to travel back in time to any previous point in history, if time were changed prior to his trip he could conceivably be altered or erased from history and therefore any delay could result in a failure to complete his mission. 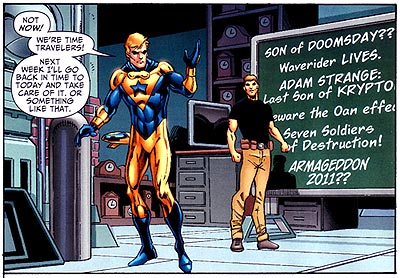 Page 5, panel 6
SCHOOL'S IN: Rip Hunter's blackboard is clearly visible in the background.

Page 8, panel 1
Even though Booster had mentioned Damian casually in the previous issue, Booster Gold has his first official encounter with Robin V.

Page 10, panel 1
A PAIR OF DOCS?: Rip Hunter sent Booster back in time "5 minutes" prior to his previous trip to the Batcave to avoid again encountering Batman III. Clearly this strategy has failed. However, if Batman is here, where is the earlier version of Booster Gold?

Page 17, panel 1
Booster's time travel tourism has taken him to

Booster also says he knows the fate of Ameilia Earhart, but that does not necessarily mean that he was present for her 1937 disappearance over the Pacific Ocean.

Page 19, panel 4
Demonstrating the elastic nature of time in the DC Universe, Booster Gold travels back "15 years" to visit a young Dick Grayson. In real time, 15 years ago Dick Grayson was wearing the mantle of the Batman during the events of the "Prodigal" storyline running through the Batman family of titles (specifically beginning in Batman #512, cover dated November 1994). 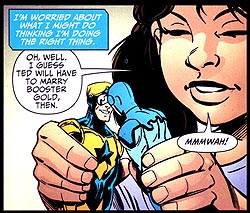 Boosterrific Review: A pleasant surprise following the previous issue. This story leaves the familiarly sappy yet satisfying afterglow of a holiday issue, wherein there is little conflict and not much is resolved, but everyone leaves bettered for having had the experience.