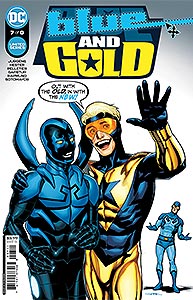 Issue Summary: After a string of early successes, Blue and Gold Restoration is helping the people but making no money. However, when a new villain from the 25th century, Nullifex, goes on a rampage in 20th-century New York City, Booster Gold and Blue Beetle jump back into action. They are soon joined by Blue Beetle III, who thinks that the same person who set Nullifex loose also kidnapped him. Reveal Potential Spoilers

Page 1, panel 2
Enough time has passed between issues that Booster Gold and Blue Beetle have been able to help many needy clients. Most of the people recording these testimonials for Blue and Gold Restoration were seen asking for help in previous issues. Back in Blue and Gold #5, the farmer with a Dimension X problem had a goatee...

Page 1, panel 4
...and the little girl's cat was named Mister Whiskers. Either "Tater Tot" is a nickname, or this little girl has a more than one cat and a yard with too many trees.

Page 4, panel 3
"Who knew that hay was so flammable?" is probably meant as a joke, but someone should explain to a city boy like Booster that barns can actually be quite dangerous. Bailed hay can spontaneously combust under the right conditions, and grain dust can be incredibly explosive in a confined space like a silo.

Page 5, panel 2
The annual property tax rate in New York City for commercial property is greater than 10.69% of the assessed property value, which is itself 45% of the market value. Figuring that the average NYC commercial property sale price over the last two years is $1.3 million, Terri Collins could be on the hook for about $62,000 in annual taxes. Work hard, Booster!

Page 5, panel 3
What Skeets fails to mention is that Booster has attempted this "unethical" behavior himself to disastrous results, as seen in the pages of 52 Week Three.

Page 6, panel 3
As he rushes to confront Nullifex, Booster has Skeets start livestreaming his adventure to his adoring public (and financial supporters), including regulars jdj, radiojoe, she kat, t-grrl, dubba, bill, outliar, zblah, gawd, and...

Page 9, panel 4
...b-bo, who is seen on panel for the first time, revealing that he is Bibbo Bibbowski, Superman's number one fan.

Page 10, panel 1
Booster Gold is saved from Nullifex by a timely intervention from Blue Beetle III, who has freed himself and joined the fight. Pleased to be free, Booster calls Beetle by his first name, Jaime. Be careful with such casual use of a secret identity, Booster! Skeets is livestreaming, remember?

Page 10, panel 3
It depends on how you spell it, Booster. "You can never have enough Beatles" is a reasonably common phrase judging by a quick Google search.

Page 13, panel 2
HIS STORY: Skeets hints that Nullifex might have a connection with the 25th century. Booster and Skeets departed for the past in the year 2462.

Page 15, panel 3
POWER UP: Booster first used his force field to surround and destroy an external object (also at Skeets' direction) in Booster Gold volume 1, #16. He would repeat the trick to have a Manhunter destroy itself in Justice League International #9.

Page 17, panel 5
Ted Kord is quoting a commonly repeated catchphrase from Pinky and the Brain, a mid-1990s cartoon featuring a genius lab mouse (Brain) who plots to take over the world and his idiot assistant (Pinky).

Page 18, panel 3
I know what to say: Those are all horrible names.

Page 20, panel 1
Watching Skeets livestream from a secret location, the evil mastermind figure is finally revealed to the reader...

Page 21, panel 4
SPOILER WARNING!: ...as none other than Black Beetle! Beetle hasn't been seen since the end of Time Masters: Vanishing Point #6 in 2011! Reveal

Boosterrific Review: This issue is almost entirely one long fight that somehow fails to advance the overall plot. It would be a disappointment if not for the delightful interactions between Booster and the Beetles (and their robots, and Terri, and their fans). The tease at the end makes me powerfully eager to see how Jurgens plans to wrap up this series with just one issue remaining.