Blue and Gold on Arrow?

Nicole Drum reports that Arrow showrunner Marc Guggenheim told attendees of this weekend's ACE Comic Con Long Island that Blue Beetle and Booster Gold could be coming to his show.

"I will say, both those characters [Booster Gold and Blue Beetle] are characters we've talked about," Guggenheim said. "Originally Ray Palmer, who was introduced on Arrow, he was supposed to be Ted Kord and we went another way. So, you know, Booster and Blue Beetle, all the 'B' characters really, we're always talking about but nothing I can announce or speak to at the moment."

Hm. That doesn't sound very encouraging to me. However, it's not a "no," so maybe there is still a chance.

Drum goes on to speculate what exactly this comment could mean for the Arrowverse at ComicBook.com.

Kreisberg Out at CW

Though Kreisberg was most recently credited as Executive Producer on CW television shows The Flash, Arrow, Supergirl, and Legends of Tomorrow, fans of Booster Gold most likely know him as the writer of the Justice League Unlimited episode "The Greatest Story Never Told." Kreisberg was also attached to an attempt to sell a Booster Gold television show to Syfy in 2011. He has long been an avid promoter of our hero.

I had expressed disappointment last year when Greg Berlanti announced that Zack Stentz, not Kreisberg, would be the writer working on the latest attempt to get a Booster Gold movie off the ground. However, given the recent events, perhaps that was for the best. At least Kreisberg's ouster shouldn't harm Berlanti's prospects of getting its Booster Gold movie made.

For the Independence Day holiday this year, let's celebrate this classy redesign of Blue Beetle and Booster Gold by Julalesss on DeviantArt.com. 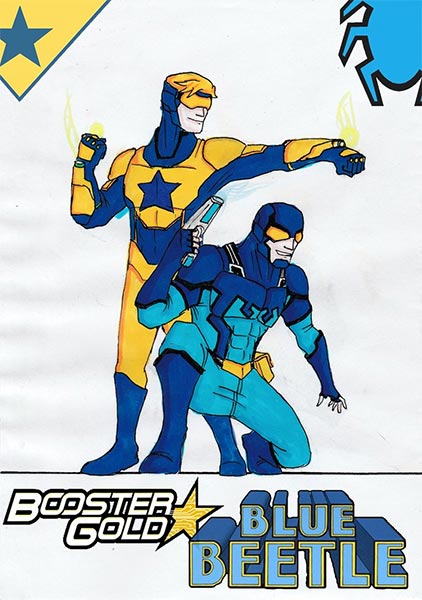 I think they both look like something we might see on the CW, and I'm okay with that. At least there we can be sure that Booster won't be wearing his New 52 redesign. (No, I'm never going to stop beating that dead horse.)

Brady Kj posted on Jul. 10, 2017 at 1:49 AM
Ooh. These do look classy, and only subtly different from the original costumes. Thumbs up to Julalesss!

Greatest Story Never Told Is Better Than Most

Well, of course it did. It's "The Greatest Story Never Told."

It’s a touching moment for Booster Gold, one that makes the audience feel for the character and his plight while adding layers of depth to the hero who doesn’t get many opportunities to do good.

"The Greatest Story Never Told" first aired in 2004. Twelve years before that, people couldn't watch what had been on television twelve hours earlier if they hadn't had the foresight to record it on a magnetic tape!

It's comforting to know that people will still be discovering both the adventures of Booster Gold long after comics are no longer printed on trees. (Maybe even into the 25th century.)

Designer Shane Glines has been posting his character designs for Justice League Action to his Facebook account. He posted these "rough" and "final" versions of Booster Gold back in December. 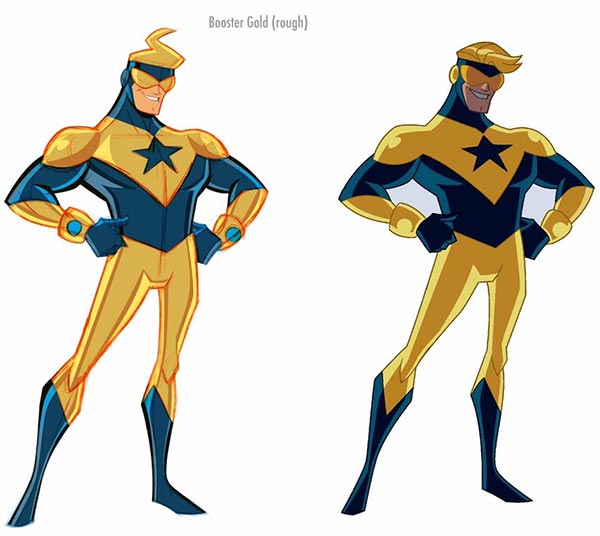 Sharp eyed Booster boosters might recognize that the final design is the exact same image as spotted at Comic Con last year.

I love the hair on the rough, though the final does look more like his comic book self (except for the gold earpieces). So long as it's not the New 52 costume, I'm satisfied.

Is everyone enjoying Justice League Action?

Brady Kj posted on Jan. 10, 2017 at 1:29 AM
Yep! I'm eager to see the next episode. And I agree with you that the rough had nice hair, but Shane Glines made the right decision in the end.