Clap Your Hands If You Believe

The big news this weekend, at least so far as Booster Gold and the Justice League International are concerned, has been the buzz about a sketch appearing on artist R.B. Silva's Instagram page that shows Booster Gold alongside several other high profile characters. 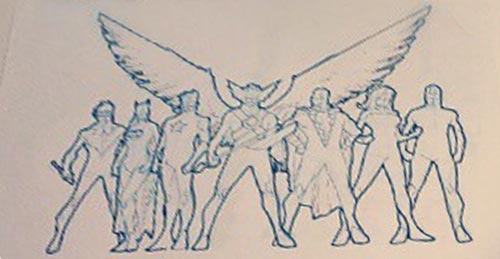 This image is cropped. For the full image, visit instagram.com/p/UgmeoAtmwa/

From left to right, that's Nightwing, Batgirl, Booster Gold, Hawkman, Captain Marvel Shazam, Black Canary, and Red Tornado. What are these characters doing together? Is this an upcoming comic book team? The picture's comment tag isn't a lot of help in deciphering this mystery.

Of course, this tells us nothing about the image that we can't see by looking. Given an absence of information, comic book fans do what they are apt to do: freak out. (And yes, the first hashtag by Silva for that image is "#hankman," and not "#hawkman." Was that a typo? Those two keys are nowhere near each other on my keyboard.)

The images have been discussed in the ComicBookResources.com Forum, repeated at BleedingCool.com, covered by Russ Burlingame at ComicBook.com, and even analyzed here in the Boosterrific Forum. Booster Gold fans sure are excited about seeing Booster, even if it's only as a tiny thumbnail sketch.

The question is whether or not this image from Silva represents news of a return for Booster. The answer is that we don't know yet.

DC hasn't announced anything, and Silva has been known to draw commission that have nothing to do with official DC publications. Could it be a pitch by Silva? A first draft of an upcoming book?

There's no evidence yet to suggest anything, so make of it what you will. My advice is that you not get your hopes up until you see it in writing, but I share your enthusiasm that maybe the Booster drought may be coming to an end.

Eyz posted on Jan. 28, 2013 at 12:50 PM
And good thing, he seems to be sporting a whole new different redesign here!
It's tiny and a bit sketchy, but it does look different 'round some bits.