Time Flies When We're Having Fun

Here's something I missed in the run up to Comic-Con: a teaser poster for DC's Year of the Villain event! 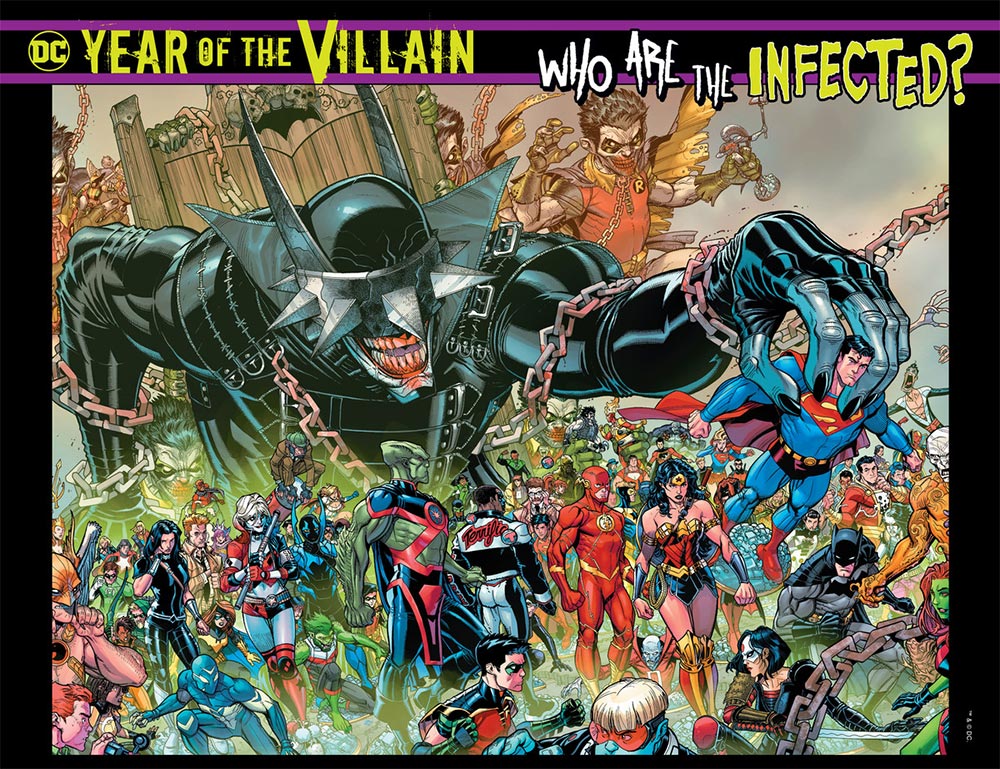 You probably can't see him, but Booster Gold is in there, right between Flash and Wonder Woman! 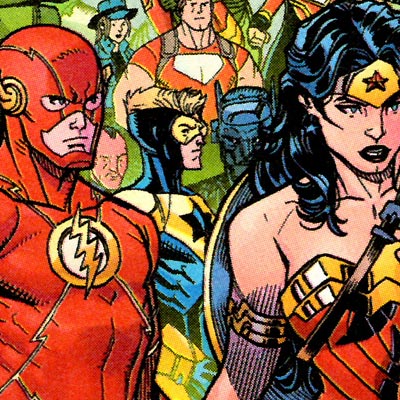 This ad was released online in July and appeared in all DC imprint comics published this week. (Does anyone recognize the artist? Drawn by Nick Bradshaw, inked by Cully Hamner, and colored by Hi-Fi Designs.) It specifically teases the first storyline in the upcoming Batman/Superman #1.

Booster's inclusion here shouldn't come as a surprise, as he had already been linked to the issue in May's DC's Year of the Villain Special. I guess we'll have to buy Batman/Superman #1 — in stores August 28 — to find out if Booster is truly among the "Secret Six" victims of the Batman Who Laughs.

In very related news, Jonathan Reichman pointed out that this week DC announced six new series to tie directly into the Batman/Superman series and four (and counting) Tales from the Dark Multiverse one-shots. One of those stories hints bad things for our hero.

Per the press release from DCComics.com:

TALES FROM THE DARK MULTIVERSE: INFINITE CRISIS #1
Writer James Tynion IV (Justice League, Justice League Dark) and artists Aaron Lopresti (Wonder Woman) and Matt Ryan (Damage) team up with cover artist Lee Weeks for this dark turn on DC’s mega-event Infinite Crisis. The destruction of Superman, Batman, and Wonder Woman, the rise of Alexander Luthor and Superboy-Prime, and the rebirth of the Multiverse all began with Ted Kord, the Blue Beetle. Kord saw it all coming and died with secrets that could have saved the world. But in the Dark Multiverse, Blue Beetle survives, and with the death of Maxwell Lord by his hand, Ted sets off events that irreversibly alter the lives of not only the Justice League, but also his best friend, Booster Gold. In trying to prevent a crisis, Blue Beetle becomes the crisis, and the Dark Multiverse will never be the same.

Thanks for warning us that was coming, Jonathan. Let's see if we learn more when DC releases November solicitations (probably next week).

Shawn posted on Aug. 16, 2019 at 9:29 AM
I think the artist is Chris Sprouse at least it looks like it. We know 5 of the Secrect Six through solicitations and the final issue of the Batman who Laughs, Shazam!, Supergirl, Hawkman, Blue Beetle (Jaime) and James Gordon. So one spot left, Booster, kinda hope not.

Boosterrific [Official Comment] posted on Aug. 16, 2019 at 10:40 PM
Good call, Cort. Comics-now.com identifies the artists as Nick Bradshaw, Cully Hamner, and Hi-Fi. Confirmed on Twitter. I will update the post.

Heroes in Crisis isn't even over yet, and Booster Gold is already being included as a possible victim of the next round of DC's version of Russian Roulette. 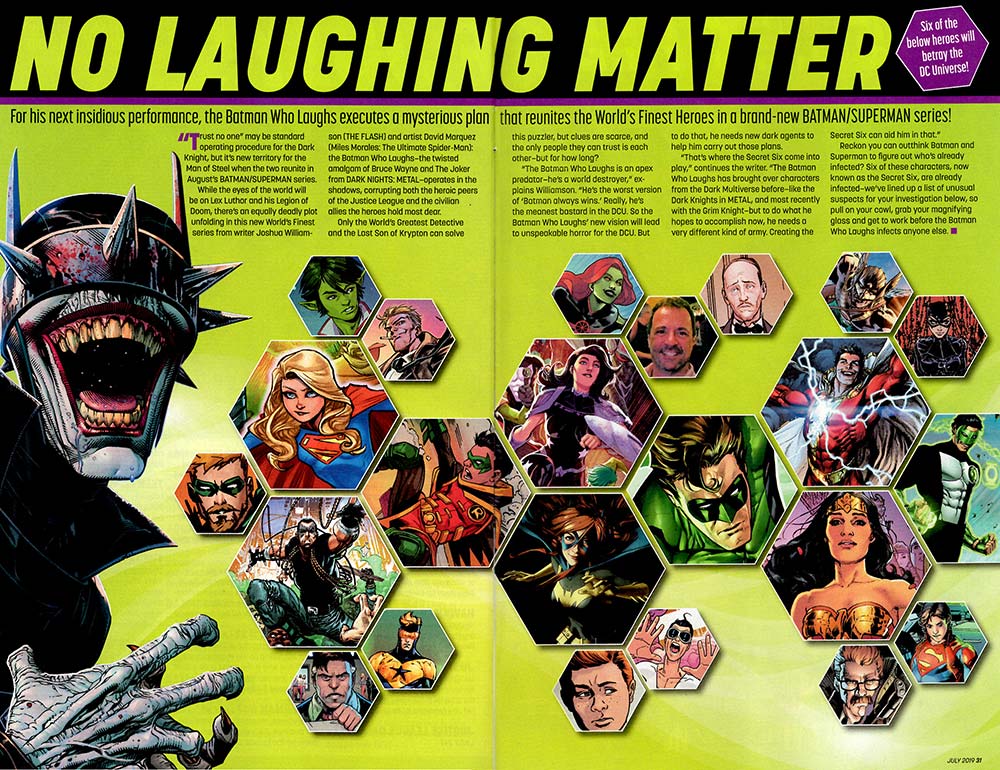 This is the house ad that ran in this week's DC's Year of the Villain Special advertising for August's upcoming relaunch of Batman/Superman. As you can see, our hero, Booster Gold, is included among the list of possibilities to become the newest threat to the DC Universe in August's relaunch of Superman/Batman Batman/Superman.

The series writer, Joshua Williamson, spoke about the upcoming series with The Hollywood Reporter.

"We discover, through the Batman Who Laughs series that the Batman Who Laughs have been working on this massive plan since Metal. What it is is, he has sleeper agents throughout the [DC Universe]. They’ve been infected, and they’re slowly turning into the worst versions of themselves," Williamson teased. "Some of them know they're changing, some don't. Some aren't aware it's kind of like a Jekyll and Hyde situation where they're not aware of [what] the other side is doing.

I can't say as I'm particularly enthusiastic about this, but I think it's more the timing than the concept. What with Metal, Doomsday Clock, Heroes in Crisis, Leviathan, "Year of the Villain," etc., it's starting to feel like villains having the upper hand is the rule, not the exception, in the modern DCnU. A little sunlight, some *joy*, some *fun* would do everyone some good. Why bother being a hero anymore if it's never anything but murder and sadness? No one likes to always be in crisis.

In other words, why so serious, DC?

Jonny posted on May. 3, 2019 at 12:26 PM
If anything, I hope Booster Gold is one of the ones affected, because he has truly not been acting like himself in anything written by Tom King. I could see them using this story to undo some of the bad stuff that Tom King has done to fan favorite characters.

Side note: Joshua Williamson is really good. He is one of the best Flash writers in years. And on top of that, he is a fan of the Flash. He has had so many nods to the previous continuity to really enrich his book. If this is used to explain why Wally West went so far off the deep end to retcon Heroes In Crisis, I'm so game. Joshua Williamson's new Batman/Superman has my undivided attention!

Patrick McMullen posted on May. 3, 2019 at 5:54 PM
I would love a Booster Gold crazy capers in time series. Something fun, with super-heroics and humor.

Eskana posted on May. 6, 2019 at 9:53 PM
I agree.... if they could explain away Booster's out-of-character behavior since The Gift, that would be great. Maybe it could even lead into Booster, freed from the influence, going back to his old time-traveling adventures with Rip in a new separate series... now joined by the alive-again Ted Kord...
Well, I can hope, can't I?

A Note on Sales

Comicsbeat.com just ran an article ("DC Comics Month-to-Month Sales: June 2010") by Marc Oliver-Frisch looking at sales trends across all DC Comics titles. As I was reading over it, I noticed that although Booster Gold is already on the below-average side of the sales bell-curve and trending downward, DC's recent cancellation threshold appears to be much lower than I had previously predicted. Instead of 10,000 copies per month, the threshold lately looks more like it may be as low as 7,000 copies per month. That's probably terrible for the state of the industry, but great news for Booster Gold. That gives the title even more time to turn it around, especially as it is still selling pretty constantly around 20,000 copies per month, roughly equal to the other second-tier heroes titles such as The Outsiders, Power Girl, and Secret Six. That's not such bad company, really.