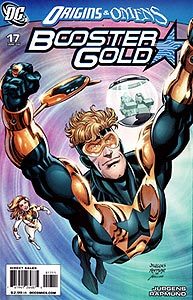 Cover Description: Booster Gold flies towards the reader with Michelle Carter, Skeets, and Rip Hunter in the background.

Issue Notes: The backup feature in this issue ties into the "Origins & Omens" event running throughout the DC Universe in issues released in February 2009.

Story Notes: This story, yet another re-telling of the origin of Booster Gold (the 3rd in three years) is credited to Dan Jurgens, the creator of Booster Gold. However, it contains some notable deviations from the previously recorded history of Booster Gold. Whether these are an oversight by Booster's creator or part of the new DC Universe in the wake of the recent events of Final Crisis remains unclear.

Page 20, panel 1
POWER DOWN: Booster complains to Skeets II that his "suit" is sluggish. This must be a reference to the reaction time provided by the suit in response to Booster's actions since no version of his current power suit (a redesign of his original Mark I power suit) has ever been responsible for the speed of any type of locomotion. Booster's flight power is granted by the Legion of Super-Heroes Flight Ring that Booster wears prominently on the middle finger of his his left hand.

Page 20, panel 5
POWER UP: Booster passes the time during a power suit tune-up by Rip Hunter by retelling his origin. As Booster begins narrating his origin story, the panel depicts his father. This is actually the first time that his father has appeared visually in the telling of Booster's origin.

Page 21, panel 5
SCHOOL'S OUT: As Rip Hunter and Michelle Carter stand before a blank (!) chalkboard, Booster claims that he did not know that the Time Sphere that he stole from the Space Museum belonged to Hunter. However, the original origin story as seen in Booster Gold, Vol. 1, #7, clearly shows the Time Sphere, which was at the time even labeled as "Rip Hunter's Time Machine." 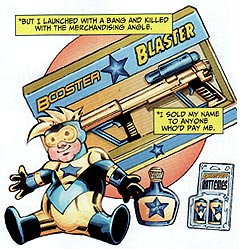 Page 22, panel 4
Michelle Carter has never actually taken the name Goldstar, and so far as this chronicle of the history of Booster Gold is aware, has never been called such. While she did don the magnet-powered suit in Booster Gold, Vol. 1, #20, it was not to fight crime but rather to enjoy the sensation of flight.

Page 23, panel 5
Booster's comment, "if things go sour, I can always turn to Bats," referring to Batman, is ironic (no doubt intentionally so) in the wake of the conclusion to the recent events of Final Crisis.

Boosterrific Review: Geoff Johns' Booster Gold, Vol. 2, #4 was such an enjoyable read that with this issue Dan Jurgens returns to that issue. Using previous events as a backdrop, Jurgens tells the tale of what really happened behind the scenes to restore the proper history of the second Flash following the intervention of Rex Hunter. While it is best not to think too hard about how the events of this issue relate to those of the previous issue (mainly because there are no answers to the many, many questions that this issue raises), this issue is an action/adventure story in the best Hollywood popcorn-movie convention.

Like any action-oriented Hollywood super hero movie, the issue also includes an extended origin story for our hero to catch an unfamiliar audience up to speed. Straightforward and to-the-point, the origin story may be the best part of the issue as it sums up Booster’s complex history while teasing his near future.