Over at Newsarama/GamesRadar+, Michael Doran has started speculating about what DC might have in mind for January/February 2021 in regards to the mysterious "Generations" event teased in Detective Comics #1027.

I don't agree with all of Doran's theories, and he altogether avoids guessing how we'll reconcile getting both the original 1985 Booster Gold (seen on the solicited Generations: Shattered cover) and the 2007 time cop Booster Gold (hinted at in the dialogue of Detective Comics #1027) in one event. But his general conclusion seems reasonable enough. I quote:

In summary, 'Future State' won't be a precursor to a reboot (which DC really wants you to know isn't happening), but a lead-in to coordinated refresh/line-wide jumping on point the publisher can market heavily without alienating existing readers and throwing the continuity baby out with the bathwater as it did with 'The New 52.'

Not a reboot but a "refresh"? Sure, okay. Whatever. I don't have any problem with that. I didn't have any problem with that when DC tried it with Convergence or 52 or Zero Hour or any of the many, many other non-reboot reboots DC has attempted over the past four decades or so. If you read superhero comics long enough, you'll get used to publishers trying new initiatives to bring in new blood, which they should. Children are the future, after all.

(Trivial digression: We didn't call Crisis on Infinite Earths a "reboot" back in the day, either. Interestingly, Google and Wikipedia sources credit the term "reboot" in its modern, "continuity reset" meaning to fan discussion of Mark Waid's 1994 re-imagining of Legion of Super-Heroes continuity in the wake of Zero Hour, which was itself the second major overhaul of LSH continuity. Those fans were computer-savvy users of the World Wide Web-precursor Usenet, so the adoption and retasking of the computer term came naturally. Therefore, DC's own history of recreating their properties over and over again was the reason the term was created in the first place. You brought this upon yourself, DC!)

To make your own informed guesses about what the future might hold (and get a glimpse of the issue's alternate cover, which also includes Booster Gold!), you can read the whole article at gamesradar.com.

Eskana posted on Oct. 5, 2020 at 7:54 PM
The article does put out some interesting theories.... I would love to see a return of time-cop Booster, and I also liked the older, experienced, Rip-Hunter's-dad Time Master because I would love to see the adventures of this time-traveling, time cop family. (Hey, even throw in Rani and Michelle... with personality. They can join the team!)
Pipe dream, I know...

V posted on Oct. 8, 2020 at 9:39 PM
This will be spoiler free. However, DC already released the entire plot. They didn't label it. It's possible to find. They also released an outline full of clues. That's the Rebirth introduction.

(An incomplete but helpful reading list was also planted on SOMEONE. It's funny if you get it.)

They have everyone so focused on who is around that nobody would think to check...who isn't around, who changed, and who is lying. One repeating person is the right voice on the wrong body every time.

So, some hints for Boost:
There are multiple Boosters. One of his past fakes may not have a reason to lie again if he shows up. EVERYONE has multiple versions. How they happened is more blatant than anyone would think. It's so obvious that nobody would think twice about a comic artist (and two more).

Final note:
Some characters know they're being watched, and it's not only the readers watching.

That should be vague enough to be confusing in a different way. 2021, more like 'we're getting more fake abstractions that are fully inside continuity'.

Booster Gold is finally back in comic stores after a two year hiatus! And we finally have a definitive answer to last month's debate over what piece of art Dan Jurgens, Norm Rapmund, and Brian Miller were working on. 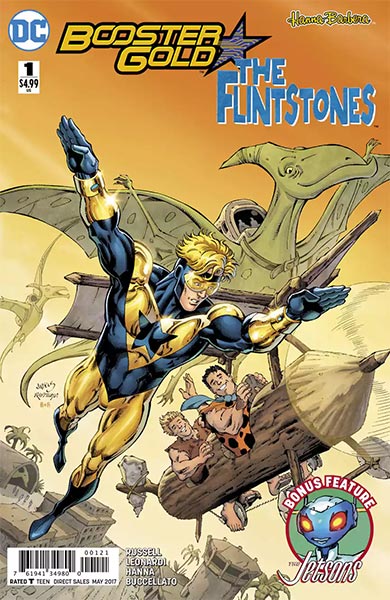 Gee, that star sure looks familiar.

Those wonderful people over at CBR.com have an 11-page preview. Eleven pages! Fortunately, it's a 48-page comic.

The preview certainly raises plenty of continuity questions for our favorite Chronal Crusader, but that's to be expected for any character who has missed two continuity reboots. Before anyone freaks out (and I'm probably talking to myself here), keep in mind that this is our first look at post-Rebirth Booster Gold.

What are you doing still reading this? Go buy your copy of Booster Gold/The Flintstones Annual Special #1 now! Heck, there are two covers, each featuring Booster Gold, so buy two!

Looking at the preview, I really don't like Booster's characterization but at least he's not wearing that awful New52 outfit.

Another good thing is that it seems Dan and Norm still can draw an excellent Booster Gold.

Flame Hawk posted on Mar. 29, 2017 at 8:14 PM
This is an excerpt from Nerdent\'s review of Booster Gold/Flintstones #1.
(http://www.nerdent.net/2017/03/29/booster-gold-flintstones-1/)
DC Bring Back Booster!! That being said this issue wasn't terrible but I was expecting more as the Flintstones satire and Gold's wackiness offered a great pairing. The writing was the strongest part of this issue as the interaction between characters was enjoyable and often comedic. The art offered a Saturday morning feel but often looked incomplete with detail missing from the background.

You Can't Always Get What You Want

So you're still happy, even without Booster, huh?

Last week's poll question: More than six months in, how satisfied are you with Rebirth overall? (59 votes)

Generally speaking, I do think that the Rebirth DC Universe is an improvement over what came before. That said, I'll never be satisfied until I get my Booster Gold back.

On an unrelated note, for those of you like me who missed Booster Gold in the Justice League Action debut in December, TV Guide tells me that Cartoon Network is scheduled to rerun the episode "Night of the Bat" tomorrow morning at 7:30 AM Eastern. Don't miss it twice!

Brady Kj posted on Jan. 7, 2017 at 1:43 PM
You can watch it online. That's how I saw it.
It's a good show, despite its short episode time. DC combined elements from all its successful animated series and gave all the characters designs that suited their personalities.
Booster had a fun introduction. How he's portrayed in the future could go either way, but in the meantime, I thought it was loads of fun.

Surprise, surprise. The most visited post in 2016 was one of Boosterrific.com's few polls on the year. This one originally ran the week of June 10, when I asked you "How satisfied are you with Rebirth so far?"

I had cut back on polls in 2016 because I felt they weren't generating much interest. Well, this one sure did. There have been polls with more voters, but few have gathered so many views.

Since we're on the subject, I might as well follow up. When last I asked, Rebirth was only 3 weeks old. Has your opinion changed in the past seven months? We'll take a look at your response next year!

This week's poll question: More than six months in, how satisfied are you with Rebirth overall? Please visit the Boosterrific Polls page to view results for this week's poll.

Maybe DC isn't giving us any new Booster Gold comics, but that doesn't mean that they aren't publishing anything worth reading. My pull list is short, including only three titles from DC: Dan Jurgens' Action Comics, Kurt Busiek's Astro City, and Mark Russell's The Flintstones.

As disparate as they are, all three titles all have something in common, and it's not subject matter. Action and Astro City are both classic super hero fare. The Flintstones is a beautifully subversive view of modern society in the same cynical vein as Russell's all-too-short Prez in 2015.

What these comics have in common is that all are predicated on an understanding of what has come before. Action builds heavily on the differences between the shared universe environments of the New 52 and the post-Crisis era. Astro City is an exploration of the impact of Silver/Marvel Age style comic-book situations from the point of view of real humans. Flintstones uses characters and situations explored in a famous cartoon to poke its finger in the eye of traditionalists.

In all of these titles, knowledge and familiarity with the referenced source material only makes them better. This is something that DC failed to do in its New 52 reboot. The goal there was to retread old tires without bringing anything new to the experience. If endless reruns worked as a business model, DC wouldn't be trying a Rebirth now.

So while I wait (impatiently) for DC to give me another Booster Gold comic (which is not happening this week), I've still got some comics to read. I hope you do, too.