How Long Is Long Enough?

Serious question: how long is long enough before something should no longer be considered a story spoiler?

Case in point: it's been nearly 2 months since the release of Blue and Gold #8 in which we learned the secret identity of one of Booster Gold's longest-running foes.

Is 2 months long enough that I can now update the site with the character's secret identity without spoiler warnings? Or should I at least wait until after the trade collection is released in September? Or maybe longer?

What do you think?

This week's poll question: Can I publicly discuss the Black Beetle's identity without a spoiler warning? Please visit the Boosterrific Polls page to view results for this week's poll.

UPDATE 2022-07-19: The results of this poll indicate that you overwhelmingly think that it's been long enough. While I *want* to talk about this, I don't *need* to talk about it yet, so I think I'll try to wait until the trade is released. The big reveal is a fun part of the series, and I really don't want to ruin it for anyone who doesn't want it ruined.

Have you read Batman Beyond #48 yet? If not, that's your assignment this weekend.

If you don't want to go to your Local Comic Shop for some reason — like, maybe you're still bailing out from a tropical storm that reached hundreds of miles inland like I am — you can always buy the digital comic at comixology.com (assuming your power has been restored).

Judging from the response to last week's poll, most of you are cool with that option.

Last week's poll question: Should the Boosterrific database include comics existing only in digital formats? (28 votes)

I have to admit that digital comics do have some unique positives. You certainly don't have to worry about a leaking roof or flooded basement — or, if you're on the left coast, a raging forest fire — damaging your digital comic collection. That's worth considering in 2020 and beyond.

My God, It's Full of Tubes

First things first: if Booster Gold appeared in a new comic today, I remain unaware of it. But Batman Beyond #48 is due next week, so we've got that to look forward to.

Second things second: Jennifer wrote me to note that Booster Gold's cameo from Superman: The Man of Tomorrow #7 is not in the Boosterrific database. She's right. It's not.

I mentioned the cameo here on the blog the week it was released back in June, but I never added it to the database. As a reminder, here's what that cameo looks like:

As a matter of tradition, all the books in the Boosterrific database are the printed editions (you know, the old-school kind that you can read without LED screens and batteries). Therefore, I had been waiting for DC to reprint the Digital First Superman: Man of Tomorrow series before adding it to the site. That's what DC did in the past. Until lately, they have combined 2 or more of these digital comics into a single floppy available at your Local Comic Shop.

But 2020 is interesting times, and DC isn't the same company it was at the start of the year. They have yet to announce any printed editions of Superman: Man of Tomorrow. It might come eventually as a trade collection of the whole series, but these days who can tell?

So the question becomes: should I change the way I've done things in the past to start adding individual issues of digital exclusive content? Or should I hold fast to my old fashioned concepts of what a "real" comic book is? What do you think?

If you missed your chance to pick up Dark Nights: Death Metal #3 at your Local Comic Shop two weeks ago, you get a second shot this week. Considering the heavy metal music theme, instead of a "second printing," we should probably call it a "re-release."

And while we're on the subject of Death Metal, let's look at your response to last week's poll.

That's about as close to an even split as I could have expected, and those responses are coming from people who love and watch for Booster Gold appearances. I guess that means that *was not* Booster Gold in Dark Nights: Death Metal Guidebook. Case closed?

No New Releases... Or Are There?

After Harley Quinn expressed her feelings last issue, I was expecting to see Booster Gold in yesterday's Harley Quinn #75, in which everyone taking up space in Harley's head helps her celebrate her birthday. But no. There's no sign of Booster Gold. Apparently Harley's love is as fickle as she is.

The closest we get to Booster in the "star-studded" series final issue is this t-shirt worn by Harley's west coast roommate, Becca.

Given that the series has been canceled and DC has yet to announce a replacement, the question becomes "Have we seen the last of #GoldieQuinn?" Only time will tell. (But we can hope.)

In related news, Booster may have skipped Harley's finale because he was trapped in a dungeon in another of yesterday's books, specifically Dark Nights Death Metal Guidebook. I say may because I'm not entirely sure myself.

Take a look at this panel and see what you think: 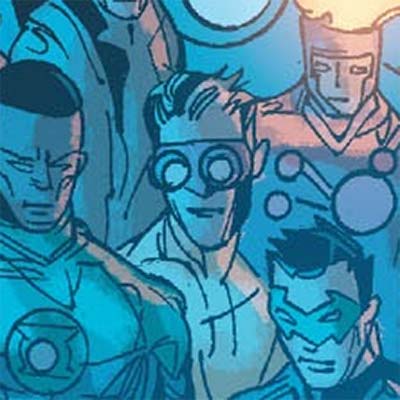 It looks like *somebody* was in a hurry to get this panel done.

Is that Booster Gold? We saw the same crowd in Dark Nights Death Metal #3, and there aren't a whole bunch of characters it could be other than Booster Gold. Animal Man has angled goggles, Blue Beetle's hair is covered, and it definitely isn't Black Lightning.

So, you've seen the evidence. What's your vote? Booster or not?

This week's poll question: Does the face in the crowd in Dark Night Death Metal Guidebook belong to Booster Gold? Please visit the Boosterrific Polls page to view results for this week's poll.

Michael Stalans posted on Aug. 19, 2020 at 9:48 AM
I'm dissappointed that Booster doesn't make one more appearance but maybe we'll see #GoldieQuinn in some point in the future, who knows?