The comics industry is slowly getting back to normal, as you can tell by the release of solicitations for upcoming releases. While it doesn't look like our hero will be appearing in any of DC's August 2020 comics, the publisher's latest solicitations do include a confirmation of something we first spotted last month:

BOOSTER GOLD: FUTURE LOST HC
written by DAN JURGENS and others
art by DAN JURGENS and others
new cover by DAN JURGENS and NORM RAPMUND
The original solo series for Booster Gold, self-serving hero from the future, concludes with this collection of Dan Jurgens's formative mid-'80s stories! Booster finds himself a wanted man, and then lands in the polychromatic sights of the Rainbow Raider! Later, Superman gets in the middle of a battle between Booster Gold and…Booster Gold? Collects Booster Gold #13-25, pages from Millennium #3-6 and #7, Action Comics #594, Secret Origins #35, and more.
ON SALE 09.01.20
$39.99 US
400 PAGES
ISBN: 978-1-77950-672-6

That's right, the companion volume to the superb Booster Gold: The Big Fall collection will be in your Local Comic Shop this September. What could that "and more" mean? I'm giddy with anticipation. 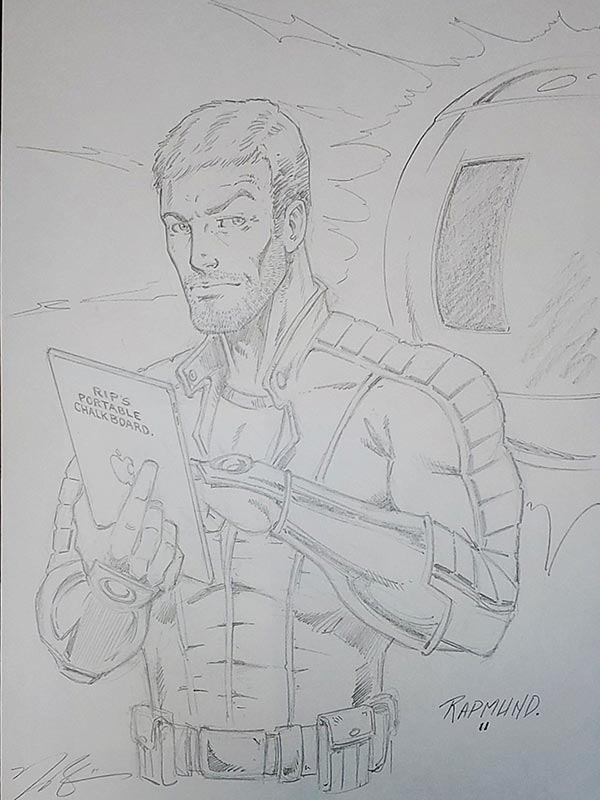 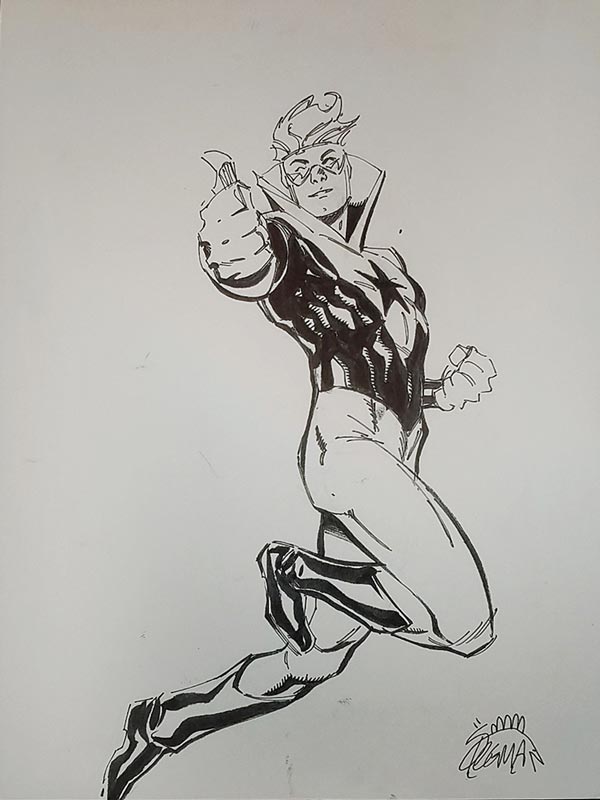 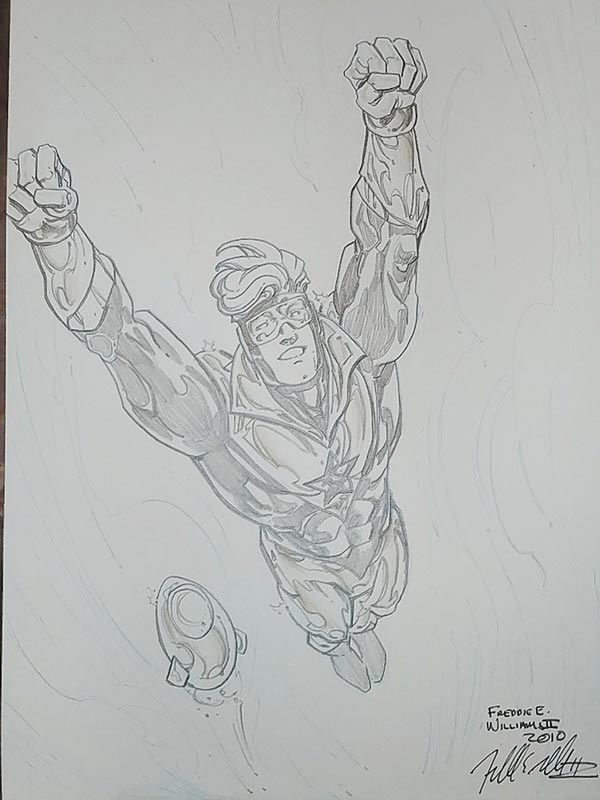 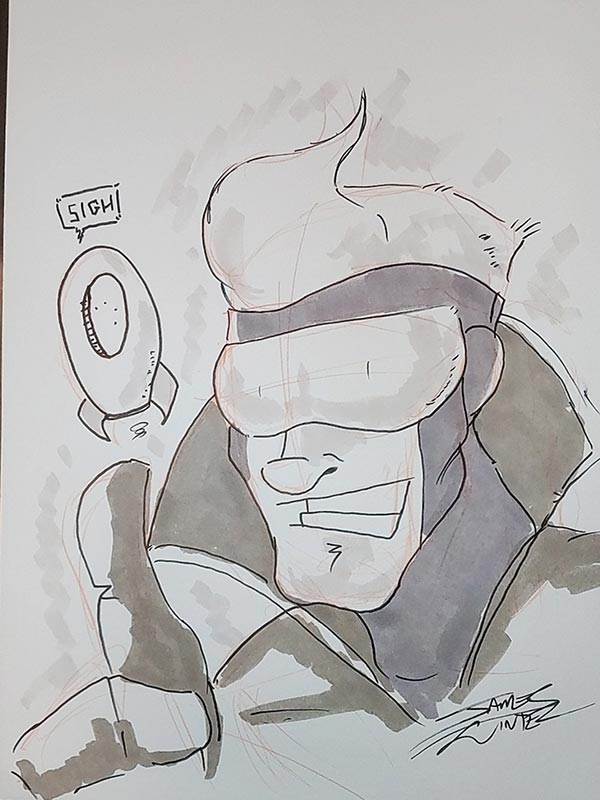 Going Back to Cort

Booster booster Cort harvested a bumper crop of commission Booster Gold this season. Check them out! 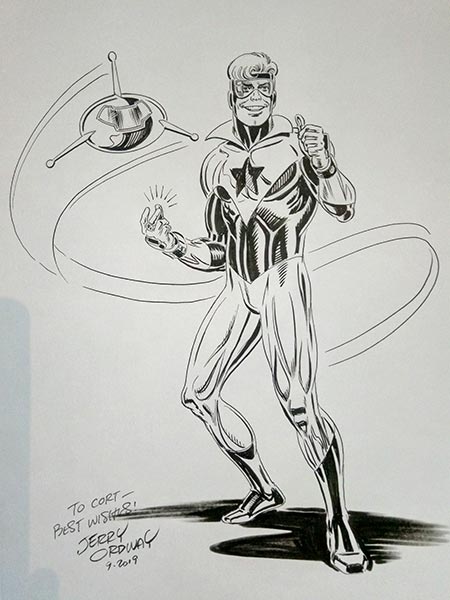 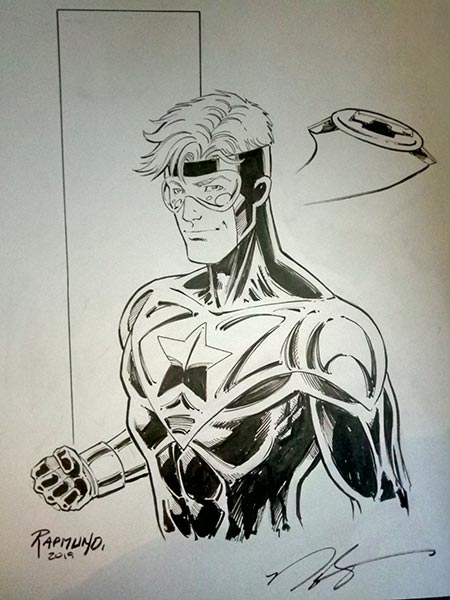 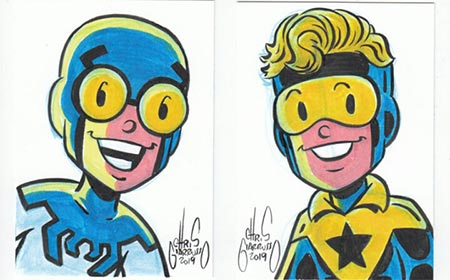 Boosterrific as always, Cort. Thanks for sharing.

Cort posted on Oct. 16, 2019 at 9:35 PM
Thanks! Always happy to share with some Booster boosting. (The Giffen piece in particular, I'm surprised I haven't really seen any others. My friend just happened to bump into his agent at a con and the agent offered commissions since he wasn't there to sign. So I definitely wanted to share that along, as one of Boosters biggest writers alongside Jurgens.)

I'm excited to see what next year will bring. Probably won't get as many as I did this year, but I'll definitely try to have some great pieces to share. 22 total so far! My Booster commission book is coming along.

Boosterrific [Official Comment] posted on Oct. 16, 2019 at 10:10 PM
The Giffen is my favorite. I've always been attracted to his art, perhaps because it is so atypical of DC's usual productions.

Together Again for the First Time

For the first time since Rebirth restored Ted Kord as Blue Beetle, he and Booster Gold are front and center in action again!

Okay, maybe they're not "in" action, but they're close enough. Ted isn't much of a hero these days, not since the heart attack that sidelined him into mentoring Jaime Reyes. But he can still don his old costume for special occasions, such as when the real Flash — Wally West! — races S.T.A.R. Labs founder* Speed Buggy for charity as seen in this week's Flash/Speed Buggy Special.

Thanks to Logan for pointing out our favorite heroes in the crowd. (Say, does anyone recognize the kid in the yellow shirt between Igoo and Chunk? Or the character below Grape Ape with the purple stripe down his front? Or the kid in the white jacket behind Robin? They're all probably either Flash or Hanna-Barbera characters. Any guesses?)