When Heroes Fail to Save the Day

Two months ago, we learned how DC's Legends of Tomorrow executive producers Phil Klemmer and showrunner Keto Shimizu got DC to agree to allow Booster Gold to finally appear on their show.

Late last week, we learned why.

In response to fans questions on Twitter, Shimizu herself tweeted:

DC was in our corner trying to help our chances of renewal. They and WB wanted us to survive. We were asked for a new character to “excite” the audience, and attract more viewers. We requested Booster and DC agreed. It was all in an attempt to save the show.

That's right: they were counting on Booster Gold to help save them. And Booster failed.

As a Booster Gold fan, I should probably point out if you want to stir up public support, it would definitely help to actually tell us in advance to tune in to see our hero. (Early notices only teased a fallen hero whose "golden years are in the rearview mirror.") It's also really hard to boost week-over-week ratings if a character appears only in the season finale. (Booster's episode, "Knocked Up, Knocked Down," had the second-smallest audience of the season; the next-to-last episode was the smallest, meaning Booster actually did bring it up somewhat, and I certainly would have watched the following week if there had been one.)

That said, failure is kind of Booster's story, right? His heart is always in the right place, but he often overestimates his own abilities while underestimating the consequences, sometimes making a bad situation worse. Sometimes much worse. Cancellation worse.

However, Booster Gold's most sterling quality is that he is no quitter. After ruining the day, he'll dust himself off, take ownership of what he did wrong, and set out to make it right. It's the prototypical hero's journey. Everyone loves a redemption story.

And that's why I'm now strongly hoping that Legends of Tomorrow does find a way to return to the screen, at least long enough to give its fans the ending they deserve. We can all rest assured that Booster Gold will continue working behind the scenes until he has helped all those who need rescuing. Because that's what real heroes do.

A friend of mine noticed that I never get tired of showing off Cort and Blot's Booster Gold commissioned sketches. So last month at Gary Con, he got me this: 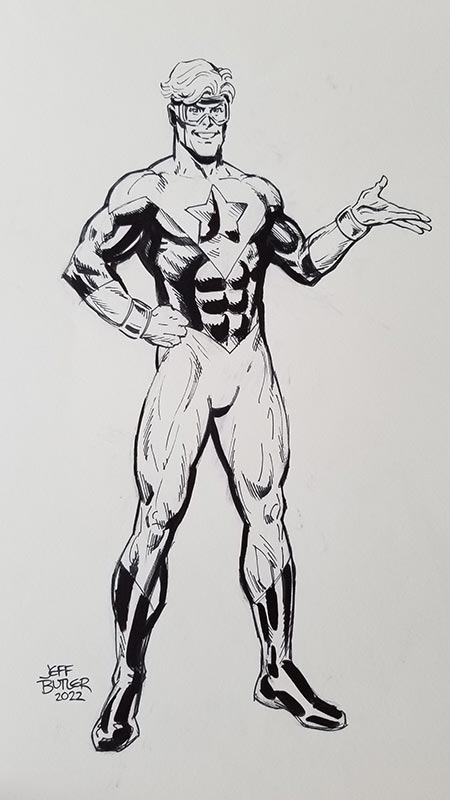 I now have a convention sketch of my very own! One might not seem like a lot, but it's a pretty high number for someone like me who never leaves the house.

Thanks, James (and Jeff!)

Cameo Appearance at the White House

If you watched The Flash season 8 episode "Impulsive Excessive Disorder" on Wednesday night, you must have seen this: 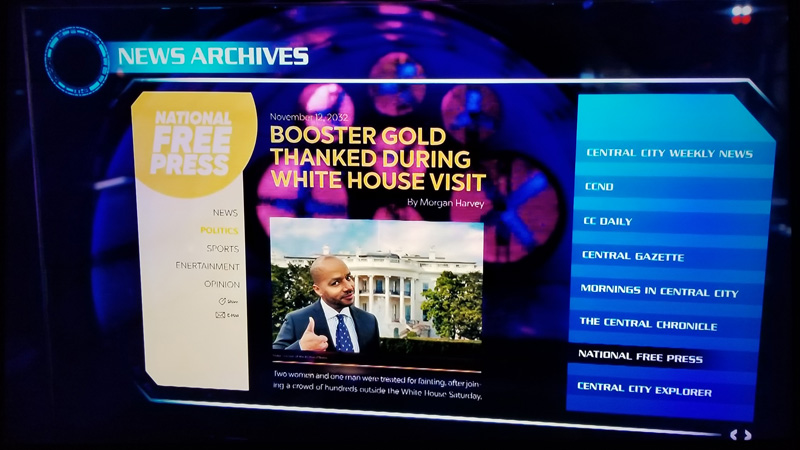 Nicole Drum provides a recap of Booster's appearance at ComicBook.com, but the article fails to mention that the White House visit is clearly a nod to Booster Gold's comic book origin story (as told in Booster Gold #8 and #9).

Meanwhile, over at EW.com, Chancellor Agard got the behind-the-scenes story of how the cameo came to be directly from Flash showrunner Eric Wallace:

"It was just a kind of a fun coincidence," he tells EW. "I was in post working on episode 806 and I knew the kids, Bart and Nora, would be looking at future things in the Flash Museum. And the head of post for our show and for Legends is the same person, Geoff Garrett. He happened to mention, 'Oh, by the way, don't tell anybody, but Booster Gold is going to be appearing in the finale of Legends.' I'm big Booster Gold fan, and I went, 'Hey, have they cast that person yet? I have a crazy thought. What if we see our kids in this episode looking through newspapers and we see whoever you guys have cast really fast, kind of a connected thing?' And he said, 'Well, it's funny you should mention that, Eric, because the finale of Legends airs the week before Flash returns.'"

Wallace continues: "So we made a few calls. I called up Phil [Klemmer], the showrunner of Legends, pitched him the idea. After he stopped laughing so hard he's like, 'Of course, definitely do that.' And then it was a very simple matter of just talking to the actor Donald Faison and getting his permission just to use a picture. He was into it. Next thing you know, it's in the show. It all happened in literally 24 hours. It was hilarious."

Now that Donald Faison's Booster has been in two "Arrowverse" CW shows two weeks in a row, I'm starting to wonder if this isn't the beginning of a trend? I sure hope so. Personally, I'd like to see Booster Gold on every television show every day; I just can't get enough of that guy.

People Are Talking, Talking About People

Whether or not I'm a fan of CW's programming, I have to admit that Donald Faison's portrayal of Booster Gold on DC's Legends of Tomorrow season 7 finale has certainly raised the profile of the character and introduced him to a whole bunch of people who have never actually set their hands on a DC comic. That's an objectively good thing.

So it is a worthwhile experience to read how the show's executive producer Phil Klemmer finally got around to adding Booster to his long-running show.

Here he speaks to Chancellor Agard for ew.com:

EW: Arrowverse boss Greg Berlanti has reportedly been working on a Booster Gold movie for years. How did the character wind up on Legends?

Klemmer: As you might expect, through the side door you'd least expect it [to]. I just remember [co-showrunner Keto Shimizu] and I were on a call with Kim Roberto at DC, and we were just talking about fun characters. I think somebody threw it out there, of course never [imagining] in a million years would we get Booster Gold. And then it felt like 15 minutes later, DC called us back and was just like, "Hey, Booster's yours." And just you have a moment of being like, "Okay, this is clearly a prank of some sort, because..." We were all giddy and in disbelief and then it just became a quest of finding an actor who was worthy of the character.

EW: Why was Booster Gold on your mind to begin with? Were you just looking for a DC character to bring in at the end of the season? How did Booster end up fitting the needs of the story?

Klemmer: It's always the tonal fit and just knowing, I don't know, there's just something so lovable and unexpected. You just knew that he was going to work as kind of a bit of the merry prankster, a bit of a BS artist.

Klemmer was also quizzed by Joshua Lapin-Bertone at DCComics.com:

DC: How familiar were you with Booster before this?

Klemmer: I just knew about him from the early days of Legends, when I would hear of various projects, whether they were TV shows or movies, in the same halls where I was working. And obviously dealing with Rip Hunter in early seasons as well. I just assumed that he was going to have his own project. I never imagined that he would come into our world.

DC: For building this version of Booster, did you draw upon any particular stories? Or did you build him from the ground up?

Klemmer: The creation of a character really takes place over the course of that first season, and then seasons to come. It's going to really be a correspondence between us as writers and Donald as a performer. We definitely wanted someone who is a little off center, and like, a little bit mischievous. But we also just wanted a charisma bomb.

And we round out our media tour with Klemmer's conversation with Damian Holbrook of TVInsider.com:

TV: Is the plan to keep Donald on the board?

Klemmer: For sure. We’re not gonna let Booster get away. I’m really excited to write him—he’s the kind of character you wish you could be. You could get away with murder and be so charming that you never really have to suffer the consequences. He’s the antithesis of a writer. Writers are deeply neurotic and self-loathing self-doubting, etcetera. I think that’s why we writers are drawn to those characters—because those are our secret alter egos.

Season 8 has not yet been announced. Will there be another season of Legends of Tomorrow? If I were a betting man, I'd bet yes (especially if Michael "Booster" Carter is on the field). Legends of Tomorrow is one of the few CW shows that has improved its ratings season-over-season, so I think we should prepare to see more of Klemmer and Faison's Gold come fall.

The Art of Distraction

There's a lot of terrible stuff going on in the world, and it's always nice to be reminded that there's some pretty great stuff, too.

It's only February and Cort Carpenter has been having a busy 2022 adding to his Booster Gold sketchbook. Most of the following were picked up at the recent Fan Expo 2022: 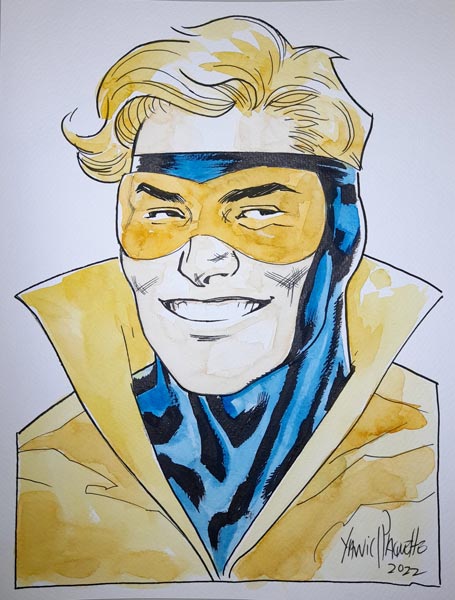 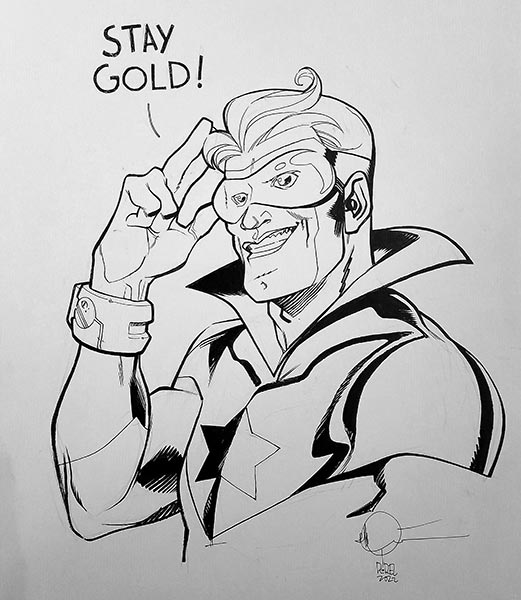 As an added Bonus, Cort also completed some matched sets of Booster Gold and Blue Beetle! 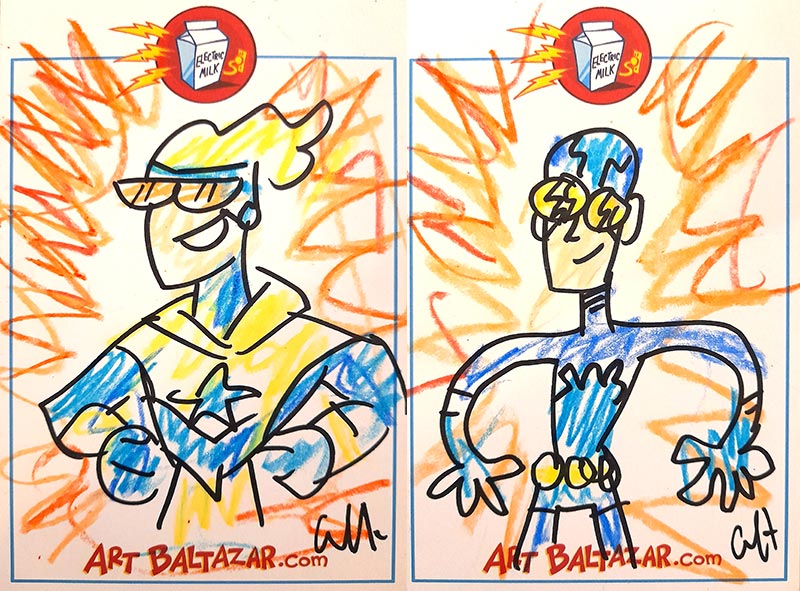 Thanks, Cort! I don't know how you afford all these commissions in this economy, but keep up the great work.