It didn't take long after Booster Gold joined the Justice League before he and Blue Beetle were inseparable. (Some might say insufferable!) The pair quickly became the Abbott and Costello of superheroics, their pranks and self-interested business ventures providing a comedic release from the stress of facing down would-be world conquerors six days a week. 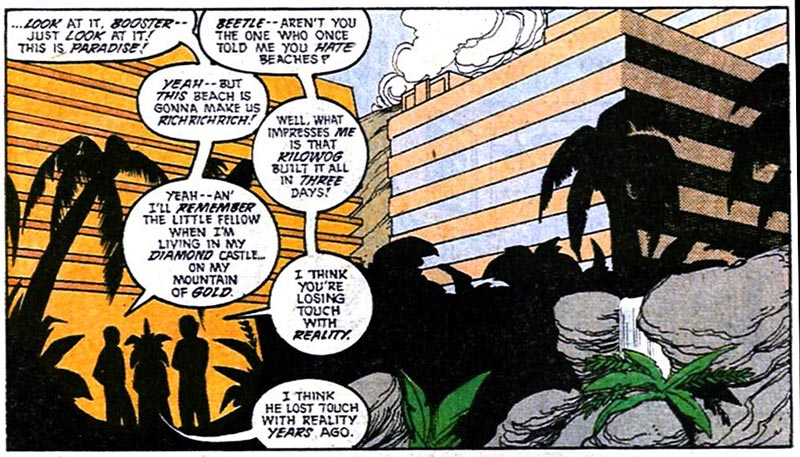 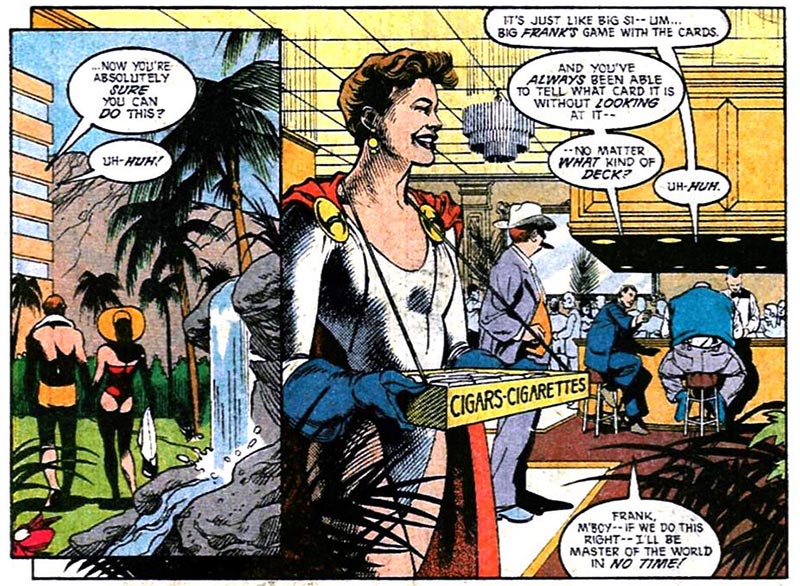 This Day in History: 13 Years Gone

The good times ended thirteen years ago today with the release of Countdown to Infinite Crisis. 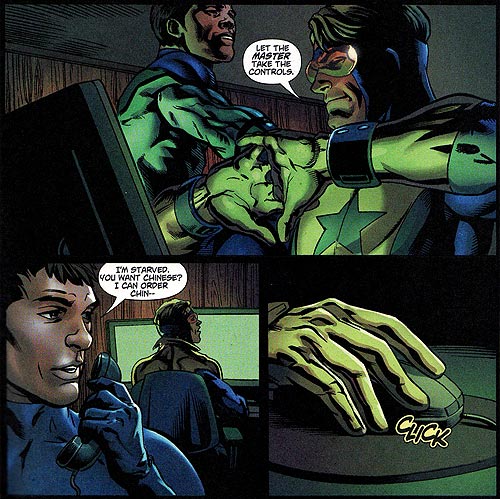 It's a testament to the relationship between the two heroes (and a perfect example of the value of continuity) that their unexpected and violent parting continues to inform Booster Gold's story all these years later.

See you in the funny pages, Ted.

This Day in History: Meet KooeyKooeyKooey

Do you remember What comics you were reading 25 years ago? If you were a Justice League International fan, you were treated to the first on-panel appearance of the tiny Pacific island KooeyKooeyKooey 25 years ago today.

One month later, KooeyKooeyKooey would be the home of the ill-fated Club JLI, a Justice League-themed resort and casino. Club JLI was built by funds embezzled from the United Nations and was robbed by future Leaguer Major Disaster, but neither of those problems were what ultimately doomed it. But you probably know all about that already.

(And if you miss the madcap adventures of Blue and Gold, be sure to pick up the duo's return in Justice League 3000 #12 on December 3.)

Following TGB's weekend comments over his feelings about Giffen & DeMatteis' take on Booster Gold (as detailed here), I decided to look through the old "Justice Log" letter columns for examples of people who felt the same way about G/D's original run. It didn't take too long to find this in the letter pages for JLA #38:

TGB, maybe it will make you feel any better to know that some people have shared your opinion for 20 years.

[The response was written, presumably, by Andy Helfer, editor of Justice League America at the time. JLA #34 was the infamous KooeyKooeyKooey incident. Coincidentally or not, JLA #38 was the first issue following Booster's original resignation from the League.]

tiggerpete posted on Sep. 2, 2010 at 6:03 PM
and here's the kicker, this is pre-internet, shocking when you realize that this is nearly identical to various forum posts that you can come across on both sides of a given issue
Fanboys=consistently upset about something since the beginning of letter columns
I believe the saying goes "you can please some of the people some of the time, but you can't please all of the people all of the time"

Harry posted on Sep. 3, 2010 at 9:36 AM
G&D are divisive writers. To create humor, they are often left to disparaging one or more characters (or at least portraying them in a less than flattering light). Many fans are protective of their favorites and many others are resistant to their comics being "silly". When I was collecting this comics, I must admit that I cringed several times at B&G's antics. It made the characters targets for mockery by my friends (and by proxy, me as well for being a fan). But it also created fans that adored the characters and who would defend them (and G&D). Polarization of the fanbase may not be the way to universal acceptance and top ten sales... but it could be the way to consistently selling 20k issues over 5-10 years. I would hate to see BG regress to immaturity. But I would hate to seem him stagnate as a character. I intend to do my best to enjoy the ride.

TGB posted on Sep. 3, 2010 at 11:34 PM
And it isn't just that - it's become so darned formulaic. Look through each G&D issue and about 1/2 to 2/3s of the way through it, they have Booster monologue about how it isn't right for him to be there, how he's changed so much over time, how they weren't REALLY idiots but were content to let people think so... It's like it's their way of justifying it all. The problem is that here you have polarization of a relatively small fanbase. BG was selling around 20k before the change... does dividing the fanbase keep it at 20k? 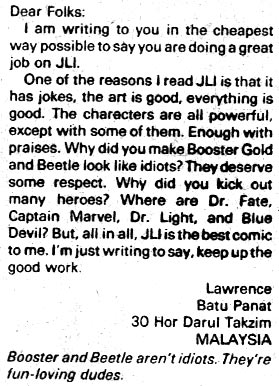 See? They were using the fun-loving dudes excuse even back in 1989. [Again, this is presumably editor Andy Helfer responding.]

Justin Garrett Blum posted on Sep. 16, 2010 at 3:54 PM
I know there are a lot of people who still feel this way about those old issues of JLI--they carry a grudge to this day about the Bwa-ha-ha league. I've never really been a fan of the Justice League in general, so I think G&D's stuff is classic, since I actually cared about the characters for a change, more so than I really cared about the adventures (which isn't to say that G&D didn't do some interesting arcs).