Boys Will Be Boys

The database here at Boosterrific lists every known Booster Gold comic book appearance. That includes all 245 meetings between Booster Gold and Blue Beetle.

However, one comic you'll not see on that list is Starfire #1 (2015), in which the alien princess and model had a drink with "Blue" and "Gold." To correct that oversight, here are the relevant pages: 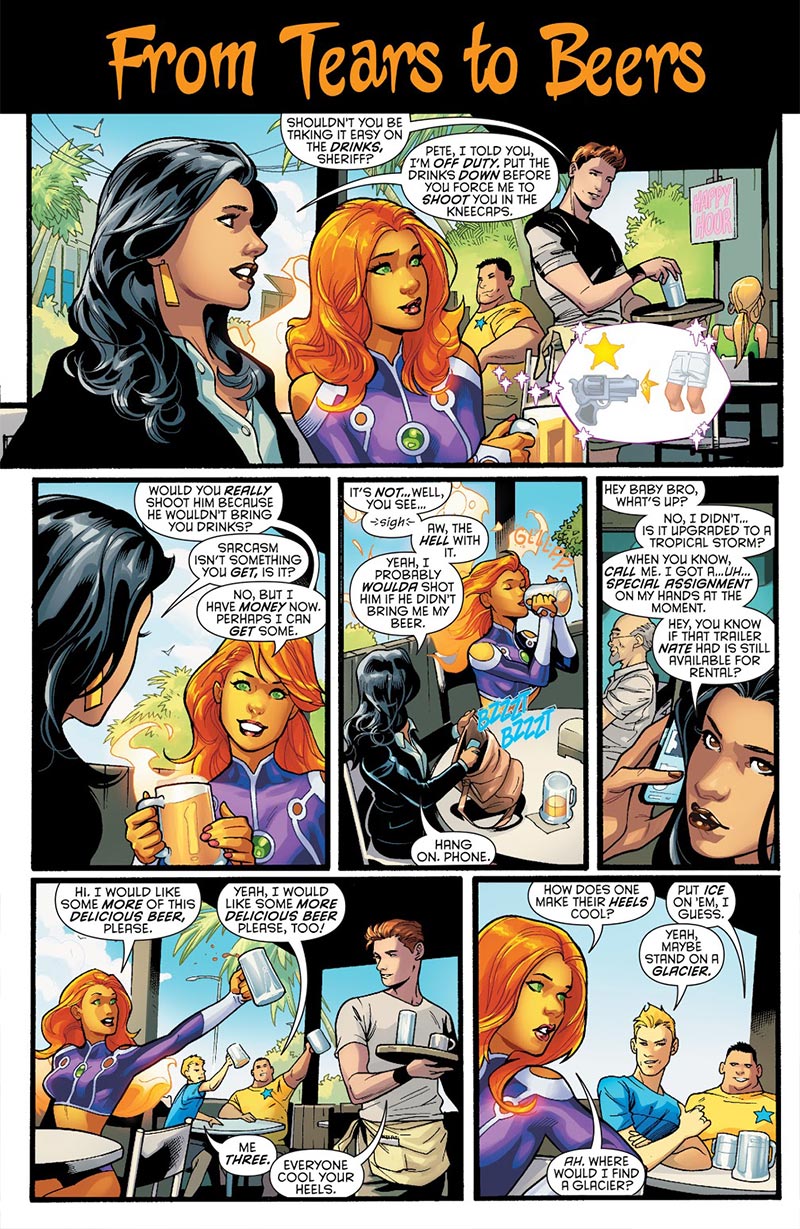 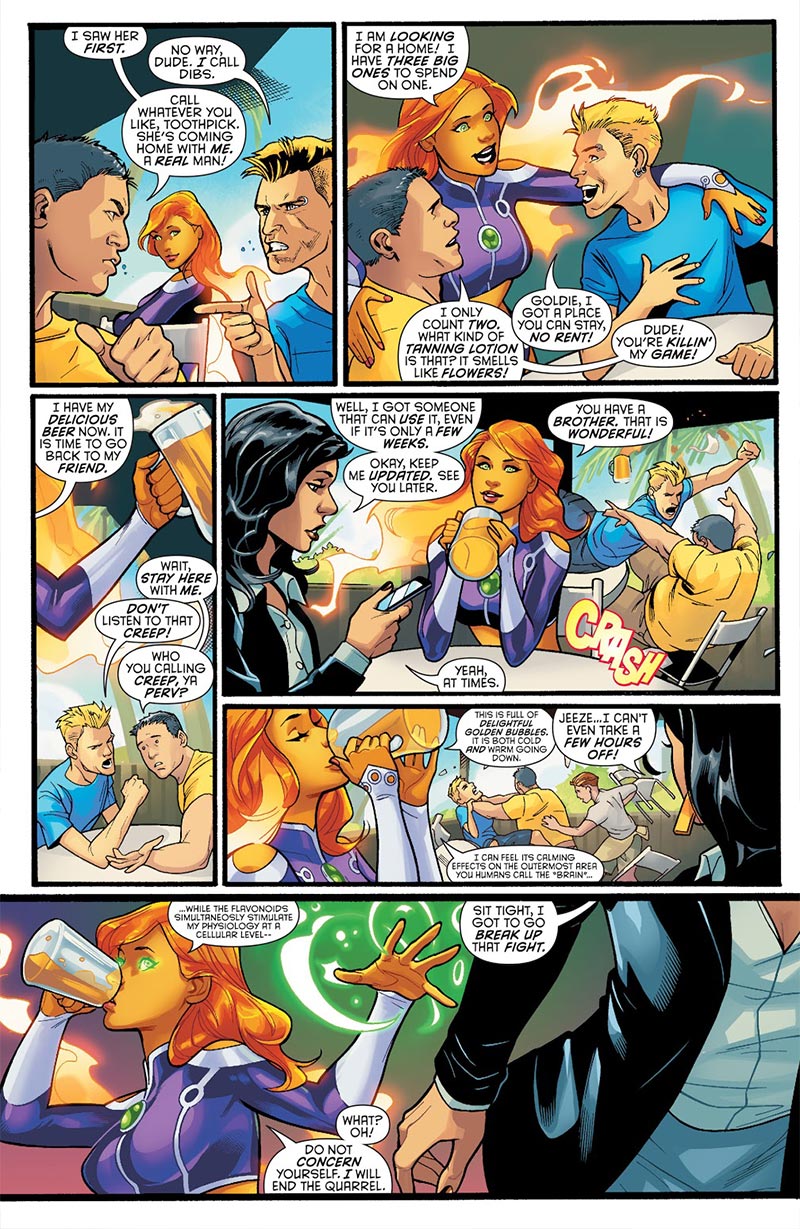 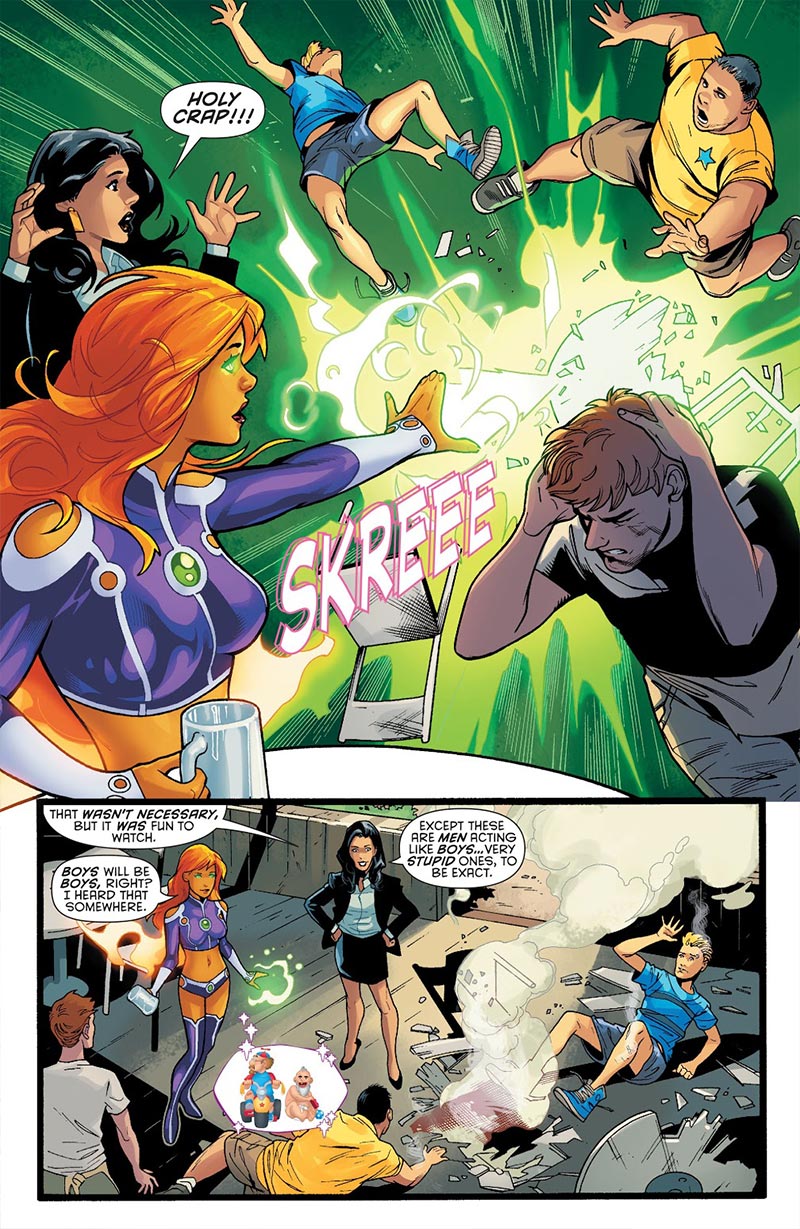 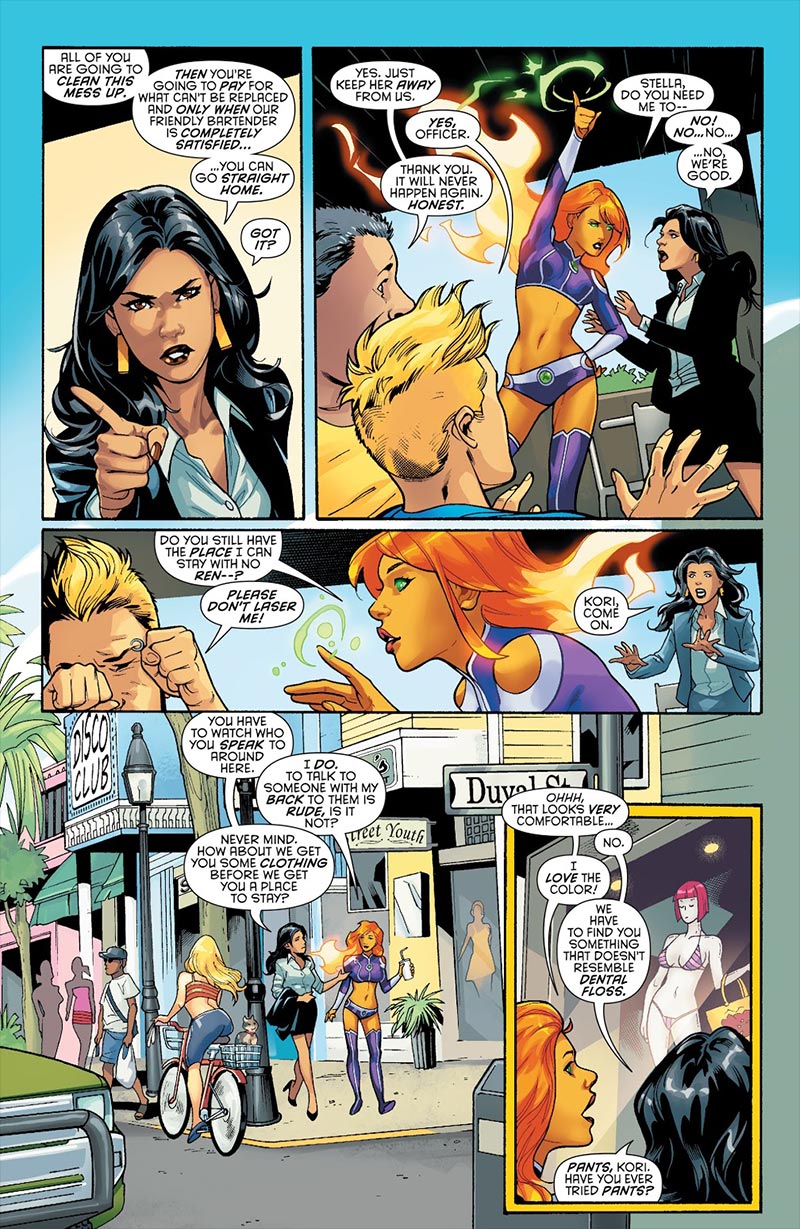 And I thought Wonder Woman was harsh!

Boosterphile Chris Aguinaldo was the first to tell me that All-Star Western writer Jimmy Palmiotti spilled the big news about his planned guest star in "Palmiotti Brings Superman to 'All-Star Western'."

CBR News: Although Superman's the character featured alongside Jonah on the cover, perhaps the bigger event was Gina bringing Jonah to the museum exhibiting his body. What was your process for designing the exhibit? The faux comic book covers were an especially nice touch.

Palmiotti: We thought it would be cool for Jonah to see the impact he made in his life -- good or bad, real or not, and have him process [the information]. The items in the exhibit are specific, and the actual stuffed Jonah is from a story originally told in the classic "Jonah Hex Spectacular," where we theoretically witness the end of Jonah's life. We have scrutinized that issue and plan on coming back to it later once the story moves from the current location. And, yes, Booster Gold will be in Issue 28 for those that love the character. Things will be moving quickly.

So, to recap: BOOSTER GOLD WILL BE IN ALL-STAR WESTERN #28!

The book will be released on February 26. You can read more about what to expect in the issue in Steve Sunu's full interview at ComicBookResources.com.

Thanks to Chris for spreading the good word.

Boosterrific [Official Comment] posted on Feb. 5, 2014 at 8:55 PM
Really? Not a single comment? Is the comment section broken again? I thought for sure someone would have something to say about this.

SuperPat posted on Feb. 5, 2014 at 10:10 PM
I need my Booster fix! It'll be the first New 52 comic I buy since the last time he showed up in All Star Western. Palmiotti handled him pretty well last time.

Boosterrific [Official Comment] posted on Feb. 5, 2014 at 11:01 PM
Whew. At least I know that the comment scripts aren't broken.

I hear you, Pat. I think it's funny that the only place DC seems to be able to work Booster in these days is ALL-STAR WESTERN. It sure seems like the New 52 is a smaller world than the post-CRISIS DCU.

All Booster Gold fans should take the time to wish Jimmy Palmiotti a happy birthday!

Palmiotti and his writing partner, Justin Gray, are the only writers at DC who have given Booster Gold anything to do in the DCnU in 2013. Maybe if we're really nice to him on his birthday, he will arrange for Booster to return to All-Star Western where we can all find out whether Booster and Jonah Hex can work out their differences. (If we're really, really nice, maybe we can get Skeets back in the Old West, too!)

So thank you, Mr. Palmiotti. May you have many more.

It is convention season, and as usual some interesting news pops up from time to time at convention panels. Take for example Steve Sunu's coverage of DC's Batman panel at HeroesCon 2013 for Newsarama.com:

[Jimmy] Palmiotti revealed bringing Booster Gold into "All Star Western" actually came from Dan DiDio. "We just started laughing," Palmiotti recalled of his reaction to the idea. "Dan's suggestion was also to bring Jonah into Gotham. He's the biggest Jonah fan I know. When he gets his chance to put in his two cents, we let him.... There was a Jonah Hex series in the future that was silly way back when and I said I'd rather write him now. Jonah's seeing people on cellphones, thinking girls who aren't wearing much are all hookers. The great thing is -- the thing that people don't know about Dan -- I don't know someone who has a bigger comic collection than Dan DiDio. We all have long boxes, but with Dan, you can actually make a hallway and furniture out of it. He's been really good for us -- at a time when Jonah wasn't selling much, he's always come up with an idea to get us just a little bit more. We even deal with that with 'All Star Western' now."

So there you have it, the reason why Jonah Hex got to keep a low-selling series after Flashpoint is because DC Co-Publisher Dan DiDio is a big fan.

If we want Booster back in his own title, we need to get a Booster Gold mega-fan into a corporate office. Hey, wait a second! What have you done for Booster Gold lately, DC Chief Creative Officer Geoff Johns?

Justin Gray must feel pretty loved right now. He was interviewed by both Russ Burlingame at ComicBook.com and Newsarama.com last week about All-Star Western #19.

Vanetta Rogers interviewed both Gray and his co-writer, Jimmy Palmiotti, for Newsarama.com. The focus of the interview is very much on Palmiotti and Gray's plans for the future of the series (which has been losing more than 500 readers each month for some time now, currently down to under 17,000 per month and fast approaching cancellation). But there was still some room for some Booster news.

Newsarama: How did All-Star Western end up being the spot where Booster Gold would return to DC Comics?

Justin Gray: We needed to shake things up. Booster is the only time traveler operating currently in the New 52, and his story is that of a man hurtling through time for reasons unknown. He's not fully aware of the reasons behind this and so it felt like a great opportunity to pair him with Jonah Hex in a way that would get people talking about All-Star Western.

Palmiotti: We constantly like to keep All-Star Western on the cutting edge story-wise and loaded with ideas that we think really challenge the characters. Getting to be the book that reintroduces Booster again was even cooler for us. Once again we get a chance to turn more people onto the book, and that is a win-win situation for us on all counts. The crew at DC and our editors have been working long and hard on making this happen for us and we think we have a story that lives up to any hype we might have out there.

Meanwhile, at the New Look ComicBook.com Russ Burlingame resurrected his "Gold Exchange" column to put some questions to Gray, who genuinely appears to be a big Booster Gold fan.

ComicBook.com: There are few characters more entwined with the DC Universe than Booster, at least as he's been depicted in the recent past. His future is totally dependent on the "history" that unfolds in our titles every month. Hex is at the other end of the spectrum; his life would be only minimally impacted if Superman never had his coming-out party. Do you think that makes an exploration through time with these two particular characters even more interesting than the average mismatched duo?

Gray: Hex takes everything as it comes with an angry scowl and hand on his gun approach. I think any time you put characters together that are dissimilar, with very pronounced view points, methods and ideologies that you're going to have a good time.

A lot of times you have such similarities in characters that they become swappable costumes. I believe Booster being around Hex actually makes him more heroic in ways that would be overlooked and sometimes overshadowed by standing in a crowd with other heroes. He is essentially the only pure hero in the book at this time.

In both interviews, Gray sidesteps questions of how Booster got to the past and where he will be going next. It looks like readers will have to pick up All-Star Western #20 next month for more answers!