Westfield Comics has posted an article detailing the origins of Booster Gold Volume 1 in advance of the reprinting of those issues for the upcoming Booster Gold: The Big Fall hardcover.

The article was written by Robert Greenberger, a former DC editor who worked on the Who's Who series. Greenberger spoke with Booster's creator, Dan Jurgens, for a first-person take on the occasion. Most of what was said will be familiar to long-time Booster boosters (much of it is corroborated by what Jurgens had previously told me in my Secret Origin interview) but it's always interesting to hear Jurgens speak of the old days at DC.

Jurgens pitched the idea to Giordano and was surprised at how quickly the series was picked up. "At the time, DC was a remarkably fun place to work," Jurgens recounted. "They were very, very open to new ideas and concepts. The company was committed to trying new things.

"I was at a convention in Dallas that Dick Giordano and Pat Bastienne were also attending. Dick was always highly encouraging and always said if I had anything in terms of a project idea, to bring it to him.

"We had breakfast before the Con started and I pitched him the basic concept of Booster—where he came from, what motivated him and what would make him different. At that point, I didn’t even have the pitch written out. I believe I had a preliminary sketch.

Booster Gold being born in Dallas makes perfect sense. There are few times/places more associated with American capitalism than Dallas, Texas in the mid-80s. (Booster Gold versus J.R. Ewing!)

Speaking of villains, Jurgens also admits to a lingering affinity for Dirk Davis. Maybe one day Booster's selfish agent will get a shot at redemption. Until then, you can relive his glory days in Booster Gold: The Big Fall when it is released this September.

Great minds think alike. No sooner had I finished writing Friday's bio on Dirk Davis than I clicked over to Ross Pearsall's delightful Super-Team Family Presents... blog and found that he's also got Booster Gold's agent on his creative mind. 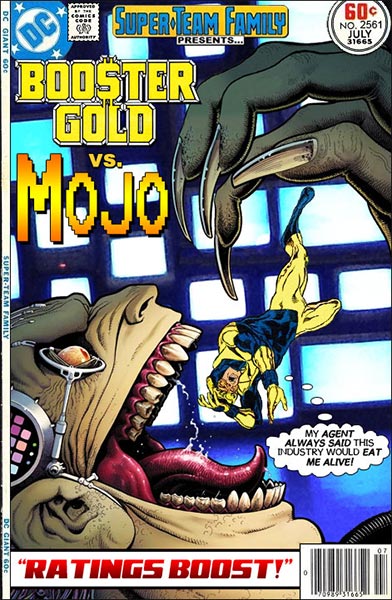 Mojo is an X-Men villain from another universe who, like Booster Gold, debuted in the mid-1980s as a commentary on American celebrity culture. In Mojo's case, he's a parody of a television network executive whose only desire is to get great ratings at any cost. In other words, he's a natural foe for popularity-obsessed a Booster Gold! 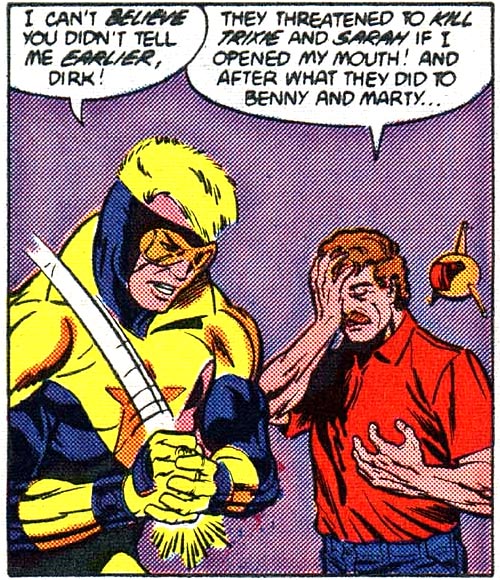 So Convergence is now over, and it represents a paradigm shift for our hero. We shouldn't be surprised; the first time DC tried a weekly, eight-issue event series, it, too, rewrote the book for Booster Gold.

By the conclusion to 1988's Millennium, Booster Gold was penniless and disgraced thanks to the machinations of his manager, Dirk Davis. It was revealed that Davis had all along been a sleeper agent for the evil Manhunters, and he had manipulated our hero into a corner. As a result, Booster lost his solo series and very nearly quit adventuring altogether.

Davis' personality was hard to nail down throughout Booster Gold volume 1. Some issues he was Booster's friend, and some issues he was in league with Booster's enemy or trying to steal Booster's girl. That might make readers wonder what creator Dan Jurgens might have intended for Davis if Millennium hadn't resulted in the series' cancellation.

Naturally, I put the question to Jurgens himself.

I was merely trying to write Dirk as a more complicated individual-- multifaceted, as so many people are. So, yes, he was a huckster. The MILLENNIUM crossover came somewhat out of nowhere and we were encouraged to use important characters as Manhunters. I plugged Dirk into that role as part of the story, but was never really thrilled with the concept of doing so.

In this case, it was more about the general notion that we use fairly important characters as the Manhunters. It was also thought that it would be more effective that we use someone who'd been there from issue #1, and I wasn't about to use Trixie.

When I would have started the series, there was no plan for Davis or anyone else to be a Manhunter because MILLENNIUM didn't even exist. All of it came later and in a situation like that, you do what you can do make things work.

Nearly 30 years later, Convergence reveals that DC is still flying by the seat of its pants. Would we want our comics any other way?

Boosterrific [Official Comment] posted on May. 29, 2015 at 8:30 PM
Glad to hear it, gio. It's nice to know someone other than me is enjoying these.

Herb posted on May. 30, 2015 at 8:36 AM
No surprise, but it's nice to hear Jurgens confirm what I've beloved all along regarding the Millennium storyline

One question I want answered is what was his plan for Broderick? The series ended before anything could be done with him, and I don't think Jurgens put him in our time frame without a purpose in mind.

It's always bothered me that he was forgotten 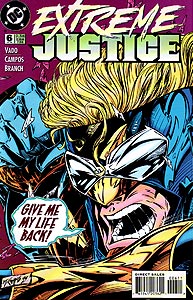