This Day in History: Encyclopedia Gold

As the first character introduced to the DC Universe after the events of Crisis on Infinite Earths, Booster Gold was too new for his own entry in the original Who's Who: The Definitive Directory of the DC Universe character encyclopedia. (Volume III: Black Lightning to Byth was cover dated May 1985, nearly a year before Booster's first appearance.)

While Booster would have to wait for the 1987 Who's Who Update to receive his own listing, Booster's impact on the DC Universe was felt much sooner. Therefore, Booster first appeared not in his own entry but in support of one of the DCU's more established characters (insofar as a seldom used star of a back-up feature in Superman's Girlfriend Lois Lane in the early 1970s can be considered "established").

If you look closely, you'll see our hero in the background of the entry for Rose and Thorn in Who's Who: The Definitive Directory of the DC Universe Volume 19, released 31 years ago today.

(The less said about Thorn's costume the better. Obviously Thorn and Batman and the Outsider's Looker shopped from the same designer label in the 80s.)

Whereas Booster went on to become an integral member of the Justice League International, Rose has rarely been seen in the decades since. Maybe it's time for Booster to return the favor.

Dick Giordano would have turned 84 years old today. If you don't know who he was, you should.

Giordano was the Managing/Executive Editor at DC Comics during the decade that saw Crisis on Infinite Earths, The Killing Joke, and Watchmen. Without him, there wouldn't have been a Booster Gold. Literally.

This is what Booster's creator, Dan Jurgens, had to say when I asked him about Booster's origin in 2010:

Boosterrific: You had not done a lot of work for DC prior to Booster Gold Volume 1. How was it that as a relatively inexperienced writer/artist, you were given such an opportunity as creating a new series for the mainstream DC Universe?

Dan Jurgens: Why was I allowed to do Booster? Well, I didn't make the decision but I do know this: When I first explained it to Dick Giordano and told him the basic idea of what the character could be and who he was, Dick saw him as someone who was entirely different than anyone else in the DCU. I think some of Dick's background as an editor, where he often handled somewhat offbeat characters, may have had something to do with that. But he was attracted to the book and as Managing Editor, gave me the thumbs up and approved the project. Sometimes younger, untested talent, will actually pay off with somewhat different ideas and concepts.

Giordano may have died in 2010, but his legacy lives on. Thank you, sir.

This Day in History: the Future

In the year 2001, mankind's freedoms were sacrificed for the sake of security by a tyrannical government that seized power after a well-planned attack on American soil. Thankfully, this kind of scenario could only happen in comic books.

On this day in 1991, DC Comics launched their summer crossover series Armageddon 2001. The book was created by an all-star cast: written by Archie Goodwin and illustrated by Dan Jurgens and Dick Giordano. However, it is far more famous for the illogical resolution to its story, which DC changed at the last minute due to the conclusion being leaked to the public. In the non-stop media-hype of the 21st century, that action seems rather quaint in hindsight.

The setup for the story revolved around the mystery of which DC hero betrayed the rest to become a world-dominating tyrant. A time-traveler from the future makes it his mission to investigate the heroes of the 20th-century in an attempt to forestall his own horrible fate. Naturally everyone was a suspect, including Booster Gold. 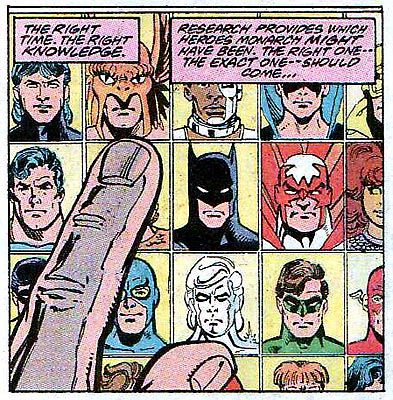 Honestly, Booster plays only a small part in this story and probably then only because Jurgens was the artist. Perhaps it was too far-fetched an idea that foolish Michael Jon Carter would one day wield the power to control the world. More likely, it may have been impossible for readers to believe that an egomaniac like Booster Gold would rule hiding behind a mask.

Despite Booster's tangential involvement, the story is actually quite entertaining. Betrayal and the temptation of power are themes regularly investigated in super hero comics. This story simply takes those themes to a logical extreme and with the addition of time travel, provides a frame story that allows the creative teams of the era to incorporate the crossover event into their series in organic and entertaining ways.

If you can get past the tragically unsatisfying ending, this 2001, like the year itself, is worth a second look.

A character whose history is even more confusing than the GREAT Rip Hunter himself. Was Skeets/Mr Mind REALLY wearing his skin in 52? Ewww

Dick Giordano died this past Saturday at the age of 77. Although Giordano's direct impact on the published adventures of Booster Gold is comparatively small, his indirect influence on the character's legacy, and the comic book industry in general, is immeasurable. For whatever else he has done, and did more than any brief tribute could hope to mention during his nearly 50 years in the business, Giordano deserves credit for bringing Blue Beetle into the DC pantheon, paving the way for the enduring antics of Booster Gold and Blue Beetle. Thank you, Mr. Giordano. [You can find the reminiscences of several artists, including Dan Jurgens, on Dick Giordano at Newsarama.com.]