I make no secret of the fact that I enjoyed Dan Vado's time writing Justice League comics, including Extreme Justice. It's also no secret that I'm not quite such a fan of the art of Vado's frequent collaborator, Marc Campos.

To be fair, I'm a Booster Gold guy, and Campos' time on the character coincided with Booster's infamous football armor. It was not a golden era.

I'm perfectly willing to accept that fans of other characters may have enjoyed Campos' work a little more than I did. In fact, one of them recently sent me an email looking for help tracking Campos down.

Love your site! I was just wondering if you happened to know contact info for Marc Campos?? I have been wanting for years to get a Blue Beetle commission from him!

I'd like to help, but sadly, I have no idea how to reach Mr. Campos. All I know is that back in the day, he worked out of Brazil (and presumably still does).

Can anyone be a hero and point us in the right direction to contact Campos? If so, leave a note in the comments, and I'll be sure to pass it along.

If you followed the adventures of Booster Gold in the mid-90s, you must be familiar with the work of Dan Vado. Vado was the writer who gave Booster his first suit of bulky 20th-century power armor in Justice League America #80, cut off his arm and killed him (temporarily) in Justice League America #89, then restored what remained of the fortune Dirk Davis had stolen in Extreme Justice #6. 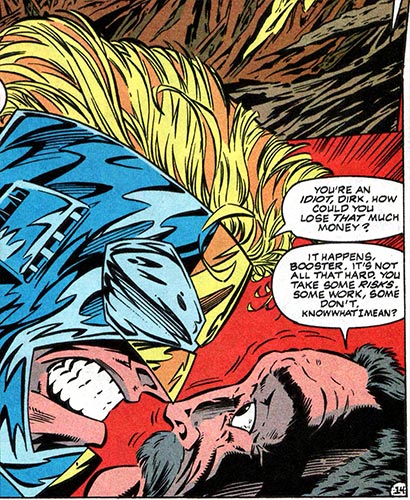 Vado's time writing the character is often overshadowed by the, um, "extreme" art of the era. That's a shame. Vado's writing strongly emphasized the troubles and personalities of the characters in the ensemble cast. Yes, it's all a bit melodramatic, but that was always a component of the International era of the Justice League. Extreme Justice might not have a sterling legacy, but it's really pretty good if you can read it with your eyes closed.

This Day in History: Skeets is Here?!

On this day in 1995, Booster Gold and Skeets were reunited in Extreme Justice #4.

I'd love to tell you it was a touching reunion between two old friends, but I'd be lying. Skeets appears in exactly three panels. The Blue Beetle's new Bug gets more attention. Heck, Mister Miracle's sidekick Oberon gets a bigger part, and Mister Miracle isn't even in this issue.

As you know, Extreme Justice has something of a reputation as the bad seed among the Justice League International-era titles. Honestly, this book won't do much to disabuse anyone of that opinion.

The story is little more than standard, soap-opera style melodramatics. Extreme Justice plots are typically like Hollywood action movies: big, loud, and dumb. Ironically, writer Dan Vado's strength isn't the action but the character development through interpersonal relationships. You might think that would make this reunion issue a success. You'd be wrong.

This is not Vado's best work. The action crowds out significant character development. Captain Atom is callous, Maxima is insane, and Firestorm, a former member of the "Satellite Era" Justice League, is a spoiled child. Amazing Man is shoehorned into a role best filled by Captain Atom, as though Vado was struggling to find a niche for his own character to fill.

If Vado's character development is typically the strongest part of Extreme Justice, the art is always its biggest weakness. This issue is no different, as guest artist Mozart Cuoto and inker Ken Branch combine to create panels with wildly inconsistent characters and hard-to-follow action. Unsatisfying is probably not a strong enough word.

So, as I said. Extreme Justice #4 features the reunion between Skeets and Booster Gold after several months apart. While we are still hoping to see Booster Gold and Skeets reunited in the New 52, we have to hope that it will be better than this.