Blue Beetle: Rebirth #1 is out today. It features the return of Ted Kord as the mentor to Jaime Reyes. You can find two previews online at comicbookresources.com and majorspoilers.com.

On a related note, DC Comics released solicitations for comics shipping in November earlier this week. As has become the norm, Booster Gold was nowhere in sight.

Could a future issue of Blue Beetle be where we'll next see our hero? Given that the series is written by Keith Giffen, it seems a possibility. Consider picking up this issue and getting in on the ground floor.

DC has released solicitations for the first month of their rebirth project. You will not be surprised that there is no mention of Booster Gold coming to the DCnU. (I assume that's still what we're calling current continuity. Some of the solicitations seem to imply that despite what we learned about the multiverse in last year's Convergence, the old DCU is truly, definitively dead. I guess something needs to die before you can have a "rebirth.")

Anyway. DC hasn't entirely forgotten about Booster Gold. He is slated to appear in one new trade. Per the solicitation from ComicBookResources.com:

SUPERMAN AND THE JUSTICE LEAGUE OF AMERICA VOL. 2 TP
Written by DAN JURGENS
Art by DAN JURGENS, RICK BURCHETT, SAL VELLUTO and BOB SMITH
Cover by DAN JURGENS and RICK BURCHETT
The Man of Steel has died! Falling at the hands of the monster Doomsday, the Justice League's most powerful member is now gone, and along with killing him, the creature grievously injures Leaguers Blue Beetle, Booster Gold and more! How will the Justice League re-collect in this moment of crisis? Who will be the newest members? And how will they deal in a world without Superman? Learn all the answers in these tales from JUSTICE LEAGUE AMERICA #69-77!
On sale AUGUST 31
240 pg, FC, $19.99 US

So there is that. If you weren't reading comics in 1992, you could do much worse than this collection of stories about the world without Superman. Plus, you get to find out what the deal was with Bloodwynd. As an added bonus, you get to see the return of Skeets and a powerless Booster Gold backhanded by a demon! Hooray!

You have to admit, it's better than nothing. 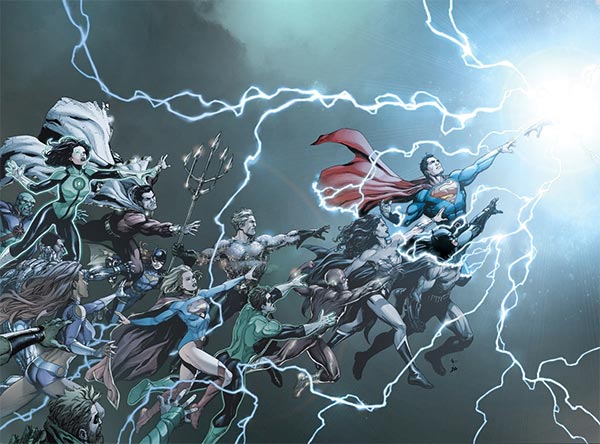