Happy Halloween! To celebrate the holiday, we DC comic book bloggers are banding together to give you what you want most: reviews of DC's "Ghosts" annuals from 1998! (What's that you say, you'd rather see more pics of hot chicks cosplaying? Hey, it wouldn't really be Halloween if we gave you what you really wanted, now would it?)

While Booster doesn't actually appear in any of the 1998 annuals, that's not going to stop me from joining in the ghoulish fun. Booster has encountered spiritual apparitions of the undead, including the time he led the Super Buddies to Hell to recover Ice in 2005's JLA Classified #6 and 7! 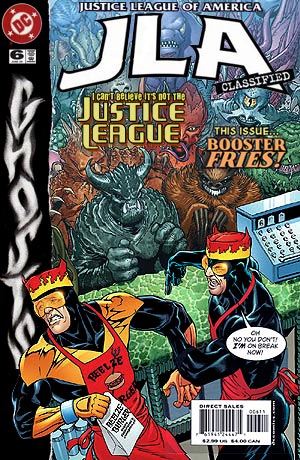 Arguably, nothing about his time with the Super Buddies represents any of Booster's finest moments. Because Blue Beetle had something of a makeover in recent appearances in L.A.W. and Birds of Prey, Booster is used as comic relief and scapegoat for the duo. We Booster-philes may chafe at seeing Booster playing the fool, our raw feelings should be salved by the fact that he's doing it in support of his best friend. 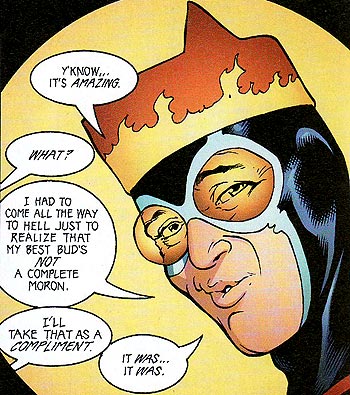 Booster himself is surprisingly resilient to finding himself in Hell. This could be a psychological defense, or perhaps Booster is truly an atheist (as he himself stated as part of a punchline in 1988's Justice League International Annual #2). In any event, he remains skeptical when his friends encounter the apparition of their long-dead teammate, Ice (who died in 1994's Justice League Task Force #14). 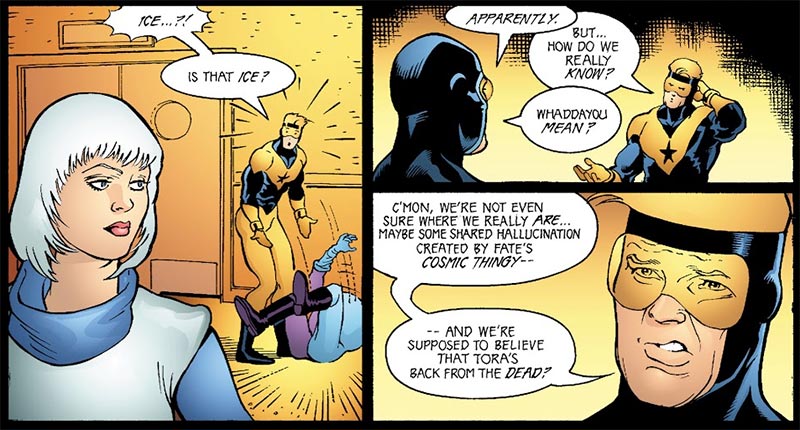 Is she Ice, or isn't she? Is the team in Hell, or isn't it? The answers to these questions aren't immediately clear, and that very uncertainty is key to the psychological insecurity at the heart of this ghost story. No matter how you think about it, you don't have the answers. That's not a very comfortable position for anyone, much less heroes who are required to make split-second decisions with lives in the balance.

Published over a decade after their best work on Justice League International , this issue's mix of humor, action, and psychological drama is indicative of the best works of co-writers Keith Giffen and J.M. DeMatteis. If you like your super-hero comics not to fit within any easily definable genre, you'll find something to love in this issue.

If you're looking for something else spooky to pass the time on today, try something from one of these 17 other scary DC bloggers:

Thanks to Chad Bokelman of corpsconjecture.blogspot.com for putting this crossover together.

Chad Bokelman posted on Nov. 5, 2012 at 9:57 PM
"Booster was just blowing off some steam when things got out of hand, and he accidentally wished the team to Hell."

You know, it's comments like this that remind us just exactly what medium of media we're obsessed with. lol Fantastic write up. Boosters always been a bit of a mixed bag for me but this seems pretty entertaining.

Thanks for participating in the cross over! I was stoked to have you aboard! Maybe we can do it again sometime!

Arthur Canning posted on Dec. 1, 2012 at 2:03 PM
Good Show
I have a buddy who adores Booster - as a result I've discovered lots of fun moments with the character, and some good writing too - great in Justice League Unlimited and Smallville..
This was a funny post, and was glad to be part of our Halloween crossover.
Cheers, Artie