This weekend The Blot asked me for a Booster Gold 30th Anniversary badge so that he could promote Booster Gold on his website, TheBlotSays.com. That got me thinking that maybe I should make one for everybody. 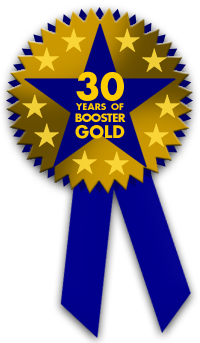 So there you go. Steal that image and post it somewhere you think it will remind people of the awesomeness of Booster Gold, even if that place is just your own desktop.

Let's Get This Party Started

Yesterday I let Superman have his fun, but now it's Booster's turn.

If you refresh your browser cache and look at the header above (or the background on the sides), you'll see that I've rolled out a new dress for Booster Gold's 30th Anniversary. Yup, that's right. Whoo-hoo! Booster Gold is now an "established" super hero.

Booster Gold #1 was released on November 21, 1985 with a February 1986 cover date. He was the first character introduced into the post-Crisis on Infinite Earths DC Universe, which DC is celebrating with Convergence. So we Booster Gold fans are going to celebrate, too. We'll start the celebration now and let it run until February of next year.

(And lest you think the 30th anniversary is an odd number to celebrate, I remind you that in 1992, Marvel Comics pulled out all the stops to promote Spider-Man's 30th. Reminders were printed wherever possible, and the web-slinger even got a bunch of his own hologram covers. If it's good enough for Spider-Man, it's good enough for Booster Gold!)

I've already declared 2015 the Year of Booster Gold, and I hope that DC will join in the celebration with some great new Booster Gold stories in coming months. Booster will be appearing regularly in Justice League 3000 and will play some role in April's Convergence, including his own two-issue tie-in series. That sounds like a pretty good start to what we hope will be a great year.

How are you going to celebrate Booster Gold's 30th Anniversary?