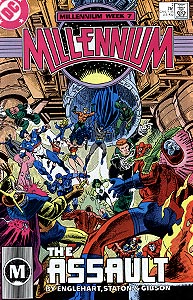 Issue Notes: This is the key book in the seventh week of the two-month long Millennium crossover event.

Page 11, panel 6
Booster Gold does not seem pleased to hear the news that should the Manhunters lose their citadel to the assembled heroes of Earth, they plan to blow up the entire planet. Based on this news, Booster volunteers to lead the Manhunters who will guard the bomb. For some reason, the Grandmaster lets him.

Page 20, panel 1
SPOILER WARNING!: When a Manhunter reaches to activate the device that will destroy the world, Booster turns traitor on the Manhunters and joins the heroes against them. It is unclear whether Boosters actions have been planned all along, or whether he is merely acting opportunistically, changing sides again when it becomes apparent that the Manhunters mean to destroy the Earth. Reveal

Page 20, panel 4
As the battle turns against the Manhunters, the heroes are joined by a secondary team composed of Aquaman, Batman, Doctor Midnight, Hourman II, Jade, Mister Miracle, and Wonder Woman. This is Booster's first meeting with both Hourman and Wonder Woman.

Page 21, panel 4
BOOSTERRIFIC! COUNT: 7. As the battle concludes, Booster uses his own catchphrase to congratulate the heroes on a job well done. This is the first time that his catchphrase has been used in a book other than his own title.

Page 21, panel 6
Booster is offended that the Justice Leaguers would even think that he was a mercenary who changed sides in the conflict based on the odds. While Booster may not lack for conviction, he does lack for evidence. Black Canary and Blue Beetle take him into custody.

Page 22, panel 3
Booster appears on panel with the victorious heroes, including Aqualad, Infinitors Brainwave II and Nuklon, Green Lantern Driq, and Harbinger, none of whom he met before. However, Booster is technically being treated as a prisoner of war and has little opportunity for communicating with them.

Page 23, panel 5
SPOILER WARNING!: Frustrated at his treatment and recent events in his life, Booster abducts Xiang Po, one of the Oans Chosen in order to "show Xiang just how rotten this world really is!" Reveal

Boosterrific Review: Nearing the finish line, this issue was headed towards greatness before it veered into the insanity of terrible characterization. Most likely, someone at DC felt that the story needed a concluding coda, and as a result this issue is cheated of its deserved happy ending in favor of a poorly-explained cliffhanger as a means to extend the story one more issue. Still, this action-filled comic is probably the best issue of this mini-series.