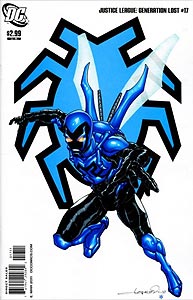 Cover Description: There are two covers to this issue: the standard cover by Aaron Lopresti is a pin-up of Blue Beetle. The 1:10 variant cover by Kevin Maguire features Power Girl in battle against Blue Beetle, Booster Gold, Captain Atom, Fire, and Rocket Red.

Issue Notes: Tie-in to Brightest Day. This is the first issue of this series that does not feature the "Brightest Day" promotion on the standard cover.

Page 3, panel 6
Power Girl has been very busy. Since her appearance in the previous issue, she has consulted with Batman and the Justice Society, as well as travelling to Vietnam and battling Project Cadmus as seen in two of her monthly issues. In the meantime...

Page 4, panel 2
...the Creature Commandos and the new Justice League International continue their battle outside the Justice League Headquarters in the Great Australian Desert for the third straight issue. This battle is becoming epic, and it certainly makes the reader wonder why no other heroes have gotten involved yet. Booster Gold still enjoys the luxury of an impenetrable force field as he commands his teammates, Captain Atom and Rocket Red, in battle. For the first time since the Commandos attacked, Skeets is seen amidst the action.

Page 5, panel 2
POWER UP: Thanks to his impenetrable force field, Booster easily survives a surprise attack from the Frankenstein's monster-like Patchwork. The force of Patchwork's strike is strong enough to damage the ground around him through a pressure wave generated by the force of the impact. Fortunately, Booster's force field is strong enough to negate that tremendous force when it is struck...

Page 6, panel 4
..but also flexible enough to allow the transmission of lesser vibrational force when Patchwork speaks. Otherwise Booster Gold would not be able to have a conversation with Patchwork through his force field. Like Patchwork's punch, Sound is a pressure wave that is capable of great force, including triggering seismic activity.

Page 8, panel 2
A "Coke" machine is seen in the background of the United Nations building in New York City. While Soder-Cola is the number one soft drink in the DC Universe, it's good to see that DC citizens still have a choice with this rare, real-world product placement.

Page 9, panel 2
Booster reveals his poor bedside manner (and a rare bit of poor leadership skills) as he catches up with Fire and Ice. Cut Fire a little slack, Booster; she was mostly dead in the previous issue, after all.

Page 10, panel 1
The relative power inequity between the Creature Commandos and the new Justice League International resulting in a three-issue battle is explained away as Velcoro and Patchwork explain that they have been "altered" since their last appearance.

Page 17, panel 2
The JLI arrives at the JLI Tokyo embassy in search of Blue Beetle. For having rescinded their support of the Justice League in 1995, the United Nations has been very generous in keeping the old international embassies around. Note the second "Coke" product-placement in this issue on one of the many billboards in this fantasy-inspired Tokyo skyline.

Page 17, panel 3
Skeets calculates that the JLI can search 8.8 square miles per hour. But who said that Max is hiding within the city limits? Metropolitan Tokyo is nearly 5,000 square miles with a population near 40 million. It would take the JLI 24 days to cover that area at the same rate.

Boosterrific Review: Slow-paced by the standards of this title, Winick gets a lot of mileage out of this issue as two of the stories many plots are drawn together. A lot of subtle storytelling is expertly squeezed into Joe Bennett's panels, but this creative storytelling seems to come at the price of unsavory panel shapes and placement on several pages -- especially during the fight scenes. The dynamic panel placement isn't detrimental to reading the story, but it is noticeable and a little distracting following the more traditional layout of the previous issue. This is the first time in this series that I have had cause to miss Keith Giffen's layouts.