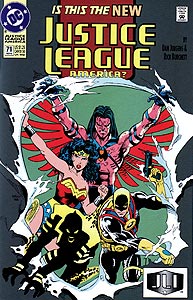 Brief Synopsis: Following the aftermath of the battle with Doomsday, the Justice League overhauls its membership.

Page 4, panel 2
POWER DOWN: Oberon delivers the bad news to Booster Gold that his Mark I costume is irreparable by twentieth-century technology. This is the second time that Booster's costume has been destroyed via the actions of a villain (see Booster Gold, Vol. 1, #12). Previously, his suit was repaired by Dr. Jack Soo of S.T.A.R. Labs, though Booster had to return to the future to recover a means to power the repaired suit.

Page 5, panel 5
Booster drops by to check on the condition of Blue Beetle II. He is informed by the attending physician that Beetle's coma is worsening. Booster's "Bold's Gym" sweatshirt is clearly inspired by the real chain of fitness centers Gold's Gym founded not by Booster, but by Californian Jim Gold.

Page 16, panel 5
PRODUCT PLACEMENT: Adding insult to injury, Fire notifies Booster that she has burned every single copy of the revealing lingerie calendar that he had made with her photographs from Justice League America #67, destroying Booster's chance at turning a profit on the venture. As Fire delivers the news, she appears to be wearing a very revealing thong and cut-off t-shirt. (Talk about mixed signals.) Her skin has been colored green, theoretically to represent a skin-tight leotard and possibly to appease the Comic Code Authority. (Though it could be a straightforward error by the issue's colorist.)

Page 17, panel 4
POWER UP: Booster reactivates his robot sidekick Skeets. This is Skeets' first appearance in a Justice League comic book. Skeets has apparently been repaired since he was damaged by the Linear Man in his last appearance in the "Time and Time Again" storyline in The Adventures of Superman #476. Skeets holds no ill-will against Booster for his prolonged deactivation.

Boosterrific Review: Recruiting issues are always by their very nature somewhat disjointed, and this is no exception. Following the loss of some familiar faces, the recently relaunched League is suddenly recruits Agent Liberty, Black Condor, and the Ray, characters that seem second tier even by Justice League International standards. Combined with some overtly sexual and bizarrely-colored nudity, this issue seems to be a grab bag of questionable ideas laid out in random order. This comic isn't terrible (Skeets!), it just feels that way following some great recent stories.