Cover Description: From left to right, Martian Manhunter, Wonder Woman, Captain Atom, and Firestorm reproduce the famous pose of the flag-raising on Iwo Jima as they struggle to raise the United Nations flag while a space battle continues on the background. (No Booster Gold.)

Brief Synopsis: The heroes of the DC universe, led by Captain Atom, combine forces to halt the Dominion organized Alien invasion of Earth.

Issue Notes: This is the second of three books in the Invasion! crossover event. 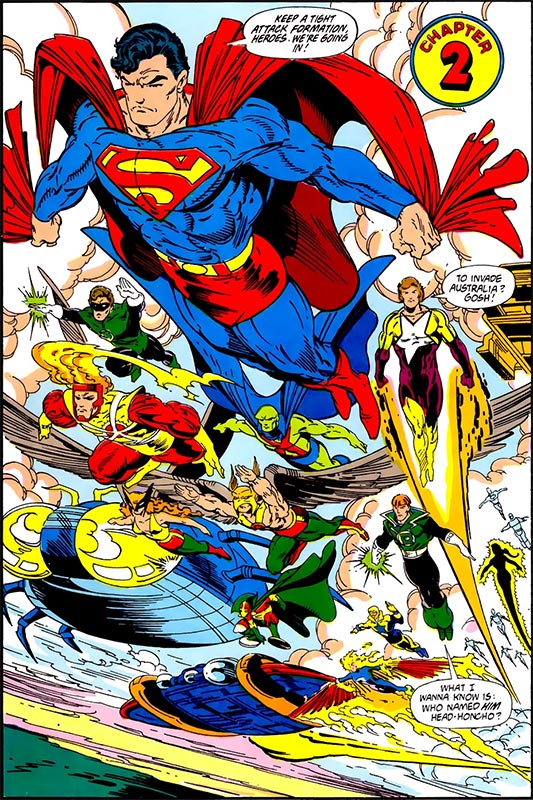 Boosterrific Review: By assembling their forces and facing the assembled Alien Alliance, the heroes of Earth provide a compelling if familiar story of mankind's resolve against impossible odds. Though there will no doubt be many who disagree, this issue would be drastically improved without artist Todd McFarlane's clownish and wildly inconsistent pencils.

(1 vote)
Jonathon (Mar. 30, 2010, 11:40:23)
Thank you, thank you, thank you for calling a spade a spade! I've never liked Todd McFarlane's pencil work despite so many fans just eating it up. Maybe his forte is toy design, because his depiction of DC's superheroes leaves me cold. On the bright side, Invasion also featured the artwork of Bart Sears, which helped.