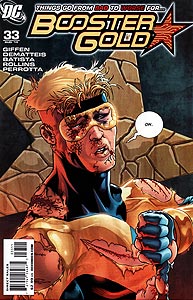 Cover Description: Booster Gold, beaten and bloodied, gives a thumbs down. This cover intentionally echos the more upbeat cover of the previous issue.

Brief Synopsis: Booster Gold travels through time for proof of the existence of Maxwell Lord.

Issue Notes: Andy Helfer, editor of the original run of the Justice League International is mentioned in the issue credits, though he is not credited for his involvement of this issue. Crazy credits such as these have been a trademark of the involvement of the writing team of Giffen and DeMatteis and their comedic Justice League International series.

Page 1, panel 3
SCHOOL'S OUT: Rani has drawn a pony on Rip Hunter's infamous blackboard. Rip mistakes the drawing for a sign of chaos in the timestream, playing on the audience's expectations for the writing that appears on his chalkboard.

Page 2, panel 1
Booster Gold and Skeets find themselves battling a rampaging Scottish giant named Brigadoom. The giant's name is a pun on the fantastical, titular Scottish village of a 1947 musical play by Lerner and Loewe.

The location of this battle is unspecified, though it is assumed to be Phoenix, Arizona. Booster Gold, Volume 2, #40 makes it clear that this battle is intended to take place in Metropolis. Within the DCU, the international SunDollers Coffee franchise is spelled with an "e," not an "a," except in the cities where franchises mysteriously appeared following the Infinite Crisis (as revealed online by The Daily Planet [see 52: The Website for details]). These cities are Gotham City, Metropolis, Miami, New York, Phoenix, and Star City.

Page 3, panel 2
Skeets is very concerned by Booster's use of the word "damned," a mild profanity that may be objectionable to Booster's audience. Some linguists may argue that in this particular instance Skeets misuses the word "expletives" as an euphemism for the word "profanity," since in this case Booster has used the word as neither an exclamation nor an empty adjective (though Booster had clearly done so in earlier panels).

Page 3, panel 4
A little obscure? Oscar Levant was an American songwriter and actor known for his quick, acerbic wit. Levant made few public appearances after the mid 1950s, and he died in 1972, over a decade before Booster Gold returned to the 20th century.

Page 4, panel 4
MEET THE PRESS: Mark your calendar: in a rare occurrence, Booster refuses to grandstand for the press.

Page 5, panel 4
Booster meets Cyborg in a Sundollar Coffee shop [spelling error previously noted above]. Booster is only present for a cup of coffee, but what is Cyborg doing there? Apparently heroes need their morning coffee like regular working stiffs.

Page 7, panel 3
Maxwell Lord was resurrected in the pages of Blackest Night #8.

Page 7, panel 6
Booster's missing injuries from Justice League: Generation Lost #2 retroactively explained! Booster was apparently taken to a 28th-century hospital for treatment. Since hospitals in Booster's native 25th century have been shown to mend broken bones in minutes, a 28th-century hospital could be expected to cure similar wounds in between panels!

Page 9, panel 5
FASHION ALERT: Hooray! Rip Hunter appears to be holding Booster's original, Mark I uniform in his Arizona Time Lab. The original costume was destroyed at the hands of Doomsday in Superman, Volume 2, #74. At the time, Booster had no way of traveling to the future to repair it. Rip Hunter, on the other hand, has endless access to future technology. 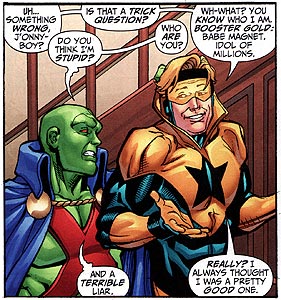 Page 11, panel 6
A PAIR OF DOCS?: It takes Martian Manhunter mere seconds to realize that Booster Gold is out of place. Manhunter omits from his list of reasons that Skeets, who never interacted with the original Justice League International, has changed shape. This meeting takes place sometime between Justice League International #8 and #14, most likely immediately prior to issue #14.

Page 12, panel 2
Booster's conversation with Manhunter is interrupted by Guy Gardner on his way to see a movie called Darla Does Detroit, clearly a reference to the pornographic Debbie Does... series of films. "OdorRama" was a scratch-and-sniff promotion used for the 1982 Jon Waters film Polyester, and was intended as an homage "Smell-O-Vision," which like "3-D," was a gimmick introduced to entice movie-goers to theaters in the mid-1950s as a response to the proliferation of television.

Page 13, panel 1
Tivo is a brand name digital video recorder, capable of recording and playing back live television without the use of tapes. Tivo was introduced in 1999, years after the dissolution of the Justice League International.

Page 14, panel 2
Booster Gold has a poster of the New York Jets logo hanging on his bedroom wall. This is the first indication of Booster's loyalty towards any particular professional football team in the 20th century. The logo shown was discontinued by the Jets in 1967. 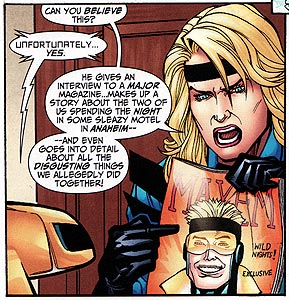 Page 15, panel 5
EXTRA, EXTRA: Booster appears on the cover of the Maxem Magazine held by Black Canary. This is clearly an allusion to Maxim, a popular men's magazine commonly criticized for objectifying women as sex objects. Maxim was first published in 1998.

Page 17, panel 2
Booster Gold runs into Maxwell Lord, who expresses concerns over Booster's behavior. At this point in history, Maxwell Lord had not yet acquired his mind-altering powers.

Page 17, panel 5
Skeets expresses the principal of Relative Time Travel. For more information about the various principals of time travel at play in the DC universe, see here.

Page 17, panel 6
Skeets compares himself to Jiminy Cricket, the voice of conscience for the marionette given life in the 1940 Walt Disney movie Pinocchio. Jiminy Cricket's big scene is the singing of...

Page 18, panel 1
..."When You Wish Upon A Star," a song used as an enduring icon of The Walt Disney Company, heard at the beginning of a majority of the Company's television shows and movies.

Page 20, panel 2
When Skeets sees a media center filled with video tapes, the first thing that he thinks of if pornography? Someone needs to check his programming.

Page 20, panel 3
The Himalaya Range of South Asia is home to the largest mountains in the world, including Mount Everest and K2.

Page 22, panel 2
Now inanimate objects are a part of Solidified Time and cannot be dislodged from their original time. Booster may have known this, but it is news to the reader.

Boosterrific Review: A satisfying return to the days of the Justice League International that pays tribute to the past without dissolving into rose-tinted nostalgia. Giffen and DeMatteis maintain their momentum on the book, squeezing an incredible amount of story into just 22 pages. And if nothing else, this book must be celebrated for the return of the high collar!

(7 votes)
Gregory A. Swarthout (Apr. 6, 2011, 18:35:48)
The "humor" is still painful and characterizations thin as tissue paper.
ncllcn (Aug. 20, 2010, 00:19:47)
Good issue. 'Boppy' sure was scared at first to see the pony on the board and the butterfly almost made him crap his pants, surely it brought back memories of Mr. Mind. Cyborg's lucky Booster didn't smack him like his name was Brigadoom. The JLI parts were done well. Enjoyed seeing Martian Manhunter and Booster together again, it only made me wonder if J'onn will pop up in JL:GL, I hope so. Giffen and Dematties are putting my doubts to rest, hope they keep up the good work. Oh and Rip looking like Rani's grandfather cannot be a coincidence, at least I don't think so.
Fatastar (Aug. 12, 2010, 18:00:07)
Overall, very good. I loved the way Booster reacted to things in the past. I wonder if Rani really did draw the butterfly smile? I like how Rip completely fails to use language Rani can understand, and how both men interact with the small thing. I wonder if the eye colour change for Rani is permanent?
Erin (Aug. 6, 2010, 15:43:16)
Generally entertaining although I do have to wonder why we keep having potty humor. I felt the best parts were in the present and in the time lab. Booster defends the JLI yet he still struggles with coming to terms with Maxs' betrayal. Something most writers seem to skim over. The scene with Booster and Rip makes me question whether Rip was really mindwiped but I liked the support he shows Booster. I enjoyed most of the past interactions Booster had with the exception of Black Canary. Good development and some rather cheesy jokes.
KMD (Jun. 21, 2010, 16:56:31)
A good issue and a fun reminder of the old days of JLI. I wish there was a bit more action in this one though the scene at the start with Brigadoom was fun.
Harry (Jun. 12, 2010, 22:23:02)
I really did enjoy this issue. It was a wonderful character study of my favorite hero and his relationship to a major villain in the DCU. Depending how this plays out, I might have to reconsider who Booster's "arch-nemesis" is. However, this issue has no action and probably has little appeal to non-committed Booster fans. Is this enough to keep the title afloat? Is it cancellation proof for the next couple of years? However, those invested in the title should not be disappointed with this issue.
Superman (Jun. 11, 2010, 14:36:32)
Keith and J. M. fight back for the JLI! The Booster Gold title is now simply dealing with the details; Generation Lost is the main Booster book at this moment, for better or for worse. But somehow being relegated to the back seat may do the title a lot of good, as this issue suggests; relieved of the pressure to be taut and high-octane, like Generation Lost obviously aspires to be, Keith and J. M. crafted a strong, touching story on Booster's relationship with Max. The writers should be commended for what they're setting up to do; namely, for reconciling up Max's actions in Infinite Crisis and his old, well-intentioned self in the JLI books, something we should note people explained away as just the result of *lamest and laziest of all reasons* a Superboy punch.