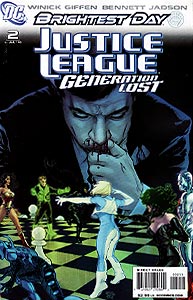 Page 2, panel 1
The video seen in the monitor shows Wonder Woman killing Maxwell Lord as seen in Wonder Woman, Volume 2, #219. The footage was recorded by Brother I and broadcast to the world in order to damage Wonder Woman's reputation. It did. A similar scheme is enacted by Brother I'd programmer, Maxwell Lord, in this issue.

Page 3, panel 1
Superman excuses himself to rescue an oil rig in the Pacific Ocean. This excuse is topical, and is what passes for social commentary in an average super hero comic book. A month before this issue was published, an oil rig had exploded and sunk in the Gulf of Mexico, creating an unprecedented ecological disaster. In the real world, there has been no Superman to save the men who died in the explosion or mitigate the resulting devastation to ecosystems along the Gulf coast.

Page 5, panel 1
Skeets claims that he contacted "as many Leaguers as I could." It is implied that the signal only went to Justice League International members, of whom precious few remain. Other than those currently present, only Animal Man, Blue Jay, Doctor Light, Flash I, Flash III, Green Lantern Guy Gardner, Green Lantern Hal Jordan, Maya, Metamorpho, Power Girl, and Ray survive as active super heroes from the days of the United Nations-sanctioned Justice League International. Certainly, most of these heroes would no longer be anywhere near a JLI signal device, and some may not respond should Booster Gold call.

Page 5, panel 3
A note about the art: the four remaining heroes who remember Maxwell Lord all wear skintight suits. The 2 women have well defined buttocks, while the 2 men have no ass crack at all. This inconsistency between the depictions of the sexes is hardly new to super-hero comics that are generally drawn by men and sold to men. However, for some reason this is distracting in the art of Joe Bennett/Jack Judson, probably because of a preponderance of worm's-eye views of the male heroes' exceptionally shiny metallic rears.

Page 6, panel 1
FASHION ALERT: As Booster speaks to Batman in the Batcave, the disappearaing/reappearaning star on Booster's back is back again! Last seen in Booster Gold, Volume 2, #30, the star is not typically a part of Booster's costume, despite having made off-and-on appearances since Booster's time in the Justice League International. Pictured on the monitors in the Batcave (clockwise from left) is an OMAC; a group shot of the early JLI including Maxwell Lord, Martian Manhunter, Blue Beetle, Guy Gardner, Batman, Booster Gold, Mister Miracle, and Fire; Maxwell Lord; an alien Dominator; and more OMACs.

Page 6, panel 2
When the Justice League reformed into what would become known as the Justice League International, Batman (Bruce Wayne) did indeed believe that he was organizing the team before Maxwell Lord revealed his hidden involvement.

Page 7, panel 1
"Cheese and Crackers" is recognized both as Cockney rhyming slang for testicles, and more widely as a non-profane exclamation. Booster Gold uses the phrase here perhaps accidentally substituting the entire phrase for just the word "crackers," which alone is common English slang for "crazy."

Page 18, panel 3
Fire has always been one of Booster's harshest critics. Despite the fact that he is probably the most intelligent of the four humans who remember Maxwell Lord's existence, his judgment has long been terrible, and his public image has suffered accordingly. Amusingly enough, Captain Atom's public image was recent rebuilt in Action Comics #889 via some good press coverage following many months of monstrously villainous behavior only to have it be completely undone one issue later.

Page 21, panel 5
Booster Gold and Skeets appear confused to be standing in front of a suburban home in El Paso, Texas that belongs to the Reyes family. This is odd considering Booster's extensive history with Jaime Reyes and the fact that Ice has previously attended a backyard barbecue with the Reyes family (as seen in Blue Beetle, Volume 2, #25).

Boosterrific Review: Full disclosure: the biggest problem with this book is that it is not living up to lofty expectations so far. But that excuse only goes so far. The issue is full of inconsistent characterization, some intentional and some less so. (Are these characters so thick-headed that they don't understand their own dire situation? Do they even know their own histories?) Also inconsistent is the art, which wavers between sexy "good girl" pin-ups and wildly uneven profiles and figures. (Why does Fire's bust fluctuate in size, and where are Booster's injuries?) To make matters worse, even the story seems to be unfolding at a uneven pace, tilting between furious battles and plodding, page-filling discussions. (Talk, fight, talk, fight.) This series is still very young and may yet find it's balance and stride, but after two issues it is still only slightly better than average and not quite all that could have been hoped for.

(5 votes)
BoosterPowershot (Oct. 22, 2010, 00:28:10)
I believe I'm a little less harsh on this series than many. Given that it's a biweekly, I figured that the issues would be stretched and there would be a lot of filler or repeating scenes. It would annoy me if it were a monthly, but since it comes out every other week, I'm not too perturbed by it. That said, I enjoyed this issue, not as much as the first, but still enough to give it 4 stars.
Harry (Jun. 12, 2010, 22:36:22)
This was not a great issue. The story is still in set up mode and was choppy. Many of the characterizations feel off because our protagonist must behave in certain ways to advance the plot. All this would be relatively acceptable except that the art is terrible. The series as a whole should survive this issue, provided the story picks up. I do hope the art improves.
Erin (May. 29, 2010, 05:16:27)
Not as strong as the first issue. The art wasn't up to par, there were flubs in designs, and most distracting of all Boosters' injuries were gone. When you have characters mention this more than once in the script its' really a problem. I can give the writers the benefit of the doubt for the mindwiped heroes acting snobby since Captain Atom points out that Superman isn't acting like himself implying it has to do with the mindwipe. I didn't like how fast the others ganged up on Booster, which was especially out of character for Ice. Max does prove to be a challenging foe even though he's never actually near any of them this issue. I gave this issue an extra star because it had a good link to canon with Booster going to Dick, and Boosters' determination despite seemly impossible odds. That's pretty good character development from the guy who didn't trust himself to be able saving the day in 52.
Superman (May. 28, 2010, 11:03:11)
Plot was predictable in this issue. Nothing exciting transpired until the last panel. But I'll still keep the faith and hope Winick and Giffen pick up a couple of issues soon. This could be the next most important series for Booster, if only the story is done right.
KMD (May. 27, 2010, 23:10:32)
Not good. Besides a slow second issue with the antagonist almost MIA the entire time, the writers seem to have no idea that Booster has changed as a character and has a detailed history--he knows all about Jamie Reyes. A little bit of research here would not have hurt. The main plot seems to be stretched beyond anything remotely credible and some of the leads, who all have their share of personality, have become....well dull.