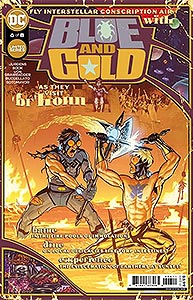 Brief Synopsis: On the alien planet Beh'imoor, Booster Gold and Blue Beetle are forced to fight for the appeasement of Lord Kif'n.

Story Notes: Skeets and Terri Collins appear in this issue but do not cross paths with Booster Gold.

Page 1, panel 1
Rip Hunter appears to be breaking the so-called "fourth wall" and directly addressing the reader as he introduces himself and recaps recent events (as seen in Blue and Gold #5)...

Page 2, panel 1
...but a turn of the page reveals that his audience is actually Terri Collins and a pair of enthusiastic Blue and Gold fans who use the online alias "t-grrl" and "she kat." It's a clever panel sequence that explicitly defines t-grrl and she kat as metatextural reader surrogates. Ask yourself, are you a Beetle-maniac like t-grrl or a Booster booster like she kat?

Page 2, panel 2
As Skeets repairs Buggles, the latter calls the former "Mr.", and the former calls the latter "Ms." Strictly sepaking, neither of these two artificial intelligences has a biological sex, so these sex-specific honorifics are affectations of their programmed personalities and chosen gender roles. Is the adoption of these formal titles a sign of budding robot romance? Should we start calling this pair "Skeetles"? (Yes. Yes, we should.)

Page 4, panel 1
Meanwhile, Booster Gold and Blue Beetle are prisoners of Lord Kif'n on the planet of Beh'imoor.

Page 5, panel 1
According to the Online Etymologoy Dictionary, "throne" has been a slang synonym for "toilet" (traditionally made from porcelain) since 1922.

Page 6, panel 8
When Booster and Beetle refuse to fight one another to the death to "cement the ties between Beh'imoor and Earth," Lord Kif'n has his daughter, Omnizon brainwashes Booster into believing that Beetle had killed his family. Ever since his earliest adventures with the Justice League (as in Justice League Annual #1), mind control has continually been among Booster Gold's greatest weaknesses. (For the record, Beetle is not immune. He was programmed into attempting to kill Maxwell Lord by Queen Bee in Justice League America #26.) 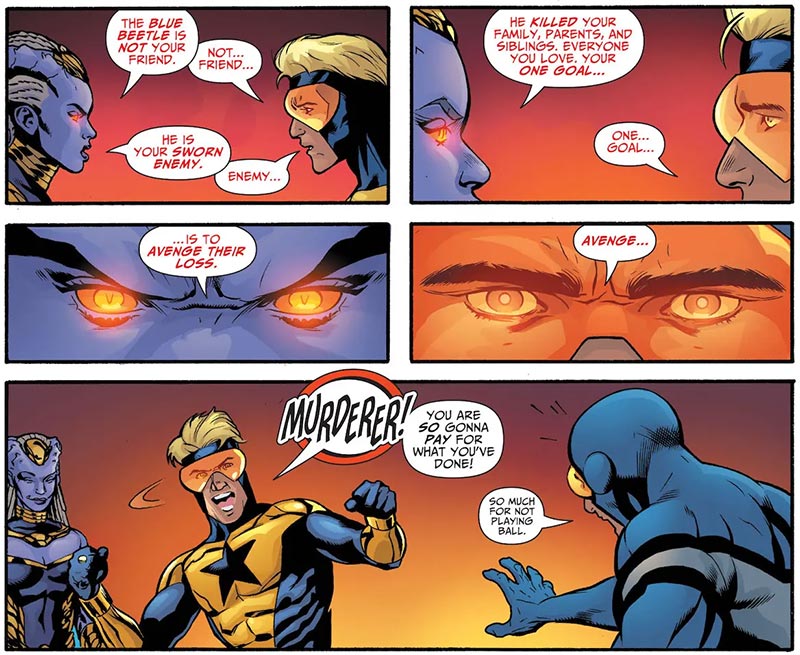 Page 8, panel 1
If Booster was in his right mind, he would certainly appreciate that Lord Kif'n is broadcasting his fight with Beetle to the citizens of Beh'imoor. Booster will be a celebrity on two planets!

Page 8, panel 5
Best friends being forced into a combat to the death is a staple of science fiction and fantasy stories (and superheroic comic books). That the winner will also get the girl (in this case, Omnizon) was also part of the plot of the classic 1967 Star Trek episode "Amok Time." In that case, it was Captain Kirk in gold and Mister Spock in blue (but the usually logical Spock was the one out of his mind in that instance).

Page 9, panel 1
The "Toba Event" was an enormous volcanic eruption so named because of its location at what is now known as Lake Toba in Sumatra, Indonesia. Some theorize that the ash thrown into the atmosphere was responsible for significant global cooling and mass extinctions.

Page 9, panel 2
Why is Terri so surprised to have traveled into the past? She accompanyied Rip Hunter into the future in Booster Gold #13.

Page 10, panel 3
It is a matter of great debate among anthropologists about when, exactly, humans became recognizably human, but it may have happened within a few thousand years of the Toba Event. If aliens were already visiting the planet, could they have played a role in the development of human civilization in the DCU?

Page 11, panel 5
After Rip explains that he keeps his true identity a secret so that his enemies cannot kill his ancestors to erase him from existence...

Page 12, panel 4
LIQUIFIED TIME: In Booster Gold volume 2 #5, Rip introduced the concept of "solidified time," or events that are unalterable. If he is prepared and capable of changing history here, this event is not integral to stabilizing history.

Page 14, panel 1
It would seem that despite his brainwashing, Booster is not really trying to kill Blue Beetle. Back on page 4, Beetle urged Booster to save the battery in his Booster Shots for future use, but despite now being weaponless, Booster still doesn't use his suit's energy beams or super-strength. And we know that Booster still has energy in his batteries because...

Page 15, panel 5
FASHION ALERT: Where, exactly, does Booster find the paint to draw a star on his chest?

Page 16, panel 6
Omnizon vows to discover how Hunter cheated her, but she doesn't bother trying her mind control to interrogate him further. Is her power limited in some way?

Page 16, panel 7
Surely Ted has a plan here other than killing Booster, right? In Justice League International #66, Ted brought Booster back from the dead. Maybe he thinks he can accomplish something similar here. (For the record, in "Amok Time," Doctor McCoy injected Captain Kirk with a sedative that only simulated death to end the fight.)

Page 16, panel 8
SPOILER WARNING!: Back on page 8, Beetle lamented that the cavalry was not coming. Yet it did, in the form of Rip Hunter. According to the Encyclopedia Britanica, the term deus ex machina was originated in the 5th century B.C. to refer to the plot contrivance where a god would appear on stage to magically resolve the narrative of a play, "(e.g., the arrival, in time to avert tragedy, of the U.S. cavalry in a western film)." Reveal

Page 18, panel 7
Paradox alert! If the marker was moved 70,000 years in the past, then from the point-of-view of Lord Kif'n, it was never on Earth. The only way history could have unfolded the way it has was if the invasion of Earth seen in Blue and Gold #1 was undertaken without Kif'n and Omnizon ever actually bothering to look for their marker. That's some pretty villainous behavior!

Page 20, panel 3
SPOILER WARNING!: Speaking of unlimited power, Rip Hunter reunites Booster and Beetle with she kat and t-grrl — without the use of his Time Sphere. Did Omnizon send them back using her teleportation device (as seen last issue)? Reveal

Page 21, panel 2
HIS STORY: The view that Terri accidentally sees in the time sphere is of an older Booster Gold and his son, Rip Hunter, as seen on page 1 panel 2 of Time Masters: Vanishing Point #2 (2010), establishing conclusively that the events of that series — and therefore Rip Hunter's post-Crisis on Infinite Earths continuity — are still intact in the post-Infinite Frontier DC Multiverse.

Page 21, panel 6
Rip refuses to reveal the identity of his mother to Terri Collins. Booster's future wife was seen from a distance in Time Masters: Vanishing Point #4 (page 2 panel 4), where she was depicted as a blonde. A decade later, we still don't know.

Boosterrific Review: Golly, I enjoyed this issue. Sure, the plot relies heavily on some threadbare cliches, but Jurgens and Sook are keenly aware of what they're playing with and use it to frame a story about time travel and family.