The Adventures of Superman Annual 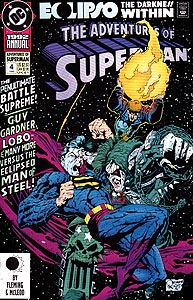 Cover Description: Superman, possessed by Eclipso, is attacked by Lobo and Guy Gardner. (No Booster Gold.)

Brief Synopsis: The heroes of the DC Universe assemble to combat an Eclipso-controlled Superman.

Issue Notes: The story in this issue ties into the summer-long "Eclipso: The Darkness Within" storyline running throughout the 1992 DC annuals.

Page 5, panel 2
Through diligent detective work, Booster Gold locates where Eclipso is hiding Superman from sunlight. (Exposure to sunlight is the only method to free Superman from Eclipso's dominance). Present for Booster Gold's revelation are fellow Justice Leaguers Bloodwynd, Fire, and Ice, as well as the New Titan Wildebeest III. Fire is inexplicably wearing her old costume, replaced with a more modern look in Justice League America #63. This is Booster's first meeting with Wildebeest. 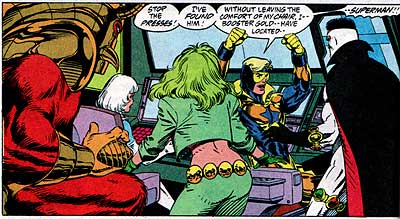 Page 16, panel 1
Because of Booster's impenetrable force field, he is chosen to accompany a select group of heroes pursuing Superman inside an active volcano. The other heroes on the team include Bloodwynd, Fire, Guy Gardner, Lobo, Metamorpho, Phase, and Strata.

Page 20, panel 3
If at first you don't succeed, try, try again. For the third time in his career, Booster hits Superman with his Booster Shots. Just like the two previous times, they have little appreciable effect. Some heroes never learn.

Page 25, panel 1
Booster Gold and his equipment are strong enough to survive the explosive eruption of a Hawaiian volcano...

Page 37, panel 1
POWER DOWN: ...but not a punch from Superman, who shorts out Booster's force field and Flight Ring with but a single swing. This raises the unanswered question of where the power of Superman's punch would fall on the Volcanic Explosivity Index (VEI)?

Page 48, panel 1
Booster Gold, Elongated Man, and Fire arrive at Meteor Crater, Arizona, in order to rescue Starman V from the Eclipso-controlled heroes Creeper, Deathstroke, Flash III, Green Lantern II, Hawkwoman II, Lady Quark, Maxima, Pantha, Power Girl, Red Star, Star Sapphire, Starfire, and Wonder Woman. Since none of these characters can be considered themselves, despite it being the first time that Booster has met (much less fought) several of them, it hardly qualifies as a meeting. Note that while she is controlled by Eclipso, Wonder Woman's tiara depicts not its typical star, but instead a crescent moon. Meteor Crater, Arizona, is the site of a spectacular impact crater approximately 4,000-ft in diameter in northern Arizona.

Boosterrific Review: An enjoyable struggle between Eclipso-Superman and the heroes of the DC Universe is marred somewhat by the unnecessary subplot of saving a primitive society from a volcanic eruption and an inexplicable solution involving a cauldron of liquid sun, both of which feel a little contrived in order to extend the story and artificially increase page count.