Boosterrific.com
>
Comics
>
The Adventures of Superman #463

The Adventures of Superman 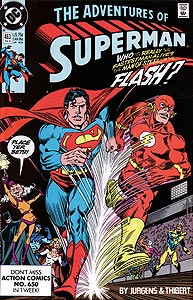 Brief Synopsis: Mr. Mxyzptlk forces Flash and Superman to race for the fate of the world.

Issue Notes: The cover to this issue is nearly identical to that of Carmine Infantino's 1967 cover of Superman #199, the first race between Superman and a Flash (Barry Allen). Booster Gold stands in the area originally occupied by Hawkman and Wonder Woman.

Issue Reprints: This issue has been collected in Superman vs. Flash.

Page 16, panel 4
The race between Superman and Flash III is being tracked by citizens from around the globe. Blue Beetle II, Booster Gold, Martian Manhunter, and Mister Miracle track the runners' progress through the Soviet Union via the computer in the Justice League International's New York Embassy. Booster is cheering for Flash...

Page 16, panel 5
...only because he's wagered $1,000 at 4:1 odds on Flash's victory. Whether Booster is gambling because he knows the outcome, received favorable odds from a sports book, or simply doesn't like Superman is anyone's guess. In any event, it's generally bad form to wager against the eponymous star of the issue.

Page 19, panel 10
Professor Hamilton says that Flash and Superman are running at "several times the speed of sound." If they ran around the Earth (which has a 25,000 mile circumference) while maintaining an average speed of mach two (approximately 1535 miles per hour), this competition would take about 16 hours to complete. For comparison, it takes the best runners in the world about 2 hours to complete a 26.2 mile marathon, the equal of circling the globe in something near 1,908 hours (80 days).

Boosterrific Review: This is a highly enjoyable story of the first race between Superman and Flash III. The contest is organized by Mr. Mxyzptlk, engineering some good-natured conflict between the story's heroes while still allowing for a straightforward and fun race against a common foe. This comic is a sports event worth attending.