This Day in History: Just Say (Kingdom of) No

But before Damian Wayne or All-Star Superman or "Mageddon," Grant honed a talent for thinking outside the four-color corner box with often bizarre deconstructionist experimental comics like The Invisibles, Arkham Asylum: A Serious House on Serious Earth, and The Doom Patrol. That last one was especially fitting, as the Doom Patrol had billed itself as "The World's Strangest Heroes" since it's earliest appearances in 1964.

Booster Gold would find out just how strange they were in Doom Patrol #29, released on this day in 1989. The Justice League International confronted Morrison's brand of psychedelic madness head-on after Mister Nobody and his Brotherhood of Dada displayed a stolen painting that eats people (and also happens to contain the Fifth Horseman of the Apocalypse, "Extinction") under the Eiffel Tower and... well, see for yourself: 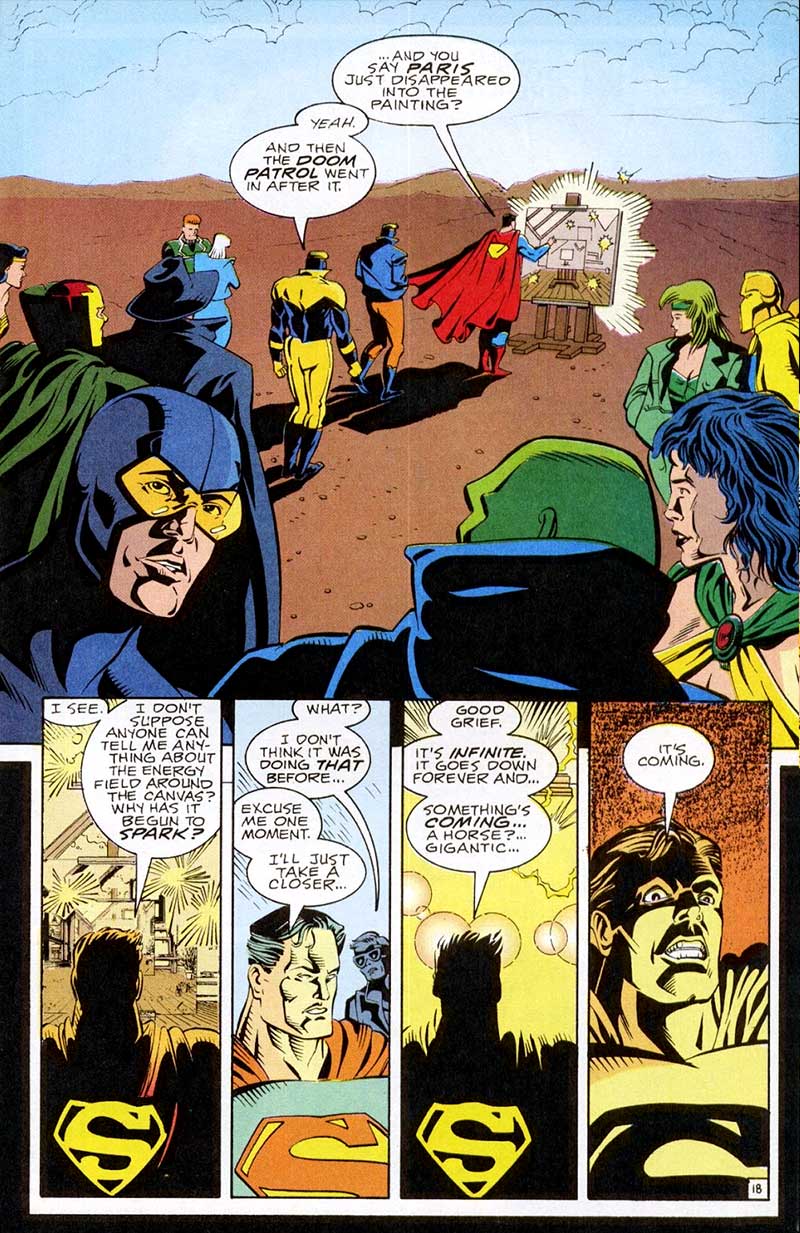 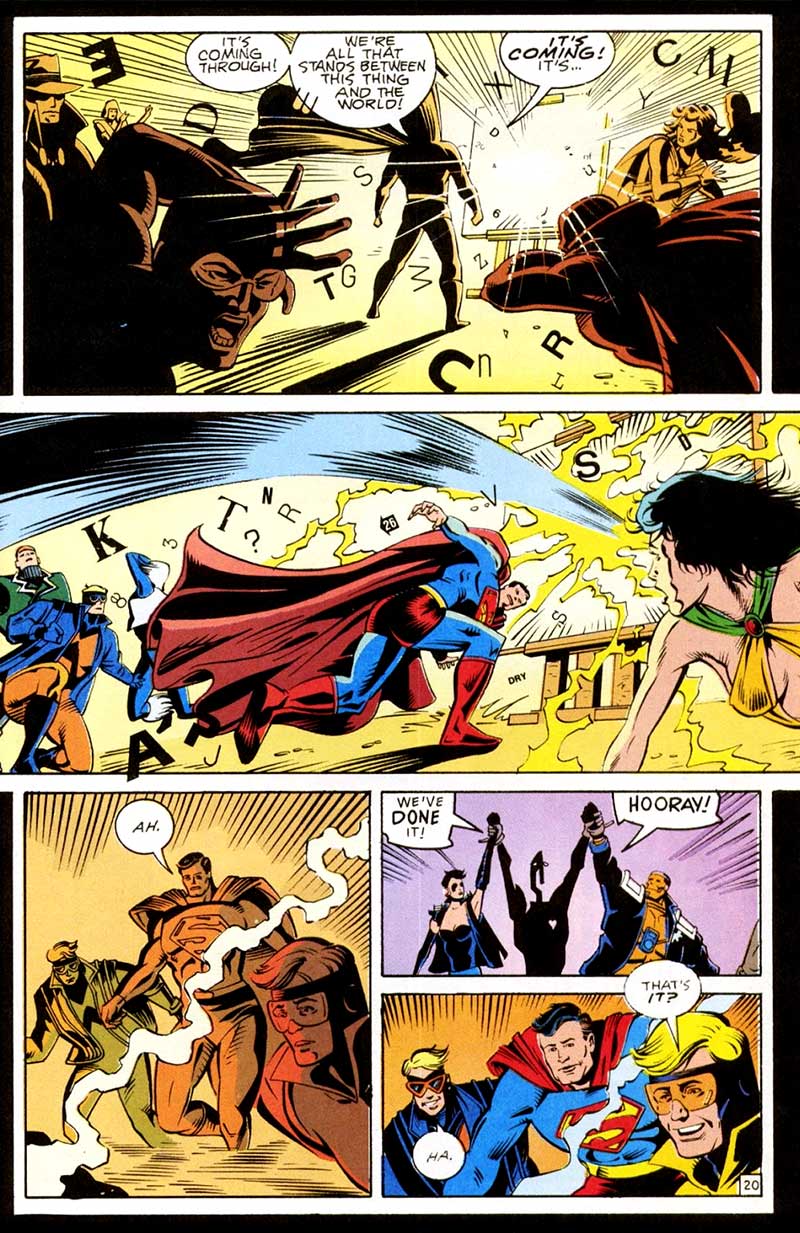 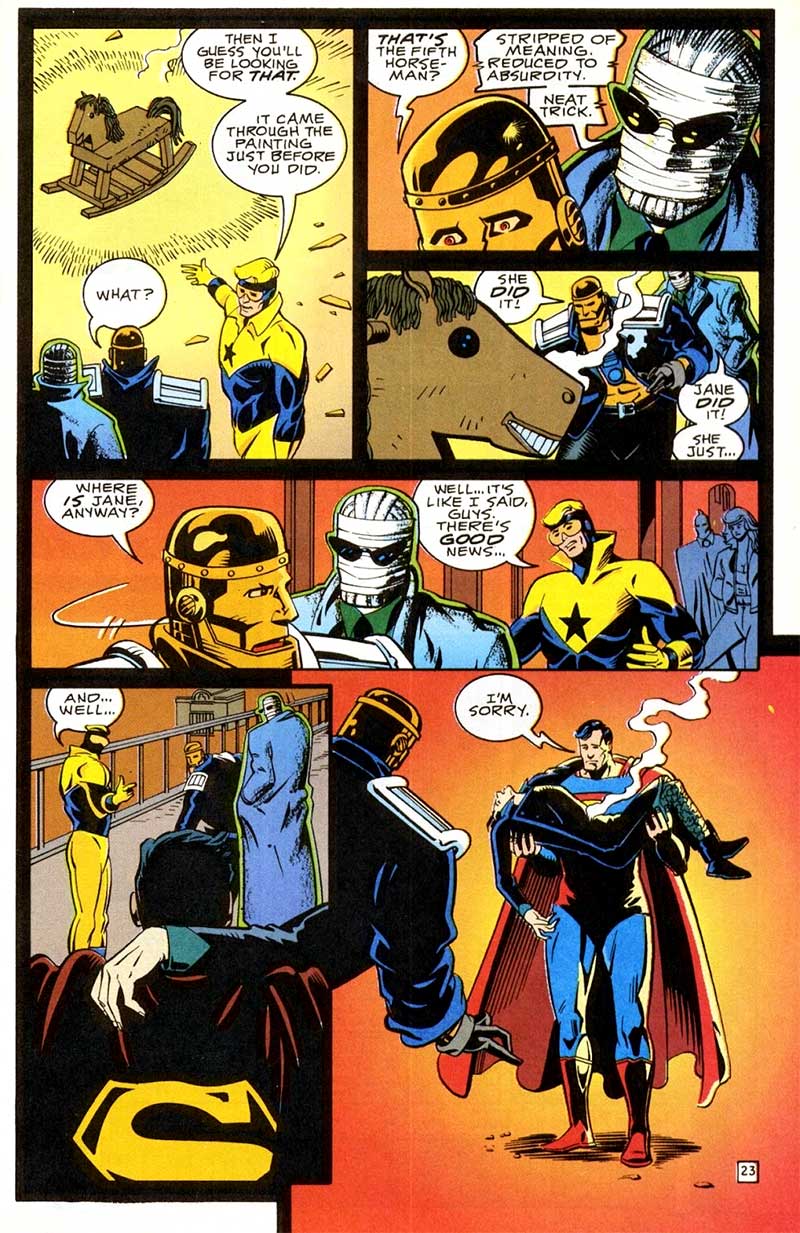 Just another regular day on the job for Morrison's Doom Patrol.

Booster Gold #16 is peak 1980s. From the "Greed is Good"-era mock corporate advertising on the cover to Booster's Miami Vice white suit with untied high-top kicks and short-cropped hair, this thing oozes day-glow and Rubik's cubes.

And while I do love all that stuff — after all, I am a child of the 80s who grew up with Knight Rider and Transformers — the page I appreciate the most in this issue is the throwback to the Silver and Bronze Ages of comics when readers were treated to cutaway views of important places like the Batcave or the Fortress of Solitude.

Meet the Booster Gold International Mansion (with garage and helipad in back)! 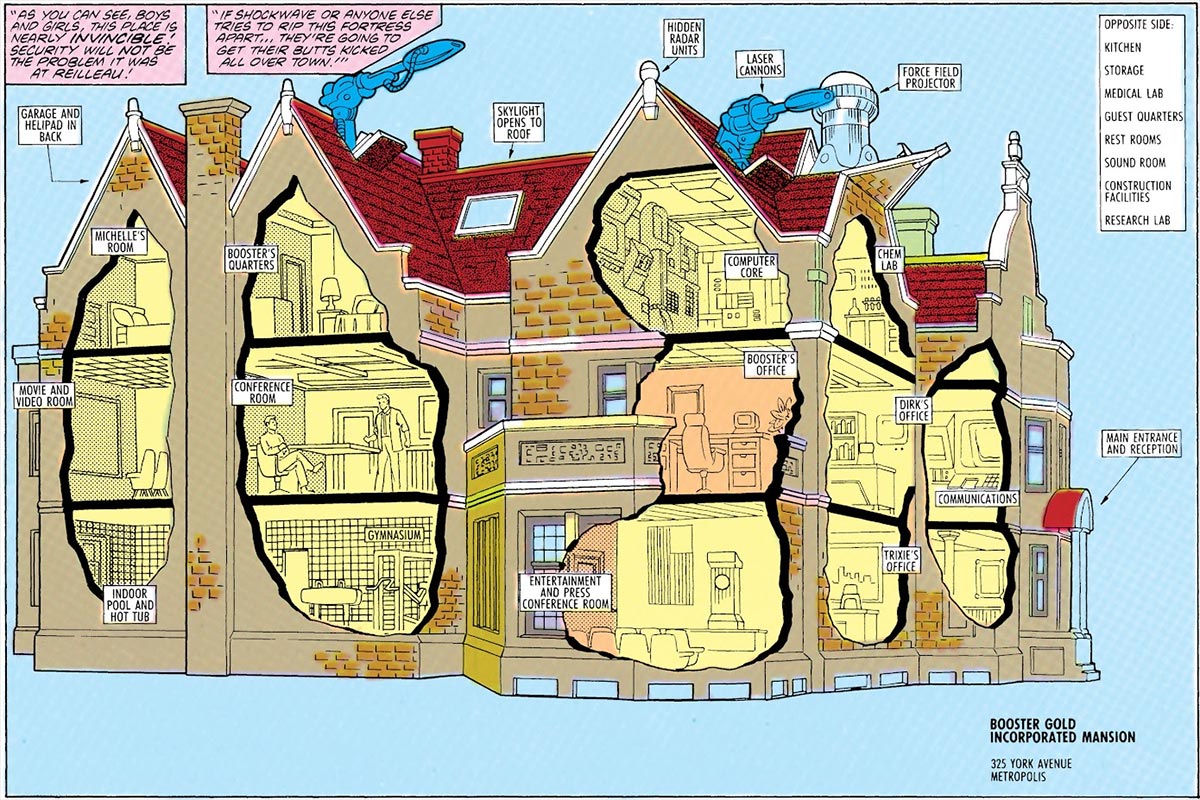 Check out that American Flag in the Entertainment and Press Room! Rambo couldn't have done it better.

Brandon posted on Nov. 28, 2022 at 4:25 AM
Volume 1 becomes rather depressing at this point. Still well written and well drawn, but lots of death and betrayal in the final 9 issues.

Boosterrific [Official Comment] posted on Nov. 28, 2022 at 9:05 PM
There's less than a year left at this point, but I think the back third of the series (after Booster comes back from the future) suffers mostly because it's not very cohesive, lacking the "big bad" of the first year's arc. There are a lot of reasons for this behind the scenes, but that really shouldn't matter to consumers, who only see the finished product. All the bad things happening to Booster start to feel so random, like the universe is just hating on our hero. No one want to read comic books that bum them out.

On the up side, it's these later issues that establish Booster as a sad sack, a situation that drove his natural pairing with the equally unfortunate Blue Beetle in JLI. So this "depressing" run of comics gave us the enduring Blue and Gold team, and there's nothing depressing about that!

DC's February 2023 solicitations were released last week, and it appears that Booster Gold will play some role in the eight-issue "Lazarus Planet" event first announced back at New York Comic Con.

Or, at least, he'll be on the David Marquez cover to Lazarus Planet: Omega #1:

Given that A) Omega is the final book in the event, B) none of the solicitations or promotions otherwise mention him, and C) our hero is usually backgrounded in these sorts of big event stories, I don't have much hope that Booster will be playing a big role in this event.

But maybe I'm wrong. I sure hope I am. We'll certainly find out when Lazarus Planet: Omega comes our way on February 21.

Meanwhile, you can read more about Lazarus Planet and all other DC comics coming in February at GamesRadar.com.