Today Judd Winick is 50 years old, and he has spent many of those years creating comic books. (Technically, he's spent most of the past decade creating best-selling Hilo graphic novels for middle schoolers, but c'mon. We all know graphic novels are just longform comic books.)

Though Winnick has rarely worked on stories involving Booster Gold, there is one notable exception:

Justice League: Generation Lost is the story of former Justice League International members efforts to bring their former mentor, Maxwell Lord, to justice for his subsequent crimes against humanity.

The series began in 2010 and for the most part took into account nearly two decades worth of shared-universe heroic adventures. To Winick's credit, if you'd never read a single issue of Giffen and DeMatteis's Justice League International or Johns' Countdown to Infinite Crisis and Blackest Night, I'm sure you can still enjoy Justice League: Generation Lost. It's as much a traditional superheroic action/adventure story as it is a revenge story.

And for Booster Gold, it was very, very personal.

In fact, Booster's key role in this story is a huge part of why I included the series in my 2020 list of the 12 Best Booster Gold stories ever.

Unfortunately, the story's impact was promptly devalued as the established DCU was discarded for the New 52. That means there are a decade's worth of new DC readers who are unlikely to be familiar with this great tale, which is a real shame.

As a birthday present to Mr. Winick, how about re-reading this great series. Better still, recommend it to someone you think would like it. It'll be like Winick gave *them* a present for *his* birthday.

Eskana posted on Feb. 12, 2021 at 10:53 AM
One of my favorite JLI stories. It culminates all those years of history, even if it was erased by the New 52, and the ending promise of re-forming the JLI never (really) came true. I think it really showcases the effectiveness of the JLI and how they've grown and matured, but also what I like best about them: they really seem like friends who'll always have each other's back. Sure, they bicker, but they can still work together and look out for each other. The normal JL work really well together, but other than a few pairs (like Flash and GL,) they've never seemed as close-knit as the classic JLI members, at least to me. More like work-friends, while the JLI is more like a family (IMO.)
Since we may never see this line-up again (and even though, sadly, we were short a few members,) I'd be okay with this being one last hurrah for the team. Fantastic story.

Boosterrific [Official Comment] posted on Feb. 12, 2021 at 4:21 PM
The International-era League *is* family. Most other incarnations are just glorified team-ups, which is fine for a top-tier paramilitary force designed to protect the planet against severe threats but rarely makes for the most impactful stories. 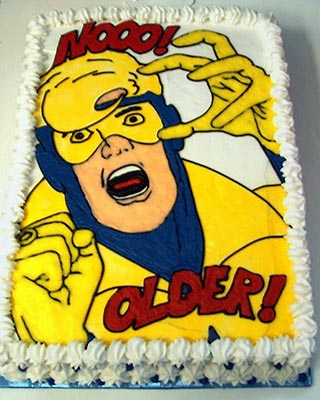 Congratulations, Booster! Here's to many more birthdays to come, negative or otherwise.

In celebration, consider buying today's Batman Beyond #21 written by Dan Jurgens! Maybe also a copy of today's Man of Steel #5, which Jurgens had nothing to do with other than inspiring the cover with his own layouts from the now-classic 1993 Superman #75!

If we're all really, really nice to him, maybe he'll find a way to sneak Booster into Green Lanterns. (Hmm. Isn't it about time there was a gold lantern? Booster already has a ring.)

Today marks the -426th birthday of Jon Michael "Booster" Carter, born this day in the year 2442.