What Will Future Issues of TV Guide Say?

These polls don't often surprise me, but I wasn't prepared for the response that most of you are more invested in Booster Gold naming Doomsday than you were in KooeyKooeyKooey.

Last week's poll question: Which piece of Booster Gold's history are you least bothered to see omitted from the New 52 reboot? (40 votes)

I suspect that I underestimate the power "Death of Superman" had in invigorating the comics-buying public and the influence that the story still holds for DC Comics readers. I don't know why that should be. I personally still wear a "Reign of the Supermen" era Superboy black leather jacket with an "S"-shield on the back and a Superman #75-style mourning armband.

But enough about me. Let's talk about what I want to watch on television. Namely, a show starring my favorite hero!

Apparently, once a decade isn't often enough for Booster Gold to brag about naming Doomsday. 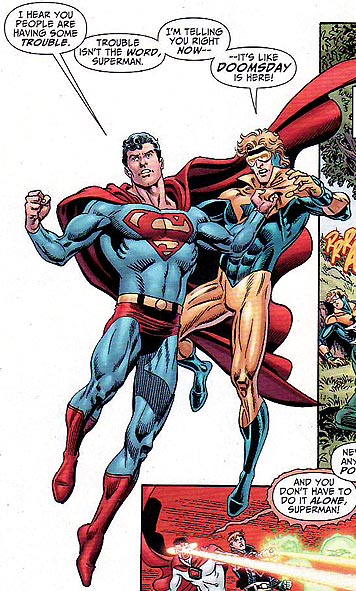 Booster's ability for naming disasters must be widely known if a retired detective includes it in his flashbacks to the 1990s in DC Universe: Legacies #7 in 2010.

Ten years after the death of Superman, Booster Gold retold his side of the story to reporters. Given Booster's endless self-promotion, his story is surprisingly accurate to historical events. 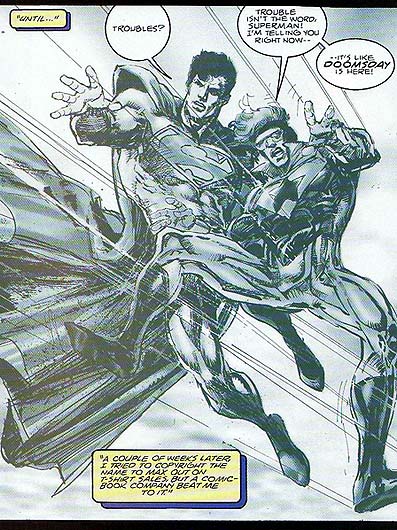 The flashback dialogue in 2003's Superman: Day of Doom #1 is very familiar, but the bit about Booster's failure to reap the rewards of copyrighting the name "Doomsday" is news to us.

Looks like the guys at Blaze Comics beat Booster on the copyright!

SuperPat posted on Jun. 3, 2011 at 1:21 AM
This was actually the first comic I owned with Booster Gold in it. I had no idea who he was at the time though, or that I'd be such a fan in the future.

It has been said that those who don't know history are destined to repeat it. However, Booster Gold hasn't only learned history, he's lived it, and it looks like he'll be repeating it anyway. To celebrate this rematch in the making, Boosterrific is taking a look back at what came before. 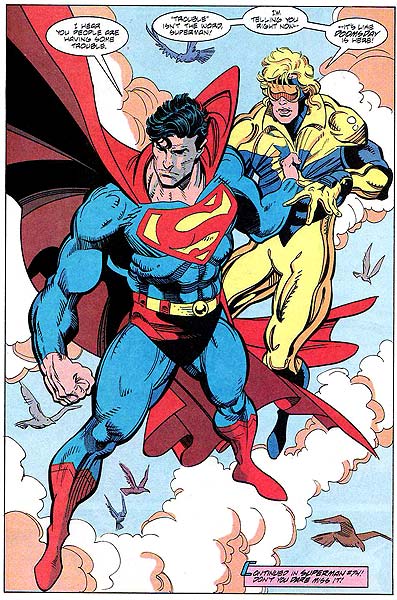 Booster Gold first met and named Doomsday in Justice League America #69 in 1993. As we will soon see, it was a significant event that Booster wouldn't let anyone else in the DC Universe forget.