"My life has changed in so many ways over the past decade" is something I could say every 10 years. In 2009, I was reading new Booster Gold comic books and watching Attack of the Show on G4. None of those things exist anymore.

Fortunately, I don't have to rely on my memory to recall those golden days because I still have my copy of Booster Gold Volume 2, #23, released 10 years ago today. 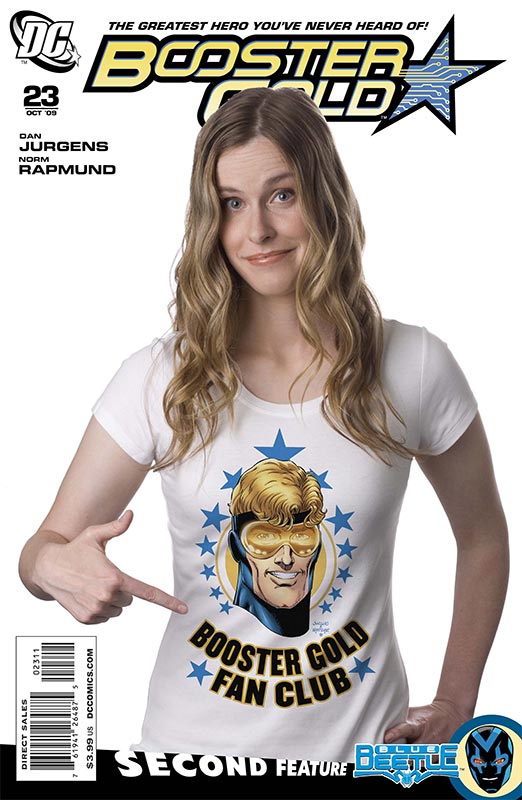 For those of you too young to remember, Blair Butler reviewed comic books in her "Fresh Ink" segment on Attack of the Show. She had been very positive about Booster's second series, and DC Comics thought she would make the perfect spokesperson for Booster's fan club. I couldn't agree more.

Butler described how she earned this once-in-a-lifetime opportunity to Laura Hudson of ComicsAlliance.com shortly after Comic-Con International on July 29, 2009:

ComicsAlliance: So, how did the whole "Booster Gold" cover with DC come about?

Blair Butler: I actually got a call from Dan DiDio who said he had a crazy idea for an upcoming issue of "Booster Gold." Basically – and forgive me, because my memory sucks and I'm still recovering from Comic-Con – I recall that he said DC wanted to do a cover that sort of stood out for #23, and having a photo cover with a Booster fan was the main idea. It seemed oddly appropriate, since Booster is a bit of an attention hog. I think he'd not-so-secretly love the idea of having a lady-fan on the cover of his book. And, honestly, I was incredibly humbled that DC would ask me to don the Blue and Gold fan colors. I've loved comics since I had to stand on a stool to reach the quarter-bins at my local comic shop, so it's pretty awesome to get to be part of a DC comic.

CA: So what exactly makes you Booster Gold's biggest fan?

BB: Well, first, let me just admit that there are some massive Booster fans out there who really dwarf me – the folks who run the Boosterrific site, the guys at Project Fanboy, and the folks in the DC forums. They're all so passionate that it's really awe-inspiring and humbling. But let's settle this now: The real #1 fan would be Skeets or Blue Beetle. And I think Ted wins. However, if this were the mid-80s, Trixie Collins would totally be on the cover, rockin' some awesome 80s shoulder-pads.

I think the people who love Booster really respond to the fact that even though he's a shameless self-promoter, at the end of the day, he's a good, decent, heroic person at the core. Plus, when you live in LA, there's no more fitting superhero than Booster. I mean, the guy saves a crashing plane and does product placement. So Hollywood.

CA: We all know that you're going to be on the cover of "Booster Gold" now, but are you going to make an appearance inside the book as well?

BB: Straight from Dan Jurgens' mouth, I'll play a "slight role." Honestly, having anything to do with the comic is an honor.

That "slight role" was a romantic one. Butler went on a few dates with Booster, joining a list that includes movie star Monica Lake and the super hero Firehawk. An honor indeed!

Butler has since moved from writing for television to writing movies, but I'm sure she's still reading and enjoying Booster Gold comic books.

Meanwhile, Comics Alliance has been defunct since 2017. DC Comics closed their forums in 2016. G4 went off the air in 2014. Project Fanboy dissolved in 2013. Booster Gold Volume 2 was canceled in 2011. But Boosterrific.com is still here (feeling very, very old).

Boosterrific [Official Comment] posted on Aug. 12, 2019 at 3:16 PM
Ha! Back in 2009, we didn't watch YouTube; we watched television. G4 was a cable television network dedicated mostly to gaming and technology. Blair was an old-fashion teevee star!

Cort posted on Aug. 12, 2019 at 4:11 PM
I also had zero clue. I was still in the UK then so if it was on BBC I missed it, I too thought it was a DC staffer of sorts. Very enlightening. Comics Alliance and Project Fanboy I tuned into from time to time. It's quite bizzare really I never found this site sooner. Irregardless I'm happy it's still around for me to have found it.

Today is Wednesday, and just like every other Wednesday for the past 58 weeks, there will be no new Booster Gold comic books at your Local Comic Shop.

Over the weekend, Russell Burlingame explored the questions of why this has happened and how it can be fixed in an article for ComicBook.com.

Burlingame isn't alone in wondering whatever happened to Booster Gold. Last week, Kieran Shiach of ComicsAlliance listed Booster Gold as the number one DC property in need of a new comic. I agree!

Here's hoping we'll see our hero again before DC Comics has it's next reboot. (Although, at the rate they're going, even that will be sooner rather than later.) Booster Gold is too good a hero to leave on the sidelines for long.

FKAjason posted on Sep. 15, 2016 at 3:16 PM
Well, you know how WE feel about Booster over at Silver & Gold. He DEFINITELY needs a new series. He's so unique. He's so cool. And in the past he's been kind of an essential character in the DCU.

Perhaps we should change the name of our podcast to Waiting for Silver and Gold. It only took the Waiting for Doom guys about five years to get a new Doom Patrol series.

Boosterrific [Official Comment] posted on Sep. 15, 2016 at 3:40 PM
I like #BringBackBooster. I think I'll start working that into future rants.

Last week I asked you to vote at ComicsAlliance.com when I discovered they were polling for characters who needed solo books. We're still waiting to see how that turned out. Meanwhile, this is the question I was going to ask last week before I saw that poll.

This week's poll question: Which inter-company crossover would you be most likely to buy? Please visit the Boosterrific Polls page to view results for this week's poll.

Salrantol posted on Dec. 17, 2015 at 6:47 PM
I would like to see Booster Gold/Captain America. I have always liked the dynamic between Booster and Superman, and this would be similar, but without the massive power discrepancy Booster has with Superman. Dealing with Captain America would bring out both the virtues and the flaws of Booster by the stark contrasts with Cap, while giving him a rival with comparable power level.

Robert posted on Dec. 17, 2015 at 7:42 PM
Booster Gold/Guardians of the Galaxy -or- Booster Gold/Squadron Supreme

Boosterrific [Official Comment] posted on Dec. 18, 2015 at 12:18 AM
@Salrantol You're in good company. When I ran a variation on this poll back in April 2010, Booster Gold/Captain America received 50% of the total vote.

Ariel Justel posted on Dec. 18, 2015 at 7:55 AM
Crazy as it sounds I would love to see a Thanos/Booster Gold team up. The anti-hero solo-series version of Thanos.

I think Booster would make a great dad. Unlike Superman, Booster would take the time off from heroics to watch a football game with his kid.

Somethign different for today's poll. I'm going to ask you to go over to ComicsAlliance.com and cast your vote for the "character most in need of a solo book." I'm not going to tell you who to vote for, but Booster Gold is on the list (hint, hint).