It's been a long while since I re-posted anything from Ross Pearsall's amazing Super-Team Family Presents... blog, but he's finally given us more Gold, this time teaming with Canada's premiere team of heroes, Alpha Flight!

"Come with me if you want to live," indeed.

I'm sure that this team-up is based on Dan "Good Riddance" DiDio's claim that New 52 Booster Gold would hail from north of the border, something that I will once again point out has still never been confirmed or even addressed in the pages of a DC comic book.

So far as I'm concerned, Booster Gold will remain an American until a Black Lantern Ronald Reagan rises from the grave to revokes his citizenship (or at the very least, DC publishes some actual evidence between the covers of one of their comics magazines).

That said, I cannot deny that I love seeing some Gold leading the charge, into the Great White North or anywhere else. Thanks, Ross.

Cort posted on Mar. 30, 2020 at 10:05 PM
Even as a Brit who is now Canadian, Booster being Canadian seems...Odd. Theres a bit of American capitalism and sensationalism that is core to Booster bleeding out of Olympic sponsorship and 80s sell-out mentality. Plus n52 Booster was a strange bit to begin with. Ah well.

Love Alpha Flight and love the mashup all the same.

Booster Gold Still Not Canadian Since 2011

This still comes up from time to time, so let me repeat that there is no canonical evidence that Booster Gold is anything other than American. 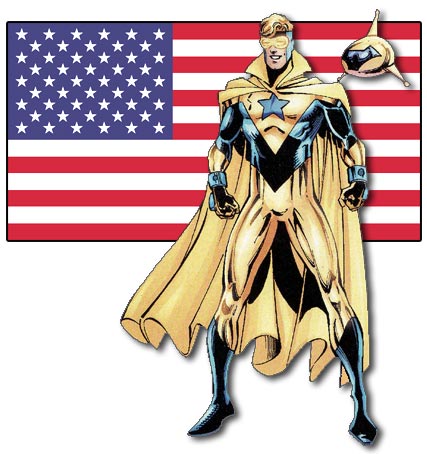 Yes, Dan DiDio told the audience at Fan Expo Canada 2011 that Booster Gold was going to have Canadian citizenship in the New 52 DC Universe. But no comic book ever came along confirming (or even insinuating) that.

Since his earliest appearances, Booster has been an American (thanks to direct intervention by United States President Ronald Reagan), and his citizenship has never been explicitly changed in Justice League International Volume 3 or in any other comic. To this day, Booster Gold remains Canadian only at Fan Expo Canada 2011 and nowhere else.

BoosterFett posted on Jul. 6, 2018 at 11:38 AM
The article does go on to state that it is NOT confirmed that Booster Gold or Adam Strange is Canadian, according to a DC spokesperson.

Boosterrific [Official Comment] posted on Jul. 6, 2018 at 3:51 PM
I think that we'll be knocking up against this rumour for some time to come until DC finally addresses it in print. The real question is whether his citizenship should matter. So far as I'm concerned, he's a citizen of 25th century Gotham.

Bob Rossetto posted on Jul. 6, 2018 at 8:20 PM
have you heard that Booster Gold is going to get his own solo series Someone at my local comic shop told me

Boosterrific [Official Comment] posted on Jul. 6, 2018 at 9:20 PM
I suspect he was talking about HEROES IN CRISIS coming in September.

Many of you have probably read yesterday's Vanetta Rogers interview of Jeff Lemire over at Newsarama.com. If you missed it, here are the important bits (so far as fans of Booster Gold are concerned):

So, no reason to buy any issues of Justice League United, then. Thanks for that, guys. I'll be saving my money for Future's End, where there's still the chance to see my hero return to action.

You can read the full interview here. Thanks to ctalbot2085 for giving us the link in the Boosterrific Forum.

Didio said on twitter in Aug 2013 "given Booster is from the far future, its unclear whether there are country borders them."(sic)

Jurgens told me something similar when JLI was running but since it was never put in an issue he has recanted.

Presently all we can say about Booster is that he's awesome.

Boosterrific [Official Comment] posted on Mar. 21, 2014 at 6:52 PM
Yes, Booster is awesome, but you'd never know it except for reading his adventures as published by his owner, DC Comics. If they made a character and called him Awesome-Man, you wouldn't have just taken their word for it, would you?

It is a fact that nowhere in published canon is Booster's nationality described as anything other than American.

No matter what DC planned or plans, nothing changes the established fact. Nothing will change that until DC publishes an "in-continunity" story that declares Booster to be anything other than American.

Dan DiDio says a lot of things. He often says things that are intentionally misleading if he thinks it will sell more comic books. It's his job. Even when he speaks the truth about his intentions, things often change between his first statement and eventual publication.

This is not a question of opinion or interpretation or intentions. In canon, Superman is not Jewish although his creator Jerry Siegel thought so. Batman is not gay although Grant Morrison said so a few years back. In both cases, those creators had opinions about their characters that were not printed, and should not be considered canon, especially in that they run contrary to their established adventures as published.

I am not advocating that Booster must remain American. I am not calling anyone a liar. I am not criticizing anything about Canada or the artists or editors who work for DC Comics. I am not telling anyone what to believe.

You are as welcome to think of Booster as Canadian as you are to think that Booster and Beetle were lovers. Just be clear that the facts do not support such an interpretation in the DC Universe.

Therefore, Lemire is wrong in stating that Booster is Canadian. If he has a problem being wrong about that, he is in position to correct it, either by changing his statements or changing Booster's nationality in the stories he writes.

Friday the Canadian newspaper The Star broke the news that Jeff Lemire would be taking over Justice League of America when the team moves to Canada.

That news inspired Booster Gold fans everywhere to ask, "if Booster Gold is really Canadian in the DCnU, will he be joining the team?" The answer is no. (And not just because Booster isn't Canadian.)

CBR: I think the only other Canadian character that's been introduced into the New 52 is Booster Gold. Again, I know you are sworn to secrecy on the roster but does Booster play a role in your book?

Lemire: No plans for Booster. I wish I could talk about my roster because it's my dream team -- a couple of other cosmic characters and some current, fairly major characters will be part of the team.

Geez. Booster can't catch a break, can he?

For the record, still no evidence has ever been introduced in canon to contradict Booster Gold's American citizenship as established in Booster Gold Volume 1. Even ComicBookResources.com admitted as much in their countdown of the Top 10 Canadian Heroes. Given that Booster has made exactly 3 comic appearances in the past year and has nothing on the horizon, it doesn't look like there will be any change to that status in the foreseeable future.

Read the rest of the interview with Lemire here. Thanks to Herbert Fung for being the first to email me on vacation and tell me about this breaking story.

Ed Wood posted on Aug. 26, 2013 at 11:01 PM
Just wanted to let you guys know, that a version of booster gold shows up in the Tumblr web-comic called JL8. I thought it was cute and you should know.

Dr Drepon posted on Aug. 27, 2013 at 10:19 PM
Oh, I hope Booster can be Canadian anyway. Like, maybe if Canada is larger in the future and contains Metropolis and Gotham and such

Boosterrific [Official Comment] posted on Aug. 27, 2013 at 11:54 PM
There's no evidence that Micheal Jon Carter couldn't be a natural born citizen of Canada. (We've never seen his birth: he could have been born north of the border.) But his 20th century alter ego "Booster Gold" (his "public identity") was created in America by the President of the United States of America. Booster Gold very clearly has US Citizenship.

Boosterrific [Official Comment] posted on Aug. 29, 2013 at 10:33 PM
Exactly, Herb. And maybe he did. But there is no proof that it did happen. So until DC publishes a story explicitly making the change clear, I'm assuming nothing has changed.

An overwhelming majority! Well, let's put that issue to rest and never speak of it again.

Last week's poll question: Of what country do you believe Booster Gold to be a citizen? (51 votes)

With Booster completing two, separate 3-issue stories this month, it is only natural that we compare them. What did you think?