As you may have heard, the Batmobile from the 1966 Batman television show last month sold for over 4.2 million dollars (plus auction fees). That sounds like a fair price for the most famous one-of-a-kind car in the world. I can't imagine that there are many cars that would be more valuable, unless there really is a talking Knight Industries Two Thousand out there somewhere.

You know what car I'd rather have? A Brysler-Booster Mark IV. If I had a spare $4 million lying around, I would spend that money building Booster's signature automobile. (I'd say I'd spend that money on a time-travelling DeLorean, but I'm afraid I don't have the math background required to cobble together a flux capacitor.)

I love the open cockpit and the "Booster" striping. The most important part would be the custom interface for Skeets in the rear. While I'm sure that there are some who would like their robot co-pilot to be an R2 unit, I'd definitely take Skeets any day of the week — and twice for a Sunday drive!

If the Batmobile is your thing, you'd probably enjoy spending some time at BatmobileHistory.com. I have to admit, it's an admirably thorough catalog of the many, many Batmobiles used through history, including the model that Booster stole in Booster Gold, volume 2, #12.

Earlier this week DC Entertainment announced that they had partnered with Kia Motors America to create five one-of-a-kind customized cars featuring Justice League characters. The press release announced that these "radical machines" were created utilizing Jim Lee's Justice League designs in order to promote DC's "We Can Be Heroes" charity campaign. "We Can Be Heroes" supports of Horn of Africa hunger relief. The cars will be auctioned off later this year with proceeds going to the campaign.

When I hear "Justice League character" and "radical machine," I think "Boostermobile." However, given that DC's latest custom vehicles are destined for a charity auction, it's understandable that our favorite Corporate Crusader would be reluctant to donate his beloved Boostermobile to any cause that didn't profit Booster Gold.

These cars were unveiled Tuesday at the 2012 SEMA trade show in Las Vegas. While I gotta admit that a car show seems a good place to show off some sweet customized cars, SEMA shows are not open to the general public. If the goal of these cars was really to "raise awareness" of your campaign, DC, maybe you should try just driving them down the street instead.

Comments (0) | Add a Comment | Tags: boostermobile cars charities news we can be heroes

This Day In History: Drive a Boostermobile!

No would-be hero can consider himself a success without a signature vehicle. Batman has his Batmobile; Spider-Man, his Spider-Mobile; and even Superman, the Supermobile. Naturally, Booster Gold would want to have to have his eponymous means of transportation. Too bad this will turn out to be just another lesson for Booster Gold in being careful in what he wishes for. 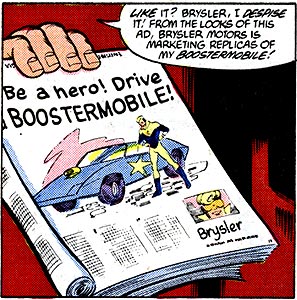 When Booster Gold discovered that Jeremy Brylser was marketing civilian models of his unique Boostermobile to the general public, Booster balked. Ostensibly, Booster claimed to be concerned about the liability issues, though we have since learned that shouldn't have been an issue. So what really kept Booster from allowing the common man the opportunity to own their own Brysler-Booster Mark IV vehicle? Pride? Guilt? Greed?

Xylob posted on Sep. 18, 2012 at 1:03 PM
NICE! I just read this issue on Sunday - I've completed my collection and now that the gaps are filled I'm digging in to the glory that is Booster Gold.

Law and the Corporate Crusader

Late last week, Law and the Multiverse addressed my question of Booster Gold's liability in the case of misuse of the Brysler Motors' Boostermobile:

Walter writes "I'm curious about the Boostermobile, an automobile in the DC Universe endorsed by Booster Gold. In Booster Gold vol. 1, #11 (1986), Booster becomes concerned that his endorsement of the car (manufactured by Brysler Motors under license of Booster Gold's Goldstar, Inc.) may result in his becoming liable should a supervillain use the car for nefarious purposes [Ed. or if it's simply defective]. Is there any merit to Booster's fear?"

In practice the answer is likely to be 'no,' but if someone is asleep at the switch then the answer could be 'yes.'... For example, what if Booster got involved with some people who wanted to start a new car company?

The site goes on to lay out a sample scenario where Booster could indeed find himself in jeopardy, but I won't spoil the details. You can find the rest here, under the heading "Superhero Product Endorsements," if you're interested.

If you aren't familiar with lawandthemultiverse.com, I recommend that you pay them a visit. They have considered such legal issues as Bruce Wayne's publicly funding Batman and whether Lois Lane can be legally forced to reveal that her husband is Superman. It's the sort of comic books fun that I think fans of Booster Gold will probably enjoy.

Comments (0) | Add a Comment | Tags: boostermobile law and the multiverse