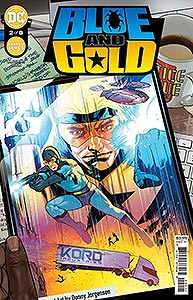 Cover Description: On the $3.99 standard cover by Ryan Sook, Booster Gold and Ted Kord are seen in a handheld tablet. (This issue has an alternate, $4.99 cardstock cover promoting The Suicide Squad movie that has nothing to do with the contents of this issue and does not depict either Booster Gold or Blue Beetle.)

Issue Summary: After rescuing Booster Gold and Skeets from a runaway truck, Blue Beetle joins his friend in thwarting the theft of Kord Industries materials. As a reward, Ted Kord is fired from his job while at the same moment Booster Gold is announcing a new business venture in which the average person can employ a hero on demand. Reveal Potential Spoilers

Page 4, panel 4
Unconscious and strapped to the top of a runaway, self-driving Kord Industries van, Booster Gold is saved from a certain death by the timely arrival of his best friend Blue Beetle in his "all new bombastic, bodacious" Buggy!

Page 6, panel 1
Beetle pulls Booster to safety before the van runs over a coastal cliff but is unable to do anything for Skeets. This is hardly the first time that Skeets has appeared to have been destroyed in an explosion. Longtime readers may remember that Skeets was "killed" by Blackguard at the end of Booster Gold #2 way back in 1985. This time, readers have to wait four whole panels...

Page 6, panel 5
...to learn that Skeets is fine thanks to an assist by Beetle.

Page 6, panel 6
POWER DOWN: Skeets reveals that it was unable to free itself from the truck quickly because it was "armored with a promethium alloy." In the DC Universe, Promethium is an artificial alloy that is functionally invulnerable. Interestingly, Promethium debuted in The New Teen Titans #9, 1981, where manufacturer Dayton Industries promoted it for "creating a virtually indestructible car to eliminate accidents." I'm sure that the Kord Industries van here used as a death trap is an intentional irony; Dan Jurgens has been dropping Teen Titans Easter eggs (like Blaze Comics' Astro Teens) in Booster Gold's adventures since the beginning.

Page 8, panel 2
Booster fantasizes about a reenactment of the "Death of Superman" as originally depicted in 1992's Superman #75, written and drawn by one Dan Jurgens. In Booster's imagination, he plays the role of Superman, and Blue Beetle is Lois Lane. Booster should keep in mind that he faked his own death in 2006's 52 Week 15, and unlike Superman's glorious return, his own public reputation has remained in tatters ever since.

Page 9, panel 3
HIS STORY: Booster is qualified to criticize Gotham City; he was born there. Or, at least he will be in the year 2442.

Page 9, panel 6
PRODUCT PLACEMENT: No one knows a marketing opportunity like Booster Gold! He had his own commercial car model once: the Brysler-Booster Mark IV from Brysler Motors debuted in 1986's Booster Gold #5. (What's the chance that this "Todd" Booster knows is Todd McFarlane, founder of the McFarlane Toys which signed a partnership with Warner Bros Consumer Products in July 2021? What's the chance we'll be getting a new Booster Gold figure in 2022?)

Page 13, panel 3
While at a remote airfield in the Adirondack Mountains foiling a theft of Kord Industries technology, Booster Gold addresses his followers via a livestreaming Internet feed of the action being broadcast by Skeets. Five watchers are seen in this panel, presumably radioz, she kat, jdj, and t-grrl. Also returning from the previous issue are unseen commenters b-bo, bill, dubba, gawd, gg, outliar, radiojoe (spelled "radiojo" in Blue and Gold #1), and zblah.

Page 22, panel 1
"Heroes for Hire" has been a Marvel Comics superhero team since Power Man and Iron Fist #54 in 1978. That team, a for-profit superhero service also in New York City, was founded and run by best friends Luke Cage and Iron Fist. Booster's plan differs from theirs only in that he doesn't plan to charge clients for services provided, instead relying on donations from philanthropic donors (in this case, Kord Industries).

Boosterrific Review: Yes, Booster is reverting to bad habits (again!), and yes, the overall plot seems to be flowing like molasses, but I am very much enjoying following Beetle and Booster on their misadventures. Sometimes it is enough to just hang out with old friends