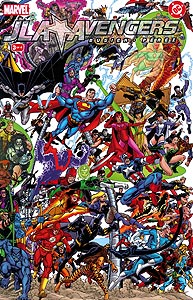 Cover Description: Every character who has ever been a member of the Marvel Comics' Avengers or the DC Comics' Justice League appears on this wraparound cover. Booster Gold is on the far left of the back cover, wearing his original power-suit.

Brief Synopsis: A crisis across dimensions leads to a confrontation between the Avengers and the Justice League.

Issue Notes: Booster Gold appears in this issue, though it is not the Booster Gold whose adventures have been chronicled in DC Comics since 1985. This Booster Gold is a member of an alternate timeline created by events within this mini-series. This issue is an inter-company crossover between DC Comics and Marvel Comics.

Story Notes: The title of this issue is a reference to a DC Comics series which included stories about the Space Museum, the museum from which Booster Gold originally stole the items that give him his powers.

Issue Reprints: This issue has been reprinted in JLA/Avengers. 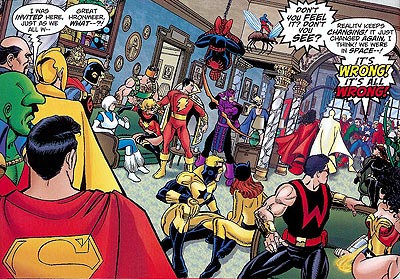