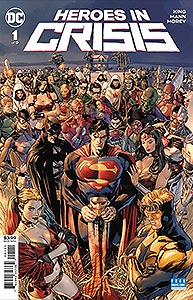 Cover Description: This book has at least 4 different covers. Booster Gold is seen on two of them, and his goggles appear on a third (worn by Harley Quinn).

Brief Synopsis: Booster Gold and Harley Quinn fight in the aftermath of a slaughter in the Sanctuary program.

Issue Summary: Booster Gold is eating in a diner in Gordon, Nebraska, when he is attacked by Harley Quinn. While they fight, Superman, Batman, and Wonder Woman arrive on the scene of several dead super heroes. Harley and Booster blame each other for the slaughter. Reveal Potential Spoilers

Page 1, panel 1
Booster Gold is sitting, in costume, at a counter drinking coffee in Rich's Cafe in Gordon, Nebraska. The diner is decorated in stereotypical kitsch Americana, including references to several 1970 and 80s television shows. For example, the white Hawaii license plate over the nearby unisex bathroom door reads "ROBIN-1," which was the license plate of the Ferrari 308 GTS driven by Thomas Magnum on the television show Magnum, P.I.. The nearby blue California license plate "853 OKG" was the plate number of Jim Rockford's Pontiac Firebird on the television show The Rockford Files. Both of those shows were about detectives. Perhaps unrelated, the waitress behind the counter, Shirley, is dressed similar to the cast of television's Alice.

Page 1, panel 4
FASHION ALERT: Harley Quinn walks into a diner... is not the start of a joke. Though Harley is sometimes considered an anti-hero, Booster makes it clear that he considers her a villain. Both of their costumes are badly slashed, indicating that both have recently been in some sort of combat. How Harley found Booster in this remote location is not revealed. (For the record, this is the first time that Booster and Harley have exchanged words in a mainstream DCnU comic.)

Page 10, panel 5
POWER DOWN: After eating a piece of peach pie — for four pages — and quoting the Sigmund Freud, Harley ambushes Booster, stabbing him in the back and forearm with an unusually sharp piece of dinnerware. At no point does Booster use his force field to defend himself, only his Booster Shots (which blow out all the windows in the diner). 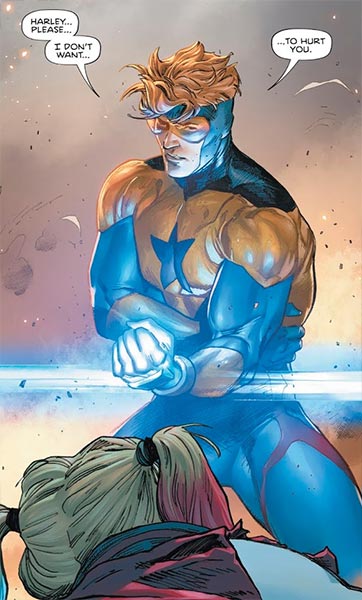 Page 17, panel 3
Booster decides to take Harley into custody and flies her directly up through the roof of the cafe. That's a lot of property damage, Booster. Are you sure Harley is the villain here?

Page 20, panel 1
POWER DOWN: To escape, Harley stabs Booster in the neck. This understandably disrupts his ability to concentrate on mentally controlling his Flight Ring and, as a direct result, the pair fall out of the sky. Back-of-the-envelope math indicates that they are approximately 1,000 feet up and will hit the ground in about 8 seconds.

Page 23, panel 1
SPOILER WARNING!: Somehow, Booster has saved both himself and Harley Quinn, though they both look much the worse for wear. Each blames the other for murders seen elsewhere in this book. (Why does it seem that everything significant in this issue happens off panel?) Reveal

Page 24, panel 3
In a flashback in the style of a reality show confessional, Booster Gold finally explains what Sanctuary is. (More or less.)

Boosterrific Review: To say this issue is light on content is an understatement. If you read the advance solicitation for this issue, you learned more about the story than what this book tells you. What exactly was Sanctuary? What happened? Who are the suspects? How many issues will we have to wait to learn the answer to any of those questions? At least while we're waiting, we can admire the fantastic art by Clay Mann and Tomeu Morey.