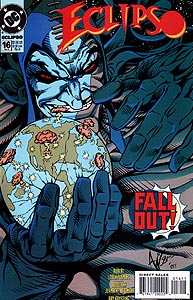 Brief Synopsis: Bruce Gordon and Amanda Waller assemble some of Earth's greatest heroes to tackle the growing menace of Eclipso. 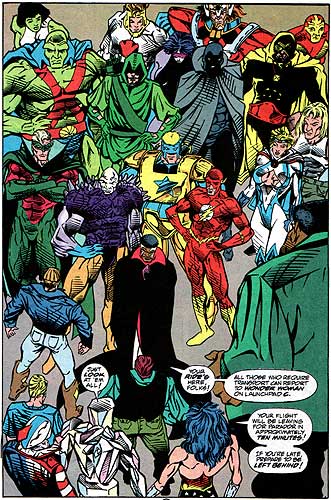 Page 22, panel 1
Mona Bennett joins the assembled heroes by unnecessarily destroying a wall of the JLA Headquarters. Haven't you heard of doors, Mona?

Boosterrific Review: This issue is painful on the eyes. Flemings' dialogue and plot is every bit as bad as Newman's pencils and Kryssing's inks. (It is a shame that legendary DC letterer Gaspar Saladino was involved in this mess.) The highlight of the issue is the side story of the Phantom Stranger's quest to recover Eclipso's black diamonds, a horror tale more aligned with the art and dialogue than the science-fiction genre of the Shadow Fighters in the main storyline.